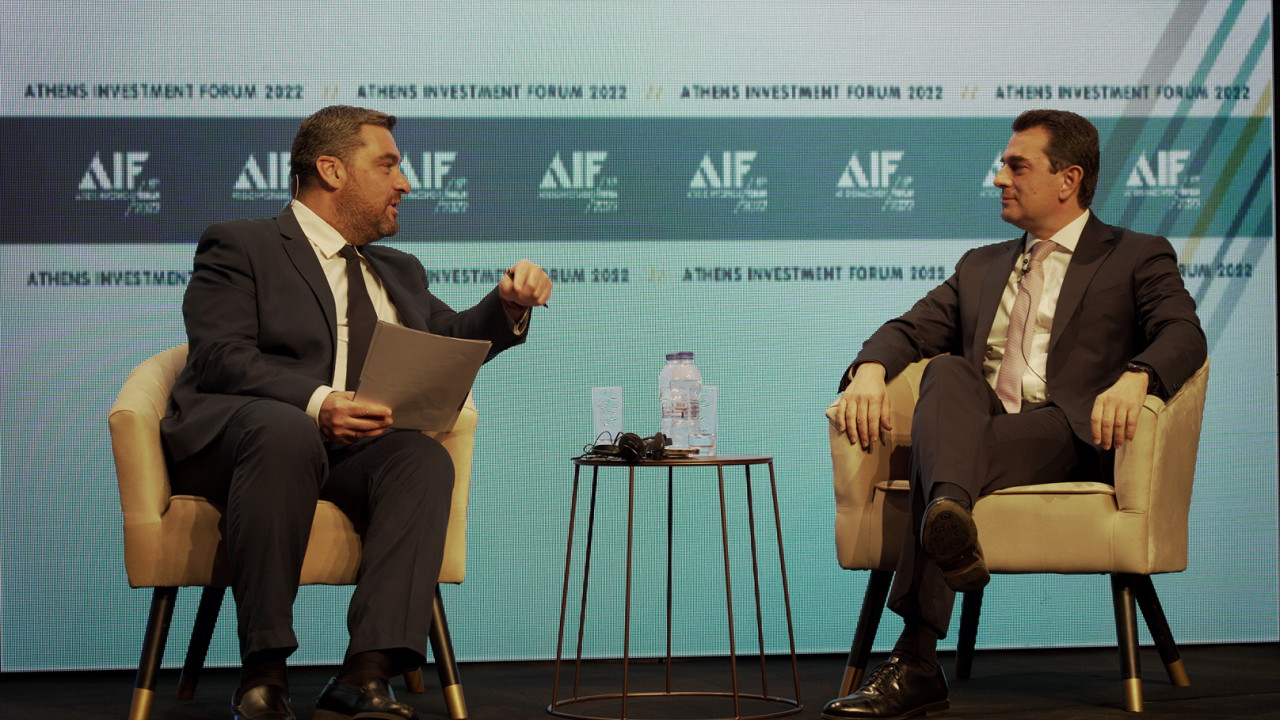 Skrekas: Greece will become an exporting power in natural gas if deposits are found

“Energy sufficiency equals security of supply. It means different sources of supply and diversification in the type of energy we use”

“Greece will become an exporter of natural gas if deposits are found”, said the Minister of Environment and Energy, Kostas Skrekas, in the speech at the 5th Athens Investment Forum, and added that: “Greece entered the energy map of the Balkans in 2012 with the project of TAP”.

According to the minister: “Energy sufficiency is equivalent to security of supply. It means different sources of supply and diversification in the type of energy we use.” As he said: “We have greatly reduced our exposure to Russian gas. We are completing seismic surveys in five fields of the country, with the aim of becoming a natural gas importing country, if the estimates for the fields are verified.”

In addition, Mr. Skrekas also referred to the green energy projects that are being completed: “This year we will connect 2,000 MW to the grid. In 2026 we want 60% of electricity to come from RES.

The revised ESEK states that in 2030 80% should be produced from RES.

We currently have 10 GW installed which means we need to build an additional 18 GW to get to 28 GW, and 7-8 GW of storage, pumped storage and batteries will also be needed.”

Finally he said that “we are constantly trying to fight the bureaucracy for RES projects”.

As he said: “It’s a never-ending effort. Our job is to identify obstacles and eliminate them.”

G. Agrafiotis: We must without hesitation insist on RES

For his part, in the same discussion panel, the deputy managing director of TERNA ENERGY, Giorgos Agrafiotis stated that “natural gas is a geopolitically charged fuel” and added that “because it is fully imported, the markets it participates in and its cost they are difficult to tame, while also requiring huge investments.”

He emphasized that “electrical networks must be developed, but if they are not based on a strong internal network, they can be an empty letter”.

He concluded by saying that, “in the midst of the crisis, when we looked for RES, to help reduce the cost of electricity, we realized that there are few of them. They are needed in much larger quantities in order to contribute to the end consumer’s energy costs,” he said. “Storage is an absolutely necessary factor. We must insist on RES without hesitation. It needs storage of all kinds and a large amount,” he emphasized.

I. Karydas: The value of connections has been recognized throughout Europe

The managing director, Renewable Sources and Energy Storage Business Unit, COPELOUZOS GROUP, Ioannis Karydas, emphasized that: “One of the most important pillars of the European energy policy is the electrification of the networks and their supply with clean energy.”

As he said: “Until recently, Europe had not given the necessary weight to electrical interconnections”, while he added that: “In order to achieve the European goals we must see how we will achieve a greater penetration of green energy”.

In particular, as he pointed out: “The project we are promoting (connecting Greece – Egypt), goes beyond the narrow framework of Greece, it is a project for all of Europe. The project contributes to de-dependence on natural gas and will highlight the country as a green hub” and closed by saying that: “The value of interconnections has been recognized by all of Europe”.

V. Papakonstantinou: Greece is in the ideal position to achieve energy self-sufficiency

In his presentation, the managing director of MORE, Viktoros Papakonstantinou, emphasized: “Today as a country we are in the ideal position to achieve energy self-sufficiency and security. I consider it positive that the discussions on the energy transition are intensifying”.

As he said: “The energy transition requires large investments. There is an estimate of the need for 500 billion euros to achieve zero greenhouse gas emissions by 2050.”

He also stated: “The overwhelming majority of investments will come from the private sector” and added that “the environment in which these investments will take place is very important.” In closing he pointed out that: “Motor Oil’s expansion into the renewable energy sector was a conscious decision.”

B. Grigoriou: Hydrogen is becoming a very cheap fuel

The president and CEO, ADVENT TECHNOLOGIES, Vassilis Grigoriou said: “In the future we will go to an environment where fuel cells will play a very big role, as conventional batteries cannot meet the real needs as they are too heavy.” “Hydrogen is a destination fuel, he said, adding that it is shaping a new industry that will create thousands of new jobs.”

D. Nektarios: The energy transition is a one-way street

Partner, Financial Advisory, DELOITTE, Dimitris Nektarios characteristically stated: “The energy transition is a one-way street and there is only one direction”.

In particular, referring to research findings, he said: “For the achievement of zero emissions targets, optimism is rather widespread, with more than 85% of business respondents believing that reaching 2050 or even 2030 is still an achievable goal”.

“The crucial second point of the energy transition has to do with the question of who will be asked to bear the costs.

The answer to that question, at least within the business world, was: “Everyone.” This cost should be shared between government agencies, state agencies, investors, businesses, consumers. It is only through a process of participation that the energy transition will be able to be achieved,” he said characteristically.