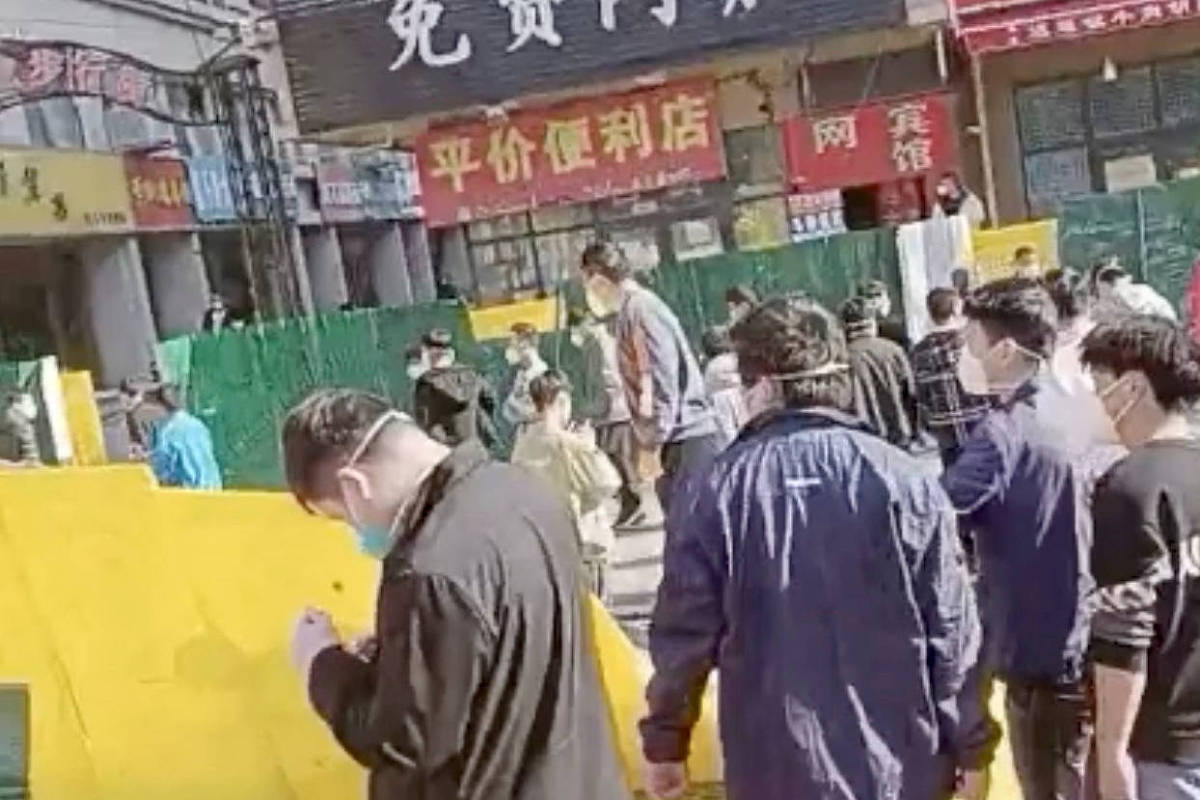 Hundreds of workers joined protests in China at an iPhone factory owned by Apple supplier Foxconn, with some men smashing surveillance cameras and windows, according to images posted on social media.

The rare scenes of public dissent in China mark an escalation of unrest at the factory in the city of Zhengzhou, which has come to symbolize a build-up of frustration with the country’s strict Covid-19 rules, as well as the inefficient handling of the situation by the largest third-party manufacturer. of the world.

The trigger for the protests, which began on Wednesday, appeared to be a plan to delay bonus payments, many of the protesters said in live broadcasts. The videos could not be immediately verified by Reuters.

“Pay us!” chanted the workers surrounded by people in full protective suits, some carrying batons, according to video footage. Other footage showed tear gas being fired and quarantine barriers being knocked down by workers. Some complained that they were forced to share dorms with colleagues who tested positive for Covid-19.

Foxconn said in a statement that it had fulfilled its pay contracts and that reports of infected employees living at the facility with new hires were “false”.

“In regards to any violence, the company will continue to communicate with employees and the government to prevent similar incidents from happening again,” the company added.

A source familiar with the situation in Zhengzhou said production at the factory was unaffected by worker unrest.

Reuters previously reported that Foxconn aimed to resume full production at the Zhengzhou factory in the second half of November.

While the protests have added “uncertainties” to the target, the source said the company is still working towards achieving it, adding that “only a portion” of new employees took part in the unrest.

A second source familiar with the matter, however, said Foxconn was unlikely to hit the target, given disruptions brought on by the unrest, particularly impacting new workers hired to fill the gap in the workforce.

Discontent with strict quarantine rules, the company’s inability to contain outbreaks and poor conditions, including food shortages, have seen workers leave the facility since the company imposed a so-called closed-loop system in late October. In this system, the team lives and works on site.

Foxconn is Apple’s largest iPhone supplier, accounting for 70% of devices worldwide. The company makes most of its phones at its Zhengzhou plant, which before the unrest employed about 200,000 people, although it has other, smaller plants in India and southern China.