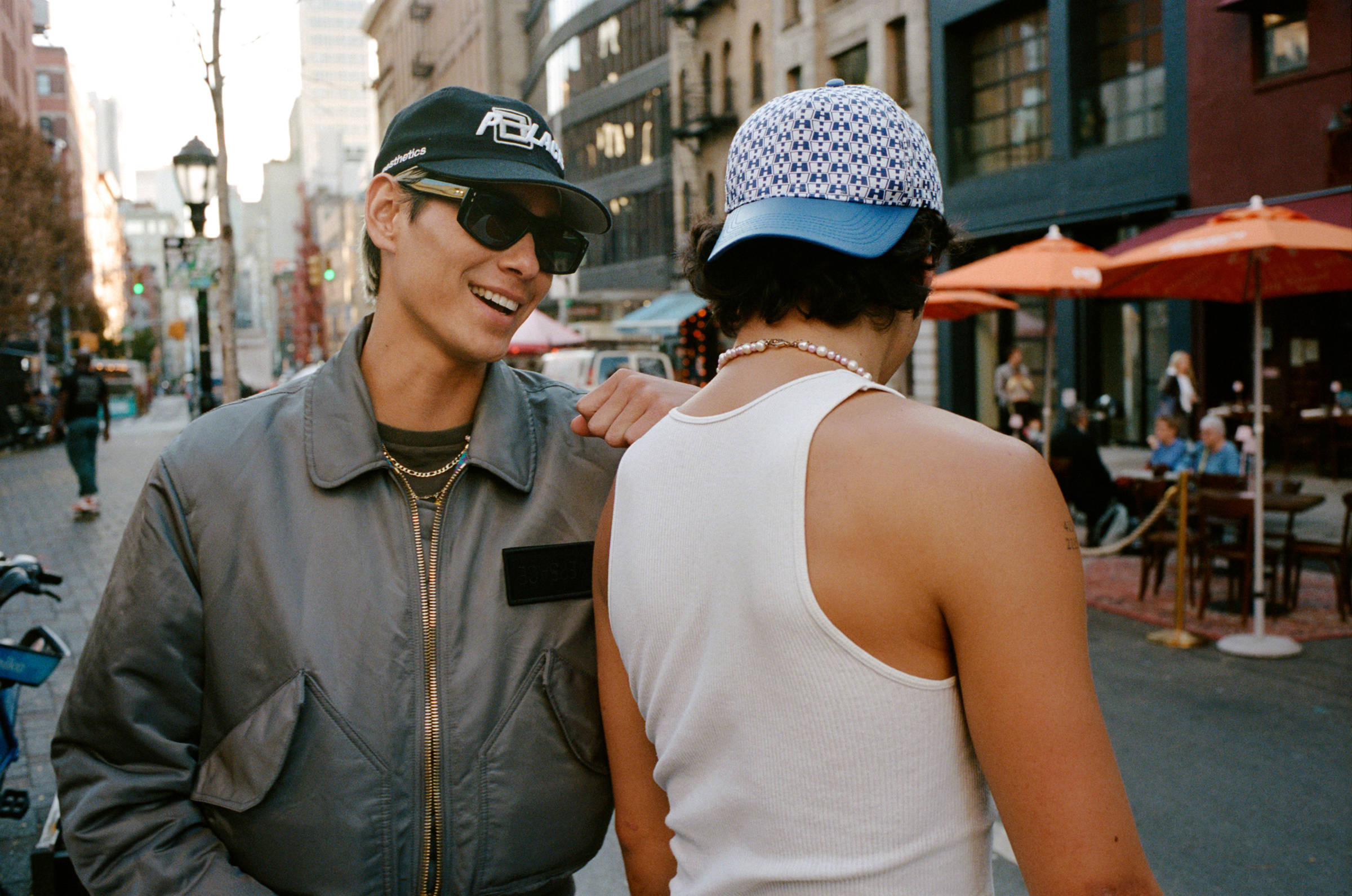 Evan Mock was trying to do laundry in his East Village apartment the other afternoon, but something was wrong with the dryer. Annoying beeps interfered with the retro soul playing in her spacious third-floor apartment. The dryer would start working and then stop. He proposed a theory, involving an accumulation of lint and a faulty filter.

Mock, 25, is perhaps best known for his role in the revamped version of “Gossip Girl,” as a pink-haired bisexual teen who loves Tarkovsky, was raised on Park Avenue, and is the son of a right-wing media mogul ( the series returns to HBO Max for its second season on December 1). But there are many other things going on in the life of the now New Yorker.

One of the kings of the “collab”, he has already worked with brands such as the Danish jewelry company Pandora and the Italian shoe designer Giuseppe Zanotti. He has modeled for fashion designers such as Paco Rabanne and Virgil Abloh. His skateboarding prowess earned him a strong sponsorship from Hurley and a rare moment in the spotlight on Frank Ocean’s Instagram. A few months ago, he created a fashion line called Wahine with designer Donté McGuine.

Mock is a legitimate all-rounder, a permanent fixture on the party circuit, an official charming boy and a coveted man in town. And now, he also has hair with dyed blonde ends.

Despite the pretentious curriculum, Mock is laid-back. Serene. The bright sunlight streaming in through his large apartment window caught him reclining on a couch. “Sometimes the glare is too bright,” he said, of the intense sun. “But I don’t complain.”

Mock took a sip of coconut water from a Tetra Pak container. His feet were up in North Face x Paraboot shoes, a limited-run model released last month — the one with vulcanized rubber soles, quilted leather coverings and elastic bands, a model that was exclusive to the point of not being for sale. . As urban fashion website Hypebeast reported, “In short, it’s something you can’t buy.”

As a child, Mock often went barefoot. Born and raised on the North Shore of Oahu, his father started teaching him to surf when he was two. “I caught my first wave before I learned to swim,” he said.

He was homeschooled into his teens so he could devote as much time to surfing as possible. Around age 11, he started skating (“kind of late,” he commented). At age 16, he earned more than US$ 1,500 (over R$ 8,000 at current exchange rates) per month with his skate sponsorships. Mock then moved to California to pursue what he called his “skater dreams” (he used air quotes to qualify the phrase “skater dreams”).

Traces of her modeling career are dotted around the neat two-bedroom, two-bathroom apartment. On the kitchen counter is a Louis Vuitton bag — the brand he walked for in 2019. In the corner of the living room, an overflowing Rimowa suitcase. He wrote, co-produced and starred in a commercial for the German luxury luggage brand last year.

The commercial shows Mock skateboarding in Manhattan, carrying a Rimowa suitcase, while he narrates in audio a lightning romance with a girl he met in front of a nightclub in Barcelona. Dazzled by her beauty, Mock says he bought a ticket on impulse for her to accompany him to Paris. But a lost passport, a brief stint in airport jail, and a six-hour flight delay put an end to their romance.

Across the room, next to a pile of shoeboxes, what initially looked like just a regular McDonald’s Happy Meal box turned out, upon closer inspection, to be a box of collectible Cactus Plant Flea dolls. Market x McDonald’s. The dolls created by the urban fashion label (originally sold for around US$10, or R$54) have since been offered on eBay auctions for more than US$25,000 (R$135,000), although prices have dropped significantly. since then.

Mock got up to clean the dryer’s filter. “Let’s ride a bike,” he proposed.

He uses his VanMoof electric bike a lot. The day before, the actor had cycled to uptown Manhattan for a “Gossip Girl” dialogue correction shoot, then headed back to the Lower East Side to visit a Japanese whiskey bar on Chrystie Street he was thinking of investing in. .

“We could go to the Curbs,” said Mock, referring to a section of Lafayette Street that has become popular with New York skaters because its triangular layout offers plenty of drop-offs for tricks.

He began to change, replacing his white T-shirt with a dark gray Number Nine “vintage” T-shirt. Above the breast pocket, a speech bubble contains the word “cigarette”. “That was a pretty cool Japanese brand at the time,” Mock said of Number Nine. “People in Japan know what’s going on.”

He put on and then took off a “hoodie” that he designed himself, a Wahine sweatshirt with a front zipper. On the front is an outline of a Valentine’s heart around an unprintable word in The New York Times. “I made the drawing on a friend’s bathroom wall and then photographed it,” Mock said of the drawing’s origin.

He completed the look with a pair of dark Palace jeans, a pair of Nike Air Adjust Force Ambush edition sneakers, a silver jacket, a Palace hat and Isabel Marant sunglasses. On the street, he glided through Alphabet City on his next-generation bike, packed with smart technology. Mock pedaled the entire time with one hand hidden in the pocket of his open jacket.

Near the REI store, he nimbly crossed Houston Street to kiss hello to photographer Gray Sorrenti, who happened to be passing by with actress and model Blue Lindeberg. The chance encounter took place directly in front of the 70-by-60-foot Calvin Klein billboard on which, a year ago, the image of Mock beamed down at the NoHo neighborhood wearing nothing but black boxer shorts and tattoos on his thighs.

Rounding the corner, into the Curbs, he greeted a couple of acquaintances and settled himself on a bench. Between sips of the smoothie, he talked about “Gossip Girl.” The original CW series, which ran from 2007 to 2012, was “before my time,” he said. And when the “showrunner” of the revamped HBO Max version, Joshua Safran, told him about playing the role of Aki Menzies, Mock had never worked as an actor.

“It was a lot of new experiences,” said Mock. “When I first read the script, I thought it was completely different from my real life. In terms of living in a cold place, going to private school, the whole drama.”

He paused. Then he resumed thinking: “It’s funny, because I never really went to school. But the character is basically me – except that he’s filthy rich, goes to private school and lives in Manhattan.”

On his first day of filming, he had to shoot a sex scene with Emily Alyn Lind, the actress who plays his girlfriend. The situation, already inherently embarrassing, carried the added discomfort of being happening in September 2020. In between scenes, cast members wore K95 masks and plastic coverings over their faces. The actors spent their breaks isolated in a room, alone, until they were called back to the set. “But honestly, I’m kind of glad it turned out that way, because it helped get the weird stuff out of the way,” Mock said. “I hope that from now on everything will be, shall we say, normal.”

He saw a skateboarder take a tumble outside Jack’s Wife Freda bistro. The actress and model Lindeberg went there again. That’s something Mock loves about New York. “You basically have no choice but to meet all your homies wherever you go,” he said. As if the meeting was scripted, another friend, actor Nico Hiraga, appeared on a skateboard, accompanied by a third skater friend, George Hemp. “How about we go play pool?” suggested Mock.

Hiraga and Hemp rented Citi Bikes and the group headed north. The three used one hand to guide their bikes almost all the time. The tour was punctuated by occasional new encounters. In St. Marks Place, Mock stopped to hug his brand agent, Jenelle Phillip, who was eating alfresco at Café Mogador. On East 10th Street, at the edge of Tompkins Square Park, he stopped to chat with skate documentary filmmaker Greg Hunt, who was there with his camera, trying to take advantage of the good light. Mock said he had seen other familiar faces on the 12-block journey, but he couldn’t stop to say hello.

The night was beginning when he and his friends arrived at the Ace Bar on East Fifth Street. “Getting Bigger” was playing on the big screen over the Skee-Ball machine. “I love that movie,” said Hiraga, smiling. “I’m living in an age of sagas.”

A few meters from the pool table, a man was posing as if in an opposing position, beer in one hand and the other hand resting firmly on his hip. Mock said he tends to adopt a similar stance, with one hand on his hips. Skateboarders have a certain posture—Mock offered the word “feminine” to describe it, but then agreed that it’s actually a more fluid posture, a specific grace that comes from being in constant negotiation with gravity.

He added that he has already broken each arm three times. In one of his falls, he broke four fingers. What happens, explained Mock, is that you learn to fall.

“When you see skaters go down, it looks like Bruce Lee fighting water,” Mock said. “When you fall like that, you get reflexes after a while. You can protect yourself most of the time, but sometimes you just can’t.”

Is breaking bones scary? “It’s part of what we do,” he said. “It’s something you know is going to happen.”

He went back to the pool table, adjusting his Palace pants, more or less held together by a leather belt he said he got from “some random guy in Rome”.

Facebook
Twitter
Pinterest
WhatsApp
Previous article
Belgian fans set cars on fire in Brussels after defeat to Morocco; see images
Next article
Thiago Silva fulfills his goal when he arrives in Qatar, praises Tite and talks about being a coach