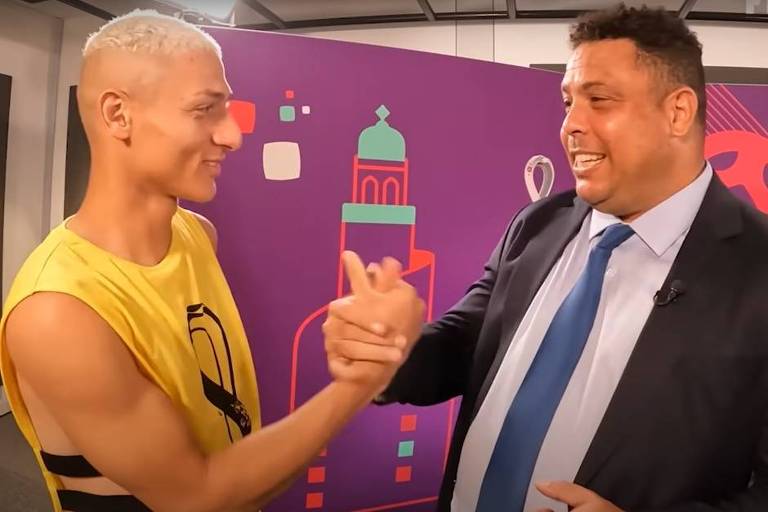 Richarlison cries with emotion when he meets Ronaldo

Richarlison was moved and cried when he found former player Ronaldo for an interview, after Brazil’s victory against South Korea by 4-1 this Monday (5).

“I’m speechless”, said the striker when he arrived at the recording scene for Ronaldo’s YouTube channel. “Wow, I’m thrilled,” he continued awkwardly.

Ronaldo asked to learn the pigeon dance and tried to repeat the choreography that the player usually does on the field, after scoring goals.

Richarlison said that the former player is his idol and that he had only had contact with him briefly, at a Nike event.

“For me you’ve been an inspiration since I was a child”, he said to the former athlete and now businessman.

Crying, he told Ronaldo that his presence in the crowd cheers up the players of the Brazilian national team. “Whether we like it or not, it infects us on the field”.

Ronaldo replied that now it is the striker’s turn to inspire other boys. “You who inspire millions of Brazilians, millions of children with your art, with your goals, with your joy of playing.”

The two spoke about Richarlison’s goal in the match against Korea, the expectations for the next games and the pigeon dance, repeated even by the national team coach, Tite.

The two laughed as they reviewed the scene. “His spine is still a little stiff, but little by little he’s loosening up”, commented Richarlison. “This really demonstrates the atmosphere you have”, praised Ronaldo.

The striker praised the coach for having saved part of the team in the game against Cameroon and said that the strategy was important for the group to act with intensity this Monday.

At the end of the conversation, Richarlison blew a kiss towards Ronaldo’s legs and placed his hands on them as if making a gesture in search of inspiration.

Facebook
Twitter
Pinterest
WhatsApp
Previous article
Thessaloniki: The owner of a beauty salon had placed a camera in the room where the clients were waxing naked
Next article
Tension outside the Thessaloniki courthouse – Strong police forces at the scene