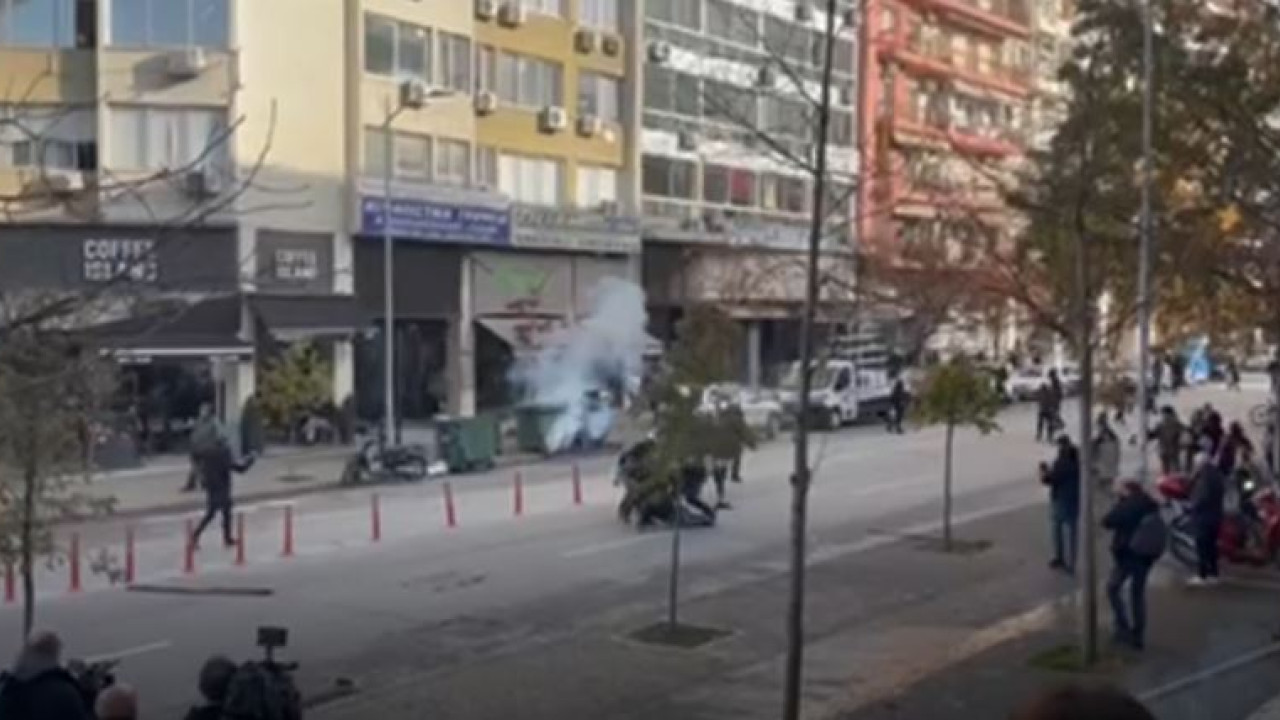 Tension prevails at this time outside the Thessaloniki Courthouse, where relatives of the 16-year-old who was shot by a policeman, as well as sympathizers, have gathered to protest.

Strong police forces have been deployed at the scene to deal with possible reactions.

A little earlier there was a stone war, with the MAT pushing the gathered higher up towards Egnatia.

Criminal charges were brought against the police officer in the degree of felony for attempted murder with possible intent, execution of illegal shots to immobilize or neutralize.

The accused police officer has been referred to apologize to the investigating officer.

Appeal of the physicians of Hippocrates

Meanwhile, the 16-year-old boy who was wounded by a bullet to the head during a police chase is still hospitalized in ICU at Hippocrates Hospital in Thessaloniki, in a serious condition, intubated.

Directors of two clinics appeal for common sense and for the incidents that endangered the operation of the Hospital during yesterday’s shift not to be repeated.

Her manager Pediatric Surgery Clinic of Hippocrate Giorgos Tsikopoulos, invoking his special relationship with the Roma population, appealed for reason to prevail and for the episodes to not be repeated.

“I have a special relationship with the Roma population. I have been operating in this Hospital for 40 years. I have operated on many children with tumors, with inflammations, difficult cases, and I have an excellent relationship with them. To those who are listening to me right now and sending me their thanks, I appeal to reason. Yes, we understand their pain, we understand that there is a child who is having fun, but the reactions should be in the context of decorum, not to escape.

Our Hospital is a tertiary hospital, it treats kidney patients, it treats transplant patients, it is a Covid center. Therefore we cannot destroy it. Yes, understanding, but on the other hand we are asking for a worldly reaction. We also understand the pain, we understand everything”, noted Mr. Tsikopoulos.

Her manager First Pediatric Clinic in Hippocrates, Dimitris Zafiriou reported that for the first time in the history of the hospital, sad events like yesterday happened, which endangered the operation of the Hospital. “In Paediatrics, the little patients were very scared with the bangs and noises. We had episodes inside the Clinic, the parents could not come to visit the children, the Hospital on duty could not receive patients who needed treatment, because they were afraid of all that was happening”, said Mr. Zafiriou and added : “I think that any protest should be held in another place and not outside and possibly inside a public hospital.”

He also noted that he was informed that during the night some people remained inside the Hospital and added: “You understand that this creates fears for all people, even for doctors, who have to move blood, give tests, take care of people who are from the Intensive to Pathological Pediatric Clinics. And of course that causes a huge dysfunction, but the bottom line is that it puts the patients themselves at risk, it takes away the concept of the hospital as we know it. No one can go to hospital. Yesterday, if you were sick you couldn’t go to the Hospital with all that you were hearing and if you hadn’t heard it, coming near you would get up and immediately turn around, and that’s really sad.”

Facebook
Twitter
Pinterest
WhatsApp
Previous article
Richarlison cries with emotion when he meets Ronaldo
Next article
Thessaloniki: The condition of the 16-year-old is critical – Doctors appeal to avoid any complications