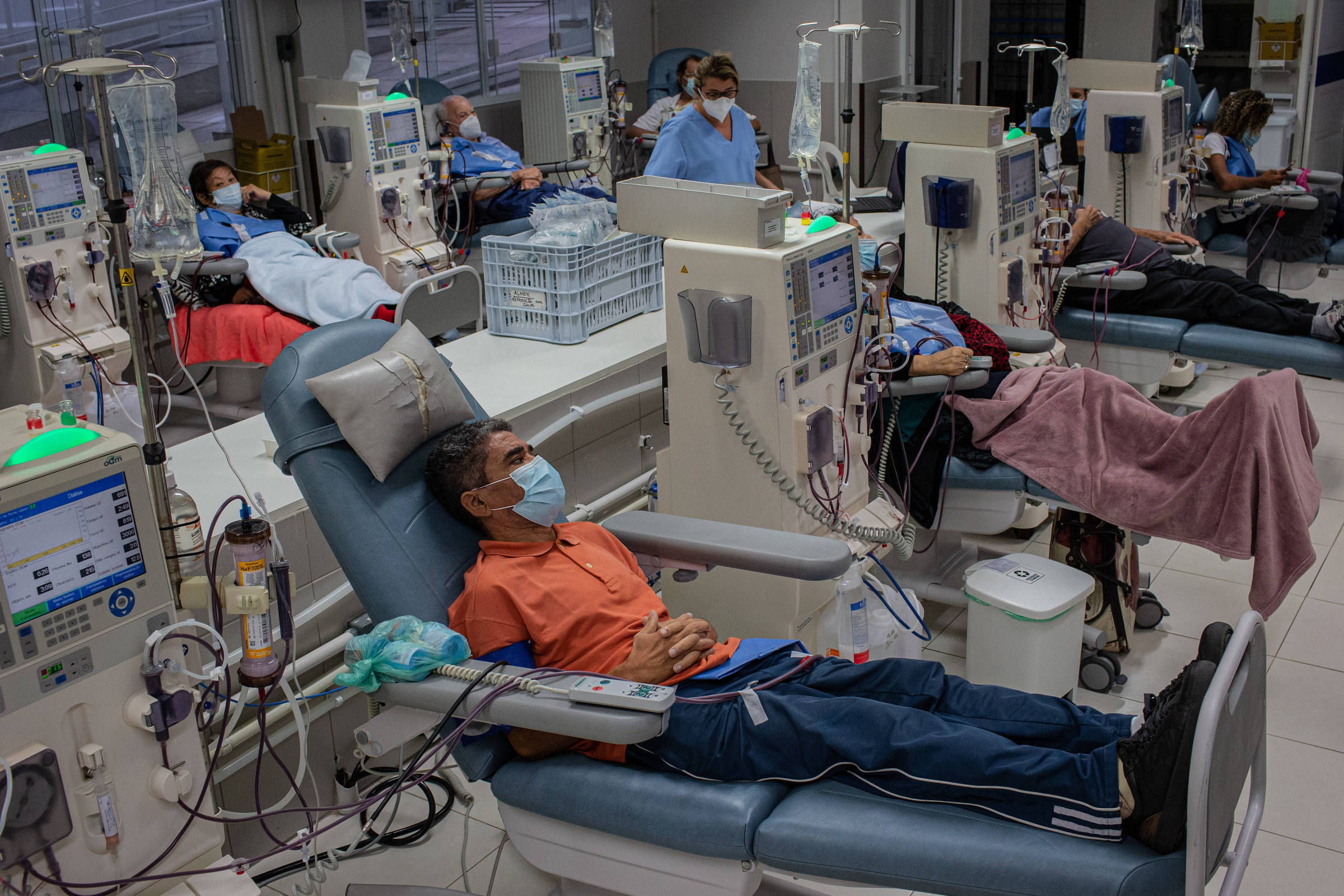 In a letter sent this Thursday night (4) to the Ministry of Health, the largest network of dialysis clinics in the country, DaVita, asks for an emergency meeting with Minister Marcelo Queiroga and informs that the care of 14,000 SUS patients ( Unified Health System) is at risk of being interrupted.

The alert from the network, which has 91 clinics and a vascular access center and serves 350 hospitals in the country, reflects a serious crisis that affects a fundamental area for the chronic kidney patient. In dialysis, a machine filters and cleans the patient’s blood, doing some of the work that the diseased kidney cannot do.

About 90% of the dialysis clinics that serve the SUS are private and receive transfers from the federal government. They report that they had already been dealing in recent years with outdated values ​​of the procedures, but that in recent months, with the rise in the dollar, the increase in the price of inputs and inflation, the scenario was even more aggravated.

The “lime shovel”, in the words of nephrologist Yussif Ali Mere Júnior, president of ABCDT (Brazilian Association of Dialysis and Transplantation Centers), came this Thursday, with the sanction of the nursing salary floor, by President Jair Bolsonaro (PL) .

The bill was approved by the Chamber of Deputies in July and sets the base salary for nurses at R$4,750. Nursing technicians should receive 70% of this amount, and nursing assistants and midwives, 50%.

According to ABCDT, there will be an increase in expenses with the creation of the floor and there is no provision for any counterpart in the transfers to SUS service providers. This has provoked protests from several health employers, as well as mayors and governors.

Currently, dialysis clinics that provide services to the SUS receive R$ 218.47 per session, after an adjustment in December last year of 12.5% ​​in the table. But according to calculations by ABCDT, the cost of the procedure is R$ 303, that is, there is a lag of 39%.

With the nursing floor, the sector estimates that there will be an additional impact of BRL 68 per dialysis session​ and claims that the Ministry of Health compensates for this cost increase. The country has around 800 clinics that serve around 150,000 patients with chronic kidney disease.

“As much as it is a fair demand from nursing, this bill makes the continuity of all care for SUS patients unfeasible if there is no counterpart”, says Bruno Haddad, president of DaVita Renal Treatment. According to him, the floor will generate an increase in costs of R$ 120 million annually to the network.

In the letter sent to Queiroga, Haddad says that if there is no immediate solution to the cost equation, the network, which serves 15% of dialysis patients in the country, will not be able to continue with SUS care.

“The scenario is chaotic. The government has a hard time understanding the risk these kidney patients are running. They cannot go a week without dialysis. If they stay, they die. If we stop, they [governos] have nowhere to put these public sector patients”, says Haddad.

In recent years, at least 40 clinics that served the SUS closed and many face serious financial difficulties, according to ABCDT. “They are all in debt, they are living on [empréstimos] consigned. The worst is the disinvestment of the clinics. The machines are getting old, it is starting to jeopardize the patient’s treatment, which, after all, is his life”, says Ali Mere Júnior.

He gives an example of the impact of high prices on one of the essential inputs in the sector, saline solution, one of the items that is also facing a shortage crisis.

The sector’s crisis comes at a time when the number of patients on chronic dialysis in Brazil has more than doubled, from 65,000 to 144,000 between 2005 and 2021, according to the census carried out by the Brazilian Society of Nephrology.

In the last two years, the governments of Rio de Janeiro, Santa Catarina and Mato Grosso do Sul started to allocate their own resources to complement federal transfers and guarantee the continuity of dialysis services to SUS patients.

Other states, such as Paraná, Minas Gerais and the Federal District, are evaluating similar measures. São Paulo, however, has already informed the sector that it is not in a position to carry out the complementation.

In smaller cities, the situation is even more dramatic. In March, the only dialysis clinic in Conselheiro Lafaiete (MG), with 92% of SUS patients, asked the population for help not to close.

“We reached our indebtedness limit, taking out loans from banks to honor commitments, mainly with our employees. Accounts close with increasing debt each month, we are heading towards total insolvency”, said the Santo Antônio clinic in a statement.

The Clínica do Rim de Vitória de Santo Antão (PE), which serves 100% of SUS patients, resorted to bank loans to pay off debts, payroll and 13th salary. The physicians on duty were reduced by half and the clinic reduced the number of complementary imaging exams for patients.

The Clinefran clinic, in Franco da Rocha (SP), also sought bank loans, reducing the amounts of medical earnings. Investments in building renovation or acquisition of equipment have not been made for more than six years.