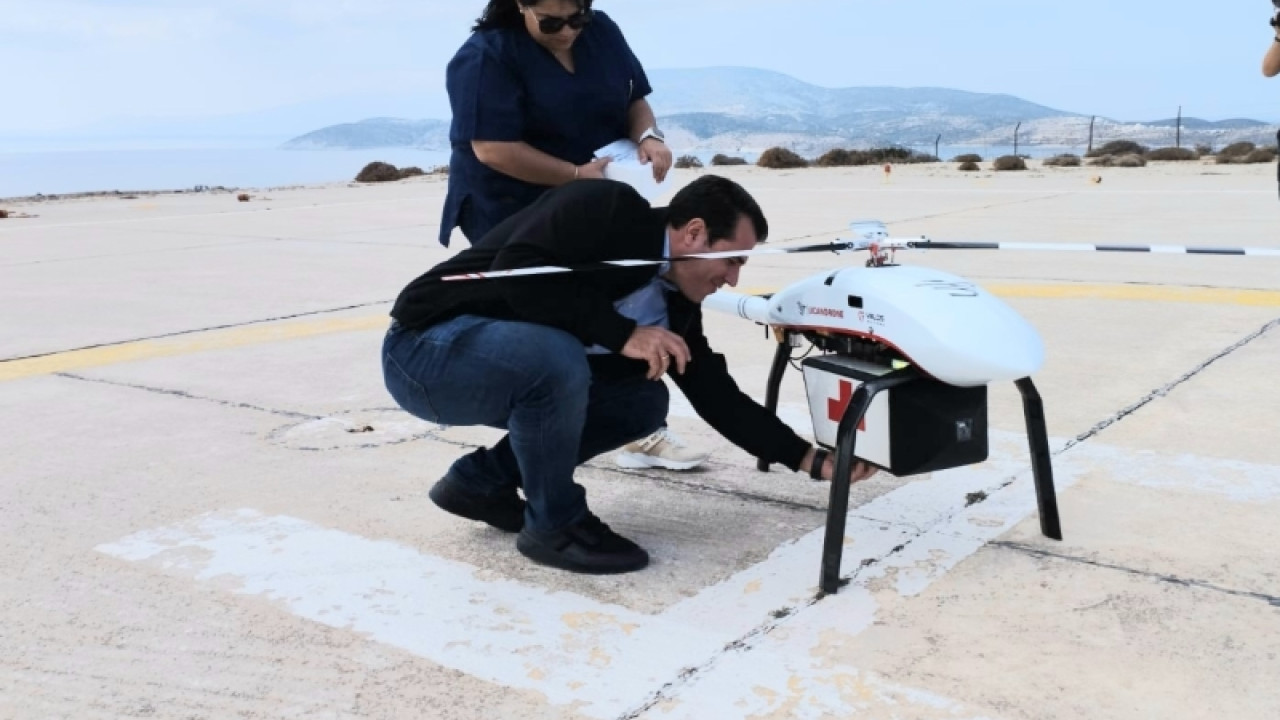 The transport of medicines in the Small Cyclades by drone

This program is implemented on a pilot basis in the Small Cyclades, but the Ministry of Health wishes to extend it to all our small islands.

The Minister of Health Thanos Pleuris participated in the demonstration today transportation pharmaceutical and health material via drone to cover the health services needs of the inhabitants of the small islands of the Aegean. In particular, the Nova company in collaboration with the Greek start-up UCANDRONE transport medical equipment via drone to the Small Cyclades.

The Minister of Health Thanos Pleuris thanked Nova and said “With the use of new technologies, even the residents of the most remote areas have access to health services, without being deprived of benefits. This is an important initiative that has to do with sending medicines and biological material to serve the inhabitants of small islands.

This program is implemented on a pilot basis in the Small Cyclades, but the Ministry of Health wishes to extend it to all our small islands, so that permanent residents and tourists alike feel safe.”

The Commander of the 2nd Health Region of Piraeus and Aegean, Mr. Christos Roilos, stated the following: “The pilot program for the transport of medicines and biological material from Naxos to Schinoussa, Heraklia and Koufonisia started on 18/3/2022. The Unmanned Vehicle flew daily, weather permitting, from Naxos to the Small Cyclades. Our goal was to evaluate the capabilities of the Unmanned Vehicle to meet the health needs of the residents of the Small Cyclades. The pilot operation demonstrated and highlighted the need to exploit the possibilities offered by new technologies to meet the vital needs of our fellow human beings, who live permanently on islands. I am certain that what we have started will continue on a larger scale and in combination with other interventions we are already doing, such as telemedicine, will strengthen the feeling of security of all our islanders and create conditions for equal access to health services for all”.

Mr. Panagiotis Georgiopoulos, CEO, Nova said: “Nova is an emerging large-scale infrastructure provider that not only offers new options to Greek individuals and businesses after many decades, but also helps local communities to use its technology tomorrow, today The ever-evolving 5G network along with the broad ecosystem of partners is helping our country enter the digital age, where all citizens, regardless of where they are, can reap the benefits of technology. The implementation of this innovative project in our beloved Aegean islands highlights exactly this”.

At the same time, the Minister of Health, Thanos Pleuris, inaugurated the Multi-Dynamic Regional Clinic of Schinoussa, which was built with a donation from the Martinos family. As part of the inauguration, the minister watched the digital connection of the Schinoussa Hospital with the Attica Hospital of Athens through the telemedicine network. The Minister of Health stated “The regional clinic which is being upgraded is very important for the island. Prevention is done through the regional clinics and it is important that citizens come to get the tests done quickly and that we find any health problem that may exist in time.

I also want to thank the municipality for the concession it has made and of course the family of Constantinos Martinos, especially for the case and in general because the family has embraced the National Health System with donations.

You mentioned the need to strengthen the NHS and indeed from the Recovery Fund, as the Secretary General said, around 700 million euros have been secured for our hospitals and health centers. Especially for Health centers and regional clinics, this amount amounts to around 300 million. I want you to think that what is being done here with the private initiative will be implemented in 157 health centers and regional clinics in all our islands, in all regions, so that there is better building infrastructure and equipment.

Beyond these, the issue of staffing is rightly raised, especially in island Greece.

It is a problem that we have highlighted and for this reason there will be specific incentives, but there will also be exploitation of the technology.

It is certain that the Naxos hospital needs reinforcement. This support will be based on the needs, which are formed by the health map. The hospital of Naxos is included in the context of the Recovery Fund and from there onwards interventions will be made in the best possible way to serve the citizens and all the small Cyclades”.

The Minister spoke with the rural doctor of the Regional Clinic and the nurse.

Then the Minister of Health went to Naxos where he visited the Naxos Hospital. There he was welcomed by Deputy Governor Kalitsa Frangiskou and the Prefect of Naxos Ioannis Margaritis.

Facebook
Twitter
Pinterest
WhatsApp
Previous article
The US “opens up” an issue for Venezuela: They accuse Russians of sending military technology
Next article
Kherson is being evacuated: At least 15,000 people have been evacuated