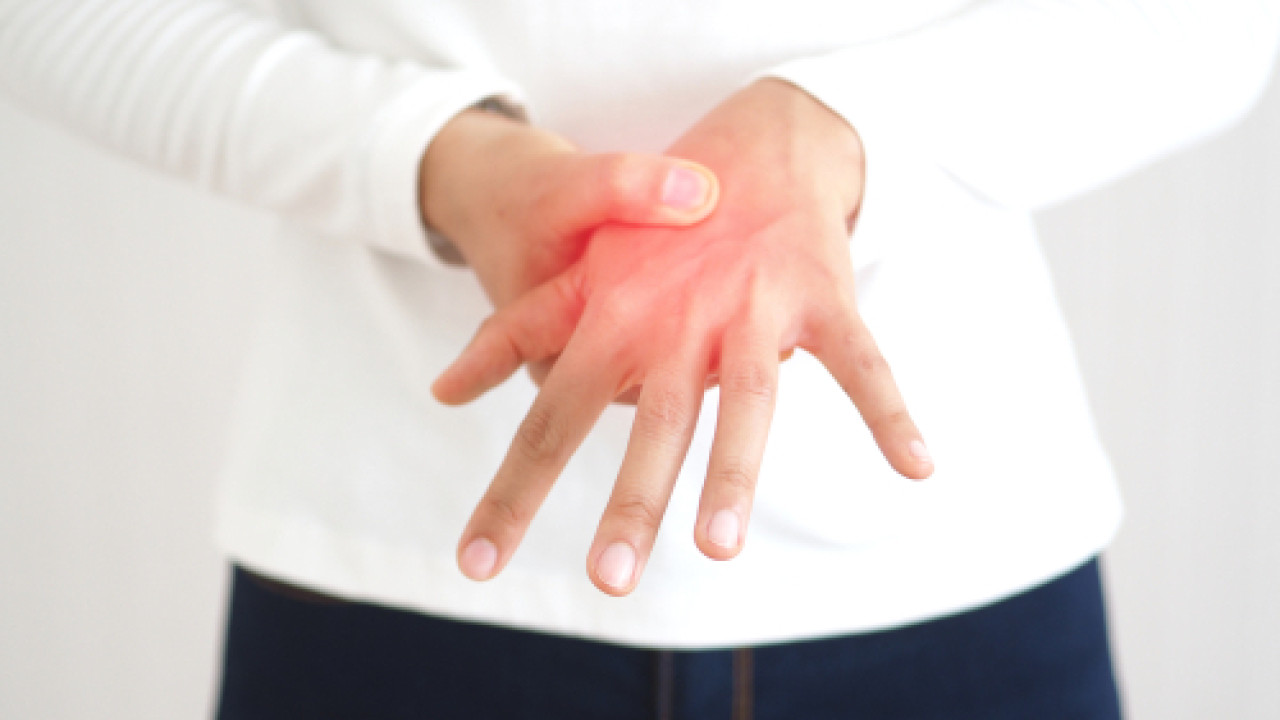 Psoriatic arthritis is a type of inflammatory arthritis, which is combined with the presence of psoriasis in the history of the patient himself or his relative.

It belongs to spondyloarthritis, a group of diseases characterized as “seronegative”, i.e. not accompanied by the presence of immunological markers (autoantibodies) in the blood. Also, a common finding is the involvement of the axial skeleton, i.e. inflammatory changes along the spine and in the sacroiliac joints.

Therapeutic treatment of psoriatic arthritis
Regarding the therapeutic treatment of psoriatic arthritis, the clinical manifestations of the disease should always be taken into account, which may include involvement of the axial skeleton, enthesitis (tendoerythritis, bursitis, etc.), digitalis (painful inflammation of an entire finger that sausage-like) and skin disease including nail involvement. Possible comorbidities, such as lung and heart diseases, history of malignancy, thrombosis, herpes zoster, etc., must also be taken into account. Finally, possible pregnancy planning should be taken into account, because a part of the drugs used must be stopped, either before or when pregnancy is detected.

In the first stage and in the presence of mild symptoms, symptomatic treatment with non-steroidal anti-inflammatory drugs or local cortisone injections may be preferred. In the presence of polyarthritis and negative prognostic factors (increased inflammatory markers, digitalis, presence of radiological changes), conventional immunomodulating agents are initially preferred, most commonly Methotrexate. The dose usually used is between 15-20mg per week in oral or injectable form, while it is also combined with folic acid supplementation one to two days before or after taking the medicine. The effect of the drug can be assessed with confidence after about three months of use. Other alternatives to conventional immunomodulating drugs are Sulfasalazine and Leflunomide.

Apremilast is a phosphodiesterase 4 inhibitor and belongs to the so-called “targeted” synthetic immunomodulatory agents. It may be preferred in patients with milder disease who have failed a conventional immunomodulatory agent but are not considered suitable for use of stronger treatment such as biologic agents or JAK-inhibitors. Apremilast does not, however, appear to inhibit the appearance of radiographic changes associated with the disease.

In case of insufficient response or intolerance to conventional immunomodulatory drugs and the presence of moderately high/high disease activity, biological agents are the next step in the therapeutic approach. These can also be used earlier in the treatment of the disease if there is particularly high inflammatory activity. Their combination with conventional immunomodulating agents, such as Methotrexate, can ensure greater effectiveness, due to synergistic action, as well as better viability of the biological agent.

Tumor necrosis factor (TNF-a) inhibitors are the biological agents with which we have the longest experience. We currently have five different drugs that fall into this category: Etanercept, Adalimumab, Certolizumab pegol, Golimumab and Infliximab.

The first four are given as a subcutaneous injection every week, two weeks or four weeks, depending on the drug, while Infliximab is given as an intravenous infusion initially as a burst and eventually every 6-8 weeks. Etanercept, Adalimumab and Infliximab exist in the form of the original drug, but due to patent expiry more than one ‘biosimilar’ drug has been released for each. Efficacy between different drugs in the TNFa inhibitor class, as well as between originals and biosimilars, is equivalent, according to studies that have been done. The full assessment of the action of a biological agent is made after about 3-6 months of its use, although its action can occur much faster.

If the patient does not respond adequately to the use of the first TNFα inhibitor or shows subsequent loss of activity, then a change to a different biologic agent is recommended. The latter may belong to the same class (TNFα inhibitors), especially if the patient had initially responded to a drug of the same class, or to another type of biological or “targeted” synthetic immunomodulatory agent. Our current alternatives include interleukin (IL) 17A inhibitors (Secukinumab, Ixekizumab), IL 12/23 inhibitors (Ustekinumab), and IL 23 inhibitors (Guselkumab, Risankizumab) from biologic agents, as well as Janus kinase inhibitors (Tofacitinib, Upadacitinib).

The predominant clinical manifestations and more serious causes of morbidity can be criteria for the selection of the appropriate biological agent. More specifically an IL17A inhibitor may be preferred over a second TNFα inhibitor or JAK-inhibitor in case of severe skin disease. IL23 inhibitors also have good activity in skin disease. Ustekinumab may be preferred in the presence of psoriasis and inflammatory bowel disease (Crohn’s disease, ulcerative colitis). JAK inhibitors have the advantage of oral administration.

In the Rheumatology Department of HYGEIA, there is the possibility of monitoring patients with psoriatic arthritis in Outpatient Clinics, in the Day Treatment Unit, as well as as inpatients, if necessary, and the possibility of managing their treatment, according to the scientifically appropriate approach.

Eleni Thomaidi, Rheumatologist, Associate of the Department of Rheumatology HYGEIA