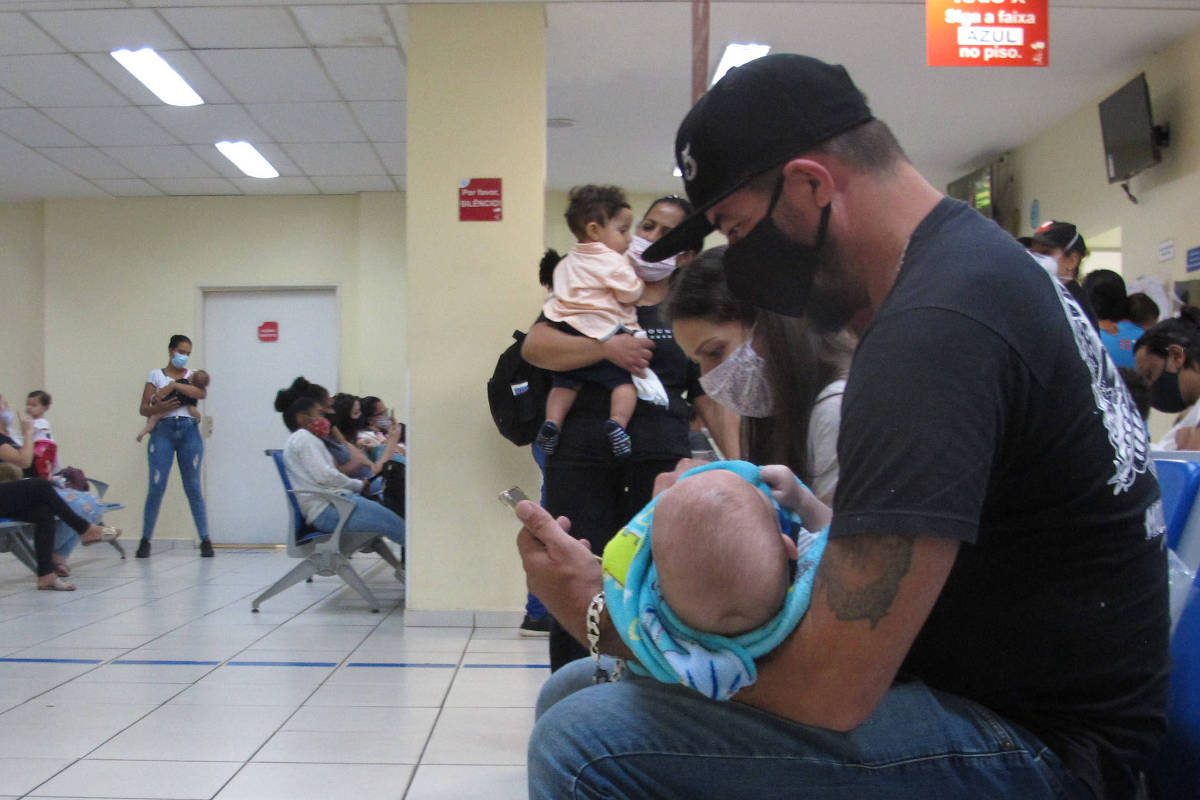 The city of São Paulo had an increase in cases of severe acute respiratory syndrome (SARS) in children, which caused the city’s hospitals to be overcrowded. Currently, 84% of pediatric wards and 86% of ICU beds are occupied.

The growth of cases is considered normal for the autumn, when the circulation of viruses that cause respiratory diseases increases. According to hospitals and doctors, most records are related to RSV (respiratory syncytial virus), not Covid-19.

THE Sheet had already shown that, since the beginning of March, the city’s private hospitals were preparing for the increase in cases and hospitalizations. One of the concerns was that children could be more vulnerable to viruses circulating during this period after being stuck at home for nearly two years due to school closures and restricted movement during the pandemic.

According to the Municipal Health Department, the city had already increased the number of children’s beds precisely because of this expectation of growth in cases. In recent weeks, the number of ICU beds has increased from 96 to 116 and the number of pediatric wards, from 386 to 404.

Data from the folder show that cases and hospitalizations started to rise from March and have remained at a high level since then. The numbers are still lower than those recorded in January, when there was an explosion of Covid-19 cases, driven by the omicron variant, along with an atypical flu wave for the period.

Of the 6,190 SARS cases registered in those aged 0 to 19 years in the last week, 52.6% were in children under 5 years of age. This is the public considered most vulnerable to respiratory viruses, as they had less contact with them. This age group also concentrates 79% of hospitalizations recorded in the period.

The data are from notifications made at all hospitals in the city — which includes municipal, state, federal, philanthropic and private institutions.

“What we are observing is what happened in previous years, before the pandemic, the increase in cases during the fall. Having children under 2 years old as the ones who are hospitalized the most. This is the expected profile”, said doctor Felipe Lora, technical director of the Sabará Children’s Hospital.

According to him, the forecast is that the number of cases and, consequently, hospitalizations, will grow even more in May, but fall again in June and July.

“There is no reason to panic, because, unlike the pandemic, we have a history of these cases and we know that the trend is to cool down until the arrival of winter. In May, it is still high, but in June and July it starts to fall when they arrive. school holidays,” he said.

For him, the difference between the respiratory syndromes registered this year is that the severe cases have not only occurred due to the RSV, which is usually the strongest. According to him, the “nice viruses”, such as rhinovirus, metapneumovirus and enterovirus, have also caused more serious conditions.

Experts say it is still too early to say what the cause of these viruses are causing more severe symptoms, but one of the hypotheses is the low resistance of children after the period of isolation.

“We come from two years in which these viruses had a lower circulation due to isolation. In addition, young children were not able to go to school, which is where they are normally infected and create immunity”, said Renato Kfouri, a specialist doctor. in pediatric infectious diseases.

At Sabará Children’s Hospital, the number of pediatric ICU beds has already been expanded in recent weeks to meet the increased demand. They went from 45 to 54. Beneficência Portuguesa reported having registered “an above normal demand in the last week” for this type of bed and says it is attentive and ready for the need to expand its service capacity.

The São Camilo Hospital network reported that the occupancy rate of the pediatric ward is 93% in the wards and 95% in the ICUs and that it is “constantly optimizing triage flows in the emergency room, in order to reduce waiting time and expand the capacity to care for critically ill patients”.

In a note, the City of São Paulo said that the increase is considered common due to the seasonality of respiratory diseases, with a high in the months of March, April and May. He also said that the municipal network is prepared to serve the population.

The State Department of Health reported that it is monitoring the scenario and that, if necessary, it can activate new beds.

Doctors reinforce that the population can protect themselves from these viruses by following health recommendations, such as keeping children’s hands hygienic, airy environments, keeping them well hydrated and avoiding contact with people who have symptoms.

“I hope that the pandemic has left a good lesson for families, which is not to ignore flu symptoms. Children with symptoms, fever, cough, sore throat, should not go to school. This is a way to prevent any respiratory disease, it is collective care”, said Lora.