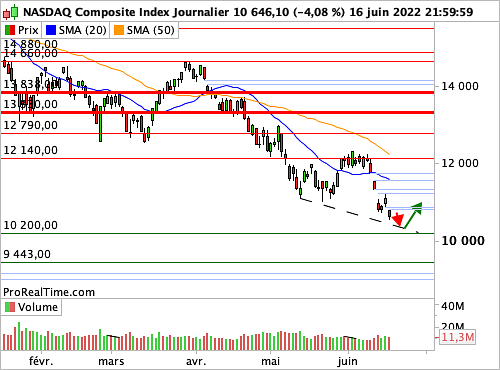 (News Bulletin 247) – Not only were Wednesday’s gains, in the wake of the FOMC, retraced on Thursday’s gap, but they widened on the Nasdaq Composite index during the session, an index which lost 4.08% to 10,646 points. The reflux from the beginning is violent: -32%. And this under the combined effect of problems with the supply of components from China, a rise in government bond yields, an unfailingly aggressive monetary policy against a backdrop of galloping inflation.

In terms of statistics, the week is definitely complicated to say the least. All the major indicators once again came out below their respective targets on Thursday, whether for the manufacturing index Philly Fed (-3.3), new weekly registrations for unemployment benefits (+229K) or sales of housing and building permits. The only relative advantage that investors can see in this bad series of statistics this week is the hope of a less heavy hand from the Fed at the next FOMC. Pigs already have the date of July 28th. To follow at 3:15 p.m. the monthly federal report on industry (production volumes and capacity utilization rate).

Note a value chapter, a downward revision of Adobe’s earnings forecasts, which nevertheless published an increase in EPS and sales for the second quarter.

An open in positive territory is the most likely option this Friday given a lull in the Treasuries 10 years, in the immediate vicinity of 3.20%.

The working matrix remains unchanged, bearish in spite of the moreover timid reaction yesterday with regard to the initial ebb.

The narrow trading range that we identified between 13,330 and 13,838 points was broken under conditions of volumes, volatility, and very significant candles. The marubozu plotted on Thursday 04/21 shows in particular a mobilization of the selling side throughout the session, until a close almost exactly on the low points, opening the way to a bearish target CT at 12,640 points. The latter was broken, after a hesitantly nervous hesitation on the second part of week 17.

The warnings then came on and have not gone out permanently since. The harami envisaged on Monday has not been validated, and the relatively large candle, by its lower shadow, can serve as a framework for the start of a short-term bearish inflection. The reintegration of the lower part of the 20-day moving average (in dark blue), validated, brings a clear bearish message.

Friday’s closing level off the weekly lows, which we put on watch, brings an additional bearish reading. The very clear price / volume divergence has been unappealing since May 25, was followed by a release of selling energy out of the bottom of a micro-diamond, followed by the formation of two large bearish gaps, the last of which was only partially regained on Wednesday 15.

This bearish scenario is valid as long as the Nasdaq Composite index is trading below the resistance at 12140.00 points.