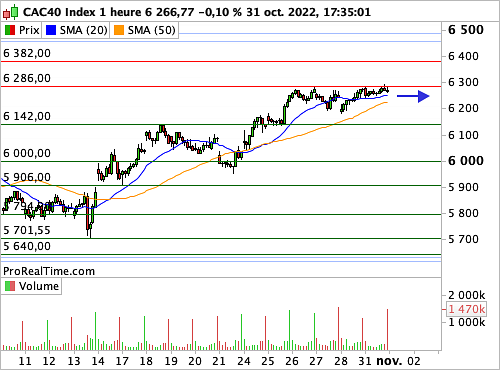 (News Bulletin 247) – First of all, note that despite the holiday nature of this Tuesday (November 1, All Saints), the Paris Bourse will list, under usual timetable conditions. The opportunity to note the absence of systematic correspondence between public holidays and closure in Paris. Conversely, Monday, December 26, which is not a public holiday, will be non-working.

The flagship Parisian index, the CAC 40, ended Monday’s session on a slightly negative note, in reduced activity due to the absence of a significant fringe of operators. The barometer contracted 0.10% to 6,266 points. Operators already have their eyes glued to the outcome tomorrow of a new Fed Monetary Policy Committee. The challenge is to “feel” how close the Fed is to its “neutral” rate.

“The Federal Reserve should once again raise rates “jumbo” (75 basis points) at its meeting ending on November 2”, anticipates, like many analysts, Thomas Costerg, Senior US Economist at Pictet Wealth Management .

“Despite growing political pressures, including open letters from some Democratic senators fearing collateral damage to the economy, the Fed should stay ‘right in its boots’ given the persistence of inflation.”

The Fed will be able to rely on the PCE indices published on Friday. Consumer prices according to this index (Personal Consumption Expenditures Price Index) have indeed increased by 6.2% over one year, where the consensus expected 6.3%. Over October, prices rose 0.5%, within target.

The Fed will naturally take into account, moreover, tensions on employment, while the monthly figures (NFP) are expected for Friday. This day, the survey of the private firm in HR ADP will give a valuable taste.

“The Fed is also looking particularly at employment gains, which are still very resilient (the unemployment rate is at a low of 3.5%), as well as consumer inflation expectations (in particular those of the Michigan survey). The latter remain relatively high at 5% (October figure), and particularly feed fears of inflation which would become entrenched because it is rooted in mentalities”, adds Mr. Costberg.

Across the Atlantic, the Chicago PMI activity index fell to 45.2, the lowest since June 2020.

On the values ​​side, Orpea and Korian have soared by 24% and 10% respectively after plunging on Friday, by 20.4% and 17% respectively. The announcement last week of a heavy financial restructuring project by Orpea cast a new chill on a sector already in difficulty on the stock market. On the other side of the Parisian chessboard, Air France-KLM fell 3% and continued to suffer releases, after having already fallen 13.05% on Friday. Capgemini lost 3.4% and Sodexo for its part returned 2.10% while Safran lost a little altitude (-0.9%) penalized by a deterioration of Citi which went from “neutral” to ” purchase” on the value.

Note that the American East Coast will switch to winter time overnight from Saturday to next Sunday. In the meantime, Wall Street will open at 2:30 p.m. (Paris time) and not 3:30 p.m., therefore.

A point on the other risky asset classes: around 08:00 this morning on the foreign exchange market, the single currency was trading at a level close to $0.9920. The barrel of WTI, one of the barometers of risk appetite in the financial markets, was trading around $87.10.

To be followed as a priority on the statistical agenda this Tuesday, the ISM manufacturing PMI and the new JOLTS job offers, across the Atlantic at 3:00 p.m.

Facebook
Twitter
Pinterest
WhatsApp
Previous article
Metaxas: “I was ashamed of the world of PAS, every fan would do the same as me”
Next article
Noel Gallagher sings us ‘Pretty Boy’ – Listen to his new song