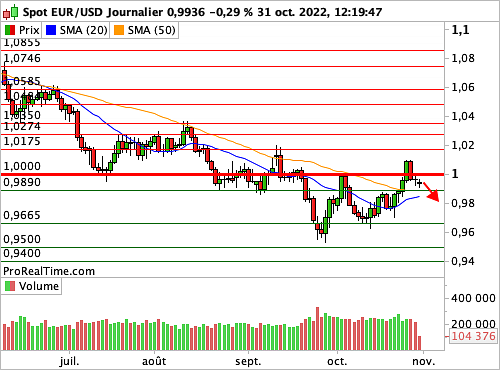 (News Bulletin 247) – One Dollar per Euro: this zone of perfect parity continued to constitute a kind of pivot zone, around which traders meet before major monetary meetings. After the ECB last week, the Fed is bringing together its “wise men” this week. Verdict on rates on Wednesday, with a monetary policy decision, and of course comments to refine the “neutral” rate estimates.

In any case, the equity markets clearly suggest that the hope of a slowdown in the pace of monetary tightening is growing. “A harbinger of the long-awaited “dovish pivot” of the Fed?” asks Thomas Giudici, co-head of bond management at Auris Gestion. “FOMC members seem, in any case, still torn, with the more dovish advocating for a pause to observe the consequences of tighter financial conditions. core should continue to be vigorous in the coming months due to strong inertia on certain components (rents in particular), will the Fed take the gamble of releasing the pressure too soon after making a mistake in 2021?

As a reminder on the ECB side, last week, the Board of Governors did not give birth to any surprises, and will have prepared minds for the last meeting of this trying year, in December. Key rates rose by 75 basis points to now stand at 2.00%. “Certainly, the president of the ECB, Christine Lagarde, avoided talking about the neutral interest rate during the press conference”, notes Ulrike Kastens, economist Europe, DWS.

“However, in view of the high inflation rates, it did not rule out the possibility that the central bank would have to raise the policy rate beyond a neutral interest rate level in order to reach the target again. ECB inflation target. On the other hand, no statement has been made on the level of the next interest rate step in December 2022. This will largely depend on the extent of the economic slowdown. However, it is likely that ‘it is at least 50 basis points.

In terms of statistics on Friday, traders also took note of the PCE index, the Federal Reserve’s favorite barometer for measuring inflation. Consumer prices according to this index have indeed increased by 6.2% over one year, where the consensus was expecting 6.3%. Investors see it as a sign that the peak of inflation has passed, reinforcing the scenario of a less aggressive approach by the US Federal Reserve. This statistic will likely fuel the Fed’s debates.

At midday on the foreign exchange market, the Euro was trading against $0.9940 about.

In significant volatility, the currency pair has successively drawn two marubozus in daily data, of equal magnitude, and of comparable level, around the perfect parity, which continues to constitute a pivot level in the immediate future.

In view of the key graphic factors that we have mentioned, our opinion is negative in the medium term on the Euro Dollar (EURUSD) parity.

Our entry point is at 0.9934 USD. The price target of our bearish scenario is at 0.9666 USD. To preserve the invested capital, we advise you to position a protective stop at 1.0001 USD.

The expected return of this Forex strategy is 268 pips and the risk of loss is 67 pips.