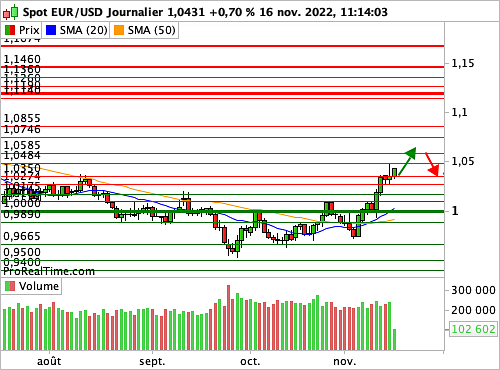 (News Bulletin 247) – The Dollar continued to retreat against the Euro, since the publication on Thursday of the first signs of flattening of the price rise curve, suggesting, not the end of the tunnel, but the hope of a softening of the Fed’s tone during the next monetary maturities. It should be noted that this “decline in inflation is above all linked to the health sector”, warns Vincent BOY (IG France) in particular, which means that the change in methodology in the calculation of health costs has a noticeable impact on CPIs. Moreover, as noted by Jeanne Asseraf-Bitton, head of research and strategy at BFT Investment Managers, “the prices of non-energy services remain firm due to the “housing” component, which is still accelerating.” As a reminder, in October, at an annualized rate and corrected for seasonal variations, prices excluding food and energy increased by 6.3%.

The Euro for its part, as a barometer of risk appetite, remains supported in the immediate future by the hope of a gradual relaxation of the drastic anti-Covid measures in China, and by the publication yesterday morning of a jump in the ZEW index of confidence in the German economy, from -59.2 to -36.7. “The ZEW indicator of the economic sentiment in the first economic power of the Euro Zone increases again in November. This is probably linked above all to the hope that inflation rates will soon fall. In this case, policymakers do not would not have to curb monetary policy so harshly. However, the economic outlook for the German economy is still clearly negative,” comments ZEW Chairman Professor Achim Wambach.

The producer price index increased “only” by 0.2% on a monthly basis (stable excluding food and energy) in October, while the consensus foretold a more pronounced rise in prices.

Moreover, the manufacturing index of the New York Fed (Empire State index) returned to positive territory, at 4.5 points, largely beating the target. “New orders were down slightly, while shipments were up slightly. […] Regarding the labor market, indicators point to a solid increase in employment and an increase in the number of hours worked. Input prices rose at about the same pace as last month, as the rise in selling prices accelerated. In contrast, companies expect business conditions to worsen over the next six months.”

The advance of risk assets in general remains conditioned, however, on the diplomatic situation between NATO and Moscow since the fall in Polish territory of a Russian-made missile.

To follow the federal monthly employment report at 3:15 p.m.

At midday on the foreign exchange market, the Euro was trading against around $1.0425.

The single currency returned to levels not seen since August, and for the first time since September 21, and managed to amplify its excursion beyond the level of perfect parity. The crossing of two remarkable moving averages (20 days out of 50 days) is validated. The next test is in progress, it is that of a resistance level around $1.0350. Beyond that, a broader revival of the Euro could be envisaged.

In view of the key graphic factors that we have mentioned, our opinion is positive in the medium term on the Euro Dollar (EURUSD) parity.

Our entry point is at 1.0432 USD. The price target of our bullish scenario is at 1.0745 USD. To preserve the invested capital, we advise you to position a protective stop at 1.0269 USD.

The expected return of this Forex strategy is 313 pips and the risk of loss is 163 pips.