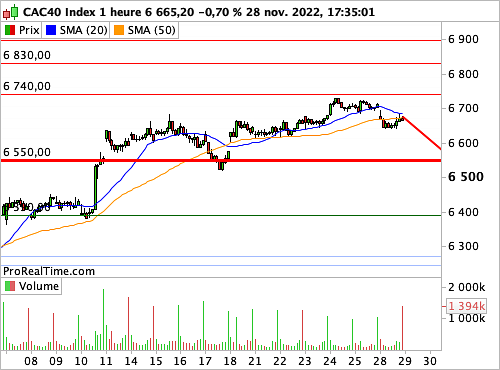 (News Bulletin 247) – Let’s be clear: the market, on both sides of the Atlantic, is not shaken by the health situation in China – the vast majority of Covid-19 cases there being asymptomatic. But it is the explosive atmosphere, the result of a radical anti-Covid policy, which worries, while clashes between exasperated civilians and police are increasing in large urban centers.

Restrictions are increasing. Beijing has closed parks and museums, Shanghai is banning newcomers to the city from going to restaurants, markets or malls for the next five days. Extremely rare, a wave of protests developed this weekend in major cities, with demonstrators expressing their dissatisfaction with the measures. According to AFP, this mobilization seems to be the largest since the pro-democracy riots of 1989, marked by the repression in Tiananmen Square.

“The situation is becoming more tense in China with demonstrations in several cities against the “zero-covid” strategy, the largest since Tian’anmem”, abounds Thomas Giudici, co-head of bond management at AURIS Gestion. “While the Chinese government had recently been rather quick to relax the drastic rules imposed in the country, the surge in covid cases puts it in a delicate situation: to relax the restrictive measures at the worst moment, while the coverage vaccination in the country is low, or risk a revolt with an uncertain outcome.”

Few macroeconomic benchmarks to eat on Monday, as Wall Street returned after the long Thanksgiving weekend – Thursday’s session was shortened, in starving volumes, without any teaching. The calendar is expanding from this Tuesday (see below).

On the value side, crude prices, under pressure with the situation in China, weighed down the prices of (para) oil companies, like TotalEnergies (-1.20% to 57.74 euros) or Vallourec (-1, 52% to 10.36 euros). The biggest drop of the day in the CAC 40, we find Airbus (-5.7%) while Reuters reported Friday evening that the group would prepare to postpone deliveries of medium-haul aircraft scheduled for 2023.

On the other side of the Atlantic, the main equity indices ended the first session of the week in the red, with the rather offensive tone of four members of the Fed. The Dow Jones lost 1.45% to 33,848 points and the Nasdaq Composite 1.58% to 11,049 points. The S&P 500, the benchmark barometer of risk appetite in the eyes of fund managers, fell 1.54% to 3,963 points.

A point on the other risky asset classes: around 08:00 this morning on the foreign exchange market, the single currency was trading at a level close to $1.0370. The barrel of WTI, one of the barometers of risk appetite in the financial markets, was trading around $75.20.

To follow as a priority on the statistical agenda this Tuesday, across the Atlantic, the S&P CS index of property prices at 3:00 p.m. and especially the consumer confidence index (Conference Board) at 4:00 p.m.

The rally that began on 10/04 resulted in a sharp return to a resistance zone at 6,550 points. The ability to overcome this in high volumes would pave the way for a continuation of this October rally. It is precisely this level that is being redefined, with congestion around 6,600 points. In the immediate future, the inability to create new high points augurs at least a breather. A short corrective phase towards the 20-day moving average (in dark blue) can also take shape at any time, especially as a price/volume divergence sets in. It is now the look of a potential chartist figure that we will have to identify as soon as possible.

This bearish scenario is valid as long as the CAC 40 index is trading below the resistance at 6740.00 points.

Market: Europe ends in the red with the return of rate uncertainties

Cac 40: Tensions between China and the United States halt the rise of the CAC 40