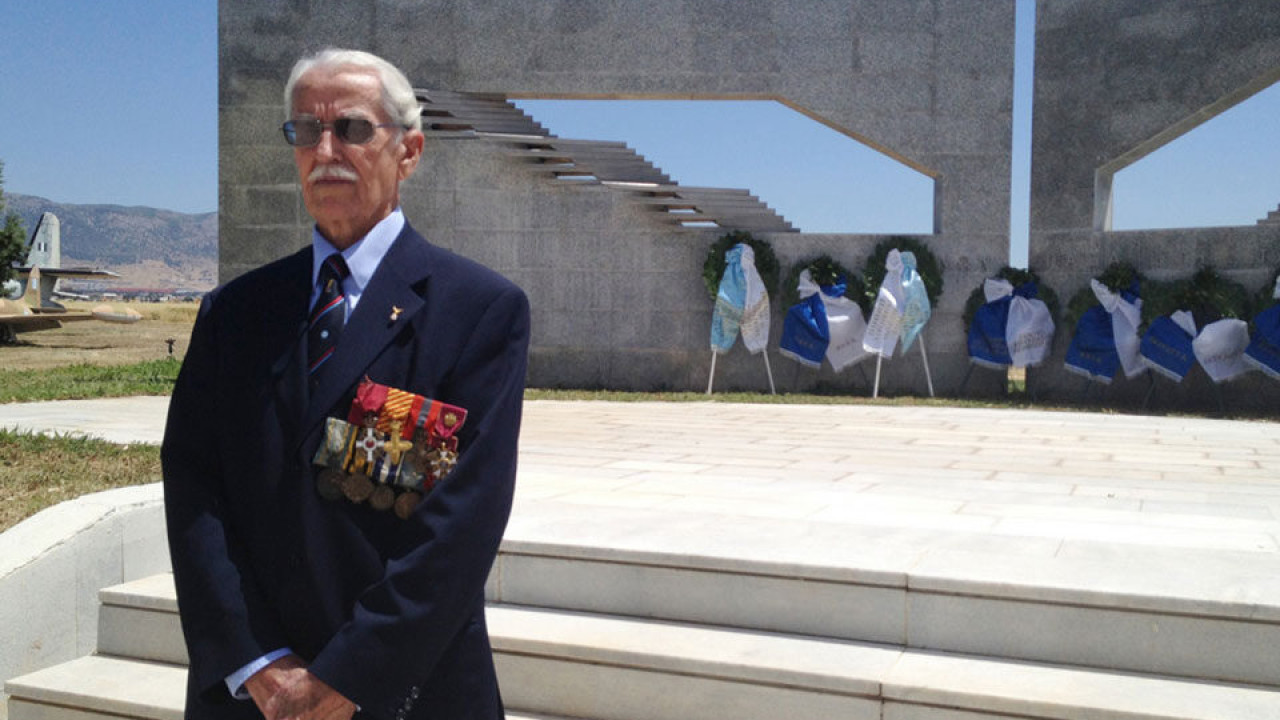 K. Hatzilakos had to his credit over 200 combat missions with “Hurricane” and “Spitfire” aircraft. For this action he was awarded 10 war medals

The legendary pilot of the Second World War, Lieutenant General (I) e.a., passed away at the age of 102 Konstantinos Hatzilakos. It was announced by the Union of Retired Air Force Officers, while the sad news was communicated through social media by his nephew, Giorgos Karavanas, Molecular Biologist and Deputy Commander at Lamia Hospital.

From war to peace

The vice-captain (I) e.a. Konstantinos Hatzilakos was born in Larissa in 1920. He enrolled at the Ikaron School in 1940. During the Second World War (1940-1945) as a fighter pilot of the Hellenic Royal Air Force, he operated on the battlefields of North Africa, the Mediterranean, Italy, of Yugoslavia and the Aegean. he had to his credit over 200 combat missions with “Hurricane” and “Spitfire” aircraft. For his action this was awarded to him 10 war decorations.

In the period 1945-1967 he was an instructor in military schools of all three arms of the armed forces, as well as commander of large air units and director of operations in NATO headquarters. In 1964-1967 he was a defense attaché at the Greek embassy in Washington. Demobilized in April 1967, loyal to the Constitution, due to of his opposition to the junta of colonels.

He then worked for nine years as a manager at Haliburgiki and from 1978-1997 was a technical consultant for Mc Donnell Douglas Corporation. He was the inventor of “TRITON”, the Greek Wave Energy to Electricity Converter. As a veteran fighter pilot, he served as president of the British Royal Air Force veterans’ association, Athens branch.

“Our beloved “uncle Kostas”, my grandmother’s brother, who was a living legend of the 2nd World War, passed away today (yesterday). At the age of 102 and having lived a life that could have been the subject of a movie, Vice Admiral (I) Konstantinos Hatzilakos left the Prince of Wales Charles, who was visiting Greece at the time, speechless when he showed him records of more than 200 air combat missions under the then command of the RAF, in his plane’s LogBook.

But uncle Kostas, in addition to being a war hero, was also a genuine pacifist, who did not like to recount war stories at all. Instead he preferred to deal with other subjects, happier and less dark. A gentle and deeply cultured man, who loved life. Animal lover, art lover and music lover, a rare – perhaps even unique – kind of Pterarch who, in addition to flying and training, also composed music!

A brilliant example of a man who fought for peace with deeds and not words! A friend of peace not out of fear or hesitation but out of conviction. Gunpowder-smoked pacifist, with critical thinking and political insight. He was discharged early when he refused to join the army during the period of the Colonels.

His life was treated generously, since there were not a few times when he escaped the teeth of grace. Of the Greek pilots of the first series who entered the war, none returned. From the second series, of which he was a member, half returned. An anti-aircraft missile that struck his plane, as examination of the fuselage entry and exit points later showed, passed between his legs, then in front of his nose, and then exited the cockpit canopy uninjured. touch it! Life allowed him to see three children and a beautiful grandchild. He made us all proud. May his memory live forever!”.

The interview of the legendary Vice Admiral, three years ago in APE BEE:

The vice-captain e.a. Konstantinos Hatzilakos, a fighter pilot in WWII, at the age of 99 in 2019, had unraveled the thread of his fictional life.

– Mr. Hatjilakos, you are an emblematic figure of the Hellenic Air Force. In the Second World War, as a fighter pilot with “Hurricane” and “Spitfire” aircraft, you flew over two hundred combat missions on the fronts of North Africa, the Mediterranean, Italy, Yugoslavia and the Aegean. Tell us how it all started.

-For us young Icarians, everything started with Greece’s “NO” and continued with the fulfillment of an oath and a debt. A journey full of stress, pain and blood. “With it or on it”. So it happened.

– With the collapse of the front in April 1941, and the entry of the Germans into Greece, from Argos where the Icaron School had stationed – through the defended Crete – you found yourself with the remaining 39 Icarons in Egypt, and then in Rhodesia ( now Zimbabwe) and Sudan. There you completed your training as a fighter pilot, before joining the Greek fighter squadrons of the Middle East, under the auspices of the British Royal Air Force. Give us a picture of that period, just before you went into active combat as a fighter pilot, in the furnace of World War II.

-We entered the Icaron School in the summer of 1940, so we knew what awaited us. Our route from Tatoi, to Argos, to Crete, to Palestine to Egypt, to Rhodesia and the Sudan, where we finished our military training, was nothing but the route to fulfill our goal which was to be on the battlefield as soon as possible. Good luck and let’s jump into the fight.

-In February 1943, you were assigned to the newly established 336th Fighter Squadron, equipped with “Hurricane” aircraft. For the next time, a backstage in the middle of the merciless Libyan desert will become your home. You set out from makeshift airfields on the coast of North Africa and from there across the Mediterranean to protect mainly Allied convoys, but also in operations in occupied Crete. Tell us Mr. Flight Chief what you remember from these missions.

– We take off four and return two, or one, or sometimes, none. That’s what I remember.

“Hurricane” is like the horse pulling the plough. Strong, durable, persistent, stubborn. The ‘Spitfire’ is like a racing thoroughbred, light, fast, agile and above all, beautiful.

– Is it true that in November 1943 you were one of four Hurricanes, which were urgently raised to provide air cover for a cruiser sailing at high speed into Alexandria harbor, carrying the British Prime Minister Winston Churchill, and two days later you again accompanied an American bomber “Liberator”, which carried the American president Franklin Roosevelt to Tehran?

-Indeed, on November 22 and 26, 1943, four Hurricanes of the 336 took off on two secret missions. One was to provide cover for a cruiser and the other to escort a bomber “Liberator” with American features. Later, when the secrecy ended, we learned what their precious cargo was. I happened to take part in both missions.

-From the end of 1943, the two Greek Pursuit Squadrons in North Africa were equipped with “Spitfire” aircraft. How different was this plane compared to the Hurricane you were flying before?

– ‘Hurricane’ is like the horse pulling the plough. Strong, durable, persistent, stubborn. The ‘Spitfire’ is like a racing thoroughbred, light, fast, agile and above all, beautiful.

-In the autumn of 1944, the Greek wings leave North Africa and settle in bases in Italy. It is the period when German troops are hastily leaving the Balkans, as the war has moved into the heart of their own country. Tell us, Mr. Hadjilakos, about the missions in which you took part, operating from Italian airfields, and how you felt when you were informed that on October 12, 1944, Athens was free again.

– The 12th of October 1944 was a day of joy for the Athenians, but I remember it as the day when my colleague Epamenontas Kottas was killed, in a mission to Yugoslavia, while the Prime Minister of Greece was raising the Greek flag on the Acropolis. You see the war in Europe continued after October 12th. After the missions we did in the Aegean, until the last German garrisons surrendered, where 6 more of my colleagues were killed, I and Lefteris Karamalegos returned to Italy where the fighting continued fiercely and we joined an English Pursuit Squadron, until the end of of war in Europe, on May 8, 1945. So on October 12, we rejoiced for the liberation of Athens, but we did not stop fighting.

– When did you return to the now free Greece and how many of the original 40 Icarus of the 10th series had survived?

-Which of all your comrades-in-arms do you remember most often today? Do you know if any other aviators from the Greek Middle East squadrons are alive today?

-You don’t forget anyone. And especially the one with whom you shared your tent and the night after returning from a mission, you found his ranch empty. Only one of my classmates is alive today, Stathis Athanasopoulos.

-Which fighter jet would you like to fly today, if we could turn back time and you were 23 years old?

-The “Spitfire”, because it is connected to the most intense moments of my life, as an aviator.

-What do you have to say to today’s Greek air force pilots, who defend the Aegean every day?

– To have duty and honor in their hearts and to do what it dictates.

– Mr. Hatjilakos, you have more than fulfilled your debt to the homeland, in the most adverse conditions. What is our debt today?

– Let’s not forget, honor and be vigilant.

Facebook
Twitter
Pinterest
WhatsApp
Previous article
Thriller about the life of an elderly man on a flight from Thessaloniki to Heraklion – The relatives are taking legal action
Next article
CAC 40: The markets, tense, are witnessing a rise in anger in China