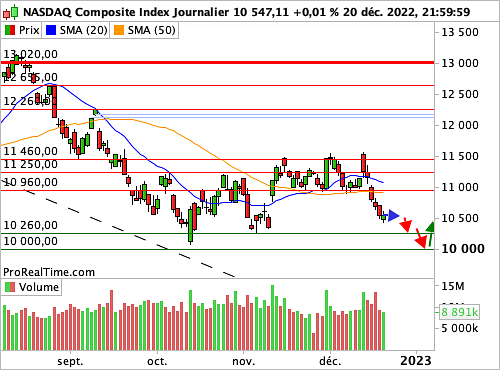 (News Bulletin 247) – Hesitating yesterday, after 4 sessions of pronounced decline, the Nasdaq Composite ended in equilibrium, close to 10,550 points, in declining volumes, after major monetary maturities, and with the approach of publications sharp statistics.

As a reminder last week, J Powell took the markets on the wrong foot by adopting a belligerent tone in a post-FOMC press conference. “I wouldn’t see us considering rate cuts until the committee is confident that inflation is down to 2% sustainably,” he said.

“Fed watchers appear to have moved away from concerns about the pace of rate hikes and the final level of rates, to instead wondering how long interest rates will remain at restrictive levels,” the team said. strategy of Muzinich & Co.

But the macroeconomic signals, particularly on the front of tensions on the labor market, still weigh heavily.

On the other hand, anything that can ward off the impending or recession can momentarily give air to the index. It is in this context that the trading rooms will follow with the greatest attention the publication of the consumer confidence index (Conference Board), at 4:00 p.m. (Paris time).

“Until now, any bad statistics were welcomed by investors and were positive for the financial markets, because they made it possible to anticipate a more lenient Fed”, for Vincent Boy (IG France). “From now on, it is very likely that the bad economic data will be negative for the evolution of the global indices, due to fears of a recession in 2023.” However, the latest activity barometers (PMI in preliminary data for December) were seriously disappointing, completely missing their target.

The flag (November 11 / December 14) is now broken, under volume conditions that make sense. The remainder of the November 10 gap is now fully filled, without isolation of sessions; the index has two short-term “falling points” (10,260, then the symbolic threshold of 10,000 points), before considering a technical protest reaction. Price navigation is going to be very technical until the end of the year.

CAC 40: On the defensive before two major monetary deadlines