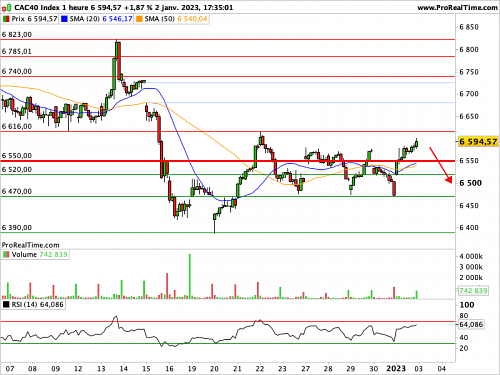 (News Bulletin 247) – In the absence of benchmarks from Wall Street for the first session of the year, the Parisian market took on some color, thanks to cheap buybacks on a certain number of badly handled files in 2022, like Valeo (+6.74% to 17.825 euros), Faurecia (+8.49% to 15.33 euros) or Orpea (+10.27% to 6.806 euros). Files with a strong Beta effect, which therefore tend to amplify variations in their benchmark indices. Special palm for Atos, which jumped more than 20%, while Airbus is considering taking a minority stake in Evidian, the cybersecurity and digital branch of Atos.

In terms of statistics, there are no surprises on the final data of the barometer indicators of activity in industry in the main economic poles of the Euro Zone. For the monetary union as a whole, the score for December stands at 47.8, in line with initial estimates.

Chris Williamson, Chief Business Economist at S&P Global Market Intelligence, provided the following insights: “Looking ahead to the year ahead, in addition to monitoring potential shifts in fiscal and monetary policy, high on the list of issues manufacturers need to to watch as we approach 2023, is the impact on supply chains and commodity prices of health policy in China, as well as the possibility of sharp swings in energy prices linked to the evolution the geopolitical situation, with the war in Ukraine, which remains the main threat to stability in the region.”

Wall Street will reopen on Tuesday, after a long weekend, Monday January 2 having been closed for the New Year, the 1st falling this year on a Sunday. Find here all the holidays on Wall Street for 2023.

A point on the other risky asset classes: around 08:00 this morning on the foreign exchange market, the single currency was trading at a level close to $1.0650. The barrel of WTI, one of the barometers of risk appetite in the financial markets, was trading around $80.40.

To be followed as a priority on the macroeconomic agenda this Tuesday, the US manufacturing PMI in final data for December at 3:45 p.m., and still across the Atlantic, construction spending at 4:00 p.m.

Immediately, the pullback Wednesday 21/12 out of the 6,550 points must be reversed or definitively confirmed to send any usable signal. It has so far been confirmed twice. It is this pivot level (6,550) that will be the arbiter of this very first part of the year.

As for trend indicators, the relative trajectories of two remarkable moving averages send out a warning signal.

This bearish scenario is valid as long as the CAC 40 index is trading below the resistance at 6550.00 points.

Facebook
Twitter
Pinterest
WhatsApp
Previous article
Sadness over the death of 16-year-old boxer Vassilis Topalos – Avgenakis: Many questions, but they will be answered
Next article
Tonight the first shower of “shooting stars” of 2023