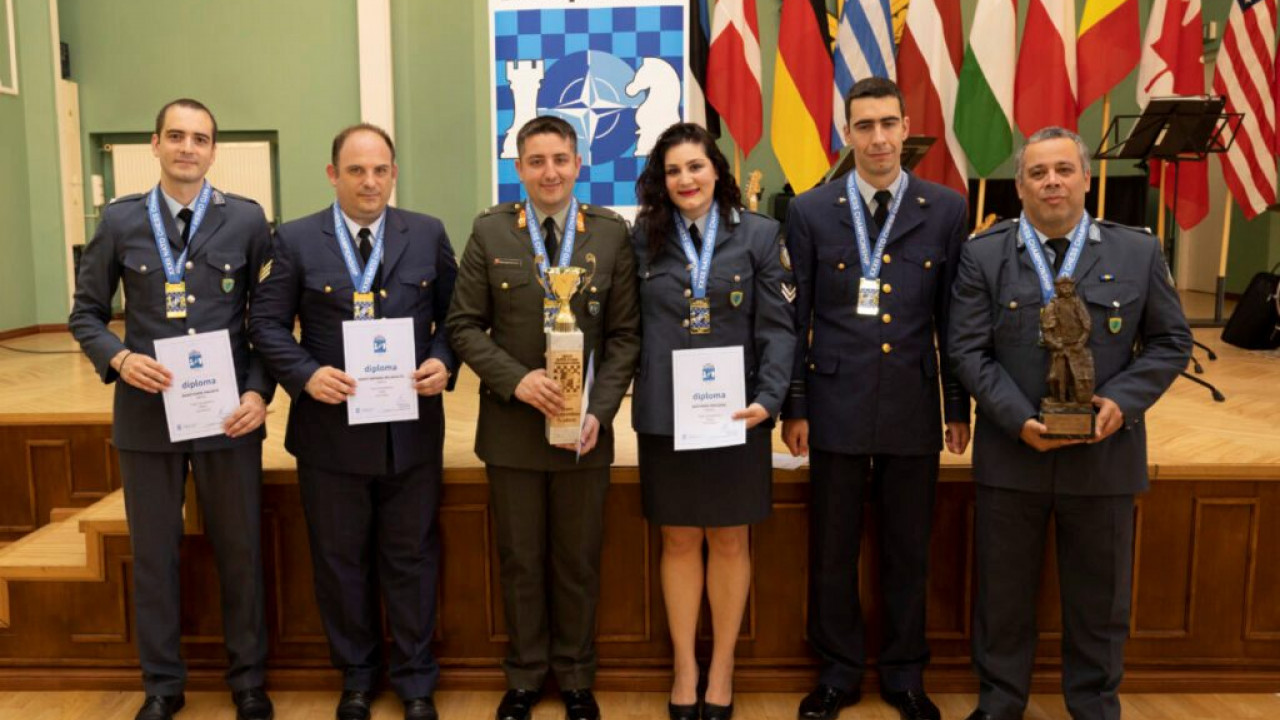 The Greek team managed to win all of its first places, both at individual and team level.

The games were hosted at the Military Academy in the city of Tartu, of Estoniafrom June 27 to July 1 and the Greek team managed to conquer all her first positionsboth at individual and group level.

The championship was held with the participation of 15 NATO member states and 94 sportsmen and women, with a Swiss system of 7 rounds and a thinking time of 90 minutes for the whole lot, with an increment of 30” for each move from the first move.

The two double rounds in five days, in combination with the strong compositions of the traditional powers of the championship (Poland, USA, Germany, etc.), they gave very ambiguous and impressive games.

The National Team of the Armed Forces that took part in the games consisted of:

The Greek team managed, in its fifth participation in the NATO championship, to score the highest possible distinction at the team and individual level and at the same time to achieve another distinction in Blitz, in an event that is traditionally a parallel event of the championship, confirming the high chess level that the country also has in uniform.

-In the team standings of the championship, our country took 1st place with 23 points, staying away from all its rivals, last year’s champion team of Poland (2nd place with 19.5 points) and the strong team of the USA . (3rd place with 19.0 points),

– The candidate master (CM) second lieutenant (O) Alexandros Papasimakopoulos was named NATO champion, as he was the winner of the championship, with 6.5 points in 7 matches. The 2nd place was won by the international master (IM) sub-constable Anastasios Pavlidis, with 6 points. The women’s international matric (WIM) and member of the national women’s team vice-captain Aikaterini Pavlidou with 5.5 points was ranked 5th, in a tie for positions 3-5, while the team captain (O) Andreas Nikomanis finally completed the tournament with 5 points and took the 9th place, as it tied for places 6-12.

-The game of the 5th round of the Greek chess player (IM) constable B. Anastasios Pavlidis with his American opponent Eigen Wang (2293), was awarded as the best game of the championship. It is noteworthy that the second lieutenant (O) Alexandros Papasimakopoulos with the performance he had in the tournament passed 2300 elo units and is now a new Greek FIDE MASTER (FM).

The third major success came in the 11-round blitz tournament, which was held as a side event of the championship immediately after the games were over, with 3′ + 2″ thinking time for the whole game for each player. The Greek chess player (CM ) second lieutenant (O) Alexandros Papasimakopoulos finished the match with an impressive 9.5 in 11 games and took 1st place in this tournament as well, while (WIM) deputy warden Aikaterini Pavlidou with 8 points took 3rd place, thus completing the absolute dominance of the Greeks in the games, is emphasized in the relevant announcement of the Supreme Sports Council of the Armed Forces.