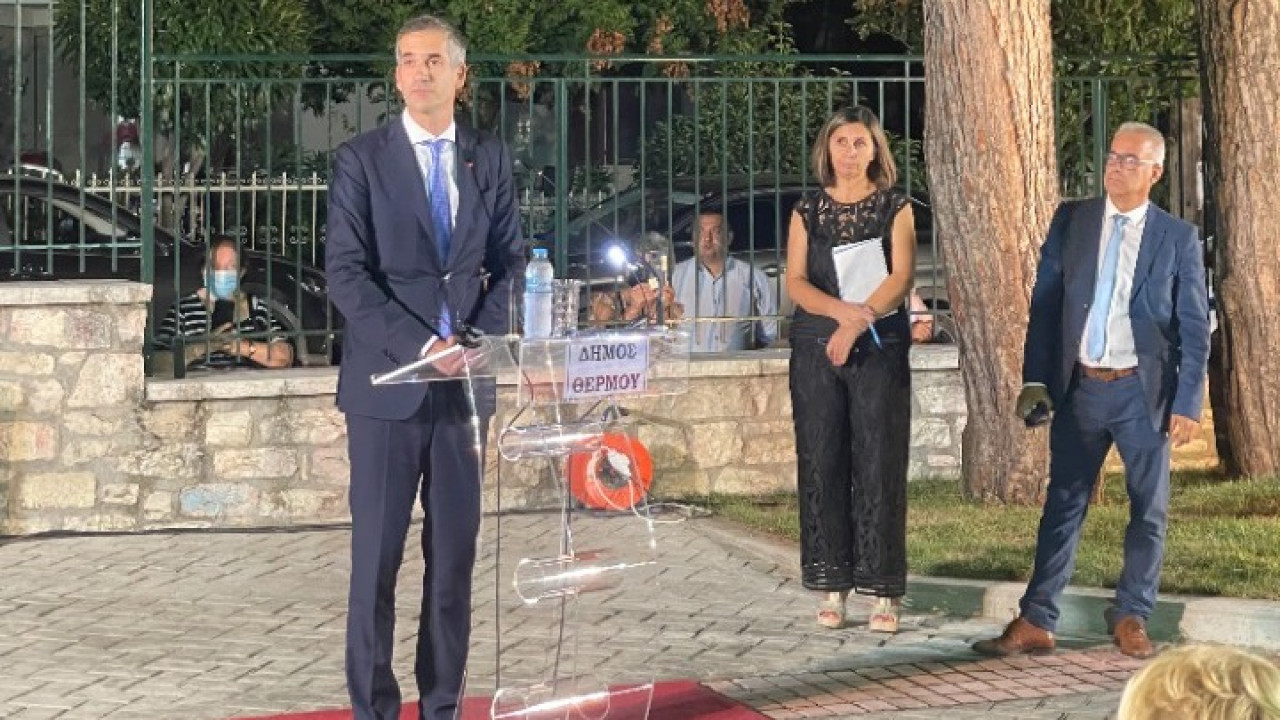 Prefacing the event, the mayor of Thermo, Spyros Konstandaras, described the event as a “debt to Pavlos Bakoyannis” and made special reference to the Greek-American Petros Gromitsaris, who covered the cost of the bust, and also to the sculptor Evangelos Tympas, who created it, and reminded that the late politician spent his high school years in Thermos.

The mayor of Athens, Kostas Bakoyannis, was the keynote speaker at the unveiling event of the bust of his father, the late Evrytana politician Pavlos Bakoyannis, in the courtyard of the Gymnasium in Thermo Etoloakarnania, where he had spent his student years.

Prefacing the event, the mayor of Thermo, Spyros Konstandaras, described the event as a “debt to Pavlos Bakoyannis” and made special reference to the Greek-American Petros Gromitsaris, who covered the cost of the bust, and also to the sculptor Evangelos Tympas, who created it, and reminded that the late politician spent his high school years in Thermos.

The mayor of Athens was deeply moved, at the beginning of his speech he noted that “a mayor who respects himself should never lose his words. But you will forgive my emotion, because the truth is that I find it difficult to talk about my father even in private, let alone in public – and that is why I have never done it for 33 years now” as he characteristically pointed out, to add that ” coming I was thinking what he would say, I don’t dare to say that he might even see us, but if he was here now like this in some corner what would he say to us? It is a wonderful work of art, but he was certainly a man with flesh, with bones, with blood, with warmth. With that half smile. He didn’t like honors, grandeur, not at all. He did not want it to become a square, nor a road, nor a statue. Don’t tell you that somewhere inside he might have seen them from a distance – but even if he didn’t admit it, I’m sure that tonight he would be very, very happy about it, because he loved Thermos”.

Kostas Bakoyiannis also brought childhood memories to the fore, since as he said “Thermo, in our house when we were growing up, had mythical dimensions. Bigger than Agrinio. City. That’s how my father used to talk about Thermo and I remember him laughing and beaming all over. Because here he had found safety, because it was a difficult time, a painful time, a bloody time, and here a community of people opened their arms to him – and opened it at a time in a boy’s life, in adolescence, the time when you form the character, you make the decisions that may lead your life for many years, it is the period when you make the big choices and he made many of them here, because he always had a bond with his place, our place”.

Describing the characteristics of his father, Kostas Bakoyiannis identified his persistence “…to look forward, to make a leap bigger than wear and tear, to overcome, to flee forward. He would tell us, ‘forget what happened 33 years ago, 33 months ago, 33 weeks ago, 33 days ago’. Deep down he believed in progress and knew that the difference, as he said, between progress and maintenance, is always proven in practice…”. In fact, he noted the way in which he addressed the young people, “telling them to keep their minds open to the future” and even that “in this future we will all have to walk together”. He specifically referred to two cousins ​​of his grandfather, “one of whom was tortured, murdered here, just outside of Agrinio, and the other was tortured, murdered in Chelidona on our mountains. One from the left and the other from the right. A lot of blood, a lot of blood my friends, flowed in our mountains, that’s why he set a goal in his life to achieve national reconciliation”.

“Just because we disagree, doesn’t mean we can’t coexist. We are rivals, it does not mean that we are enemies”, stressed the mayor of Athens. “Political confrontation is necessary and purposeful, but we must transcend ourselves, transcend parties, factions, ideologies, and find those that bring us closer. It is not easy in politics to build, it is easier to tear down…” he added.

The mayor of Athens also indicated the relationship between politics and citizen to say that “many times it is paralleled with an open wound. It’s a difficult relationship. If one reads the sites, the newspapers, cynicism, mistrust, suspicion, toxicity, a toxic cloud covers us and we are all looking for heroes, we all want to turn to our children and tell them that ‘look: a hero is not only the one who wears a red cape and flies to the works. A hero is not just the one you see on TV. There are also heroes among us…” he said, making a more general reference to the children of the countryside “who despite the difficulties experienced by their families, despite the economic crises, despite the pandemic, still dream. These children who are still fighting, fighting each one towards their own goal, these children friends are the heroes of tomorrow, it is the children from Thermo who are the heroes of tomorrow, like a child from Velota who he was yesterday’s hero…”

The American ambassador, George Tsounis, in his brief greeting, made a special reference to the personality of Pavlos Bakoyannis, but much more to Kostas Bakoyannis and praised the practical spirit and love of the latter, for his roots and his place. “I have met all the state officials, but Kostas makes sure to think practically, what we can do for the development of a place. He has not forgotten his roots, he loves the area. He has taught me many things of the heart. I can’t wait to see how high it goes.”

Facebook
Twitter
Pinterest
WhatsApp
Previous article
Washington condemns the murder of Daria Dugina
Next article
Vaivém: Despite uncertainties with inputs, soybean producer plants more and will have record area in 2022/23