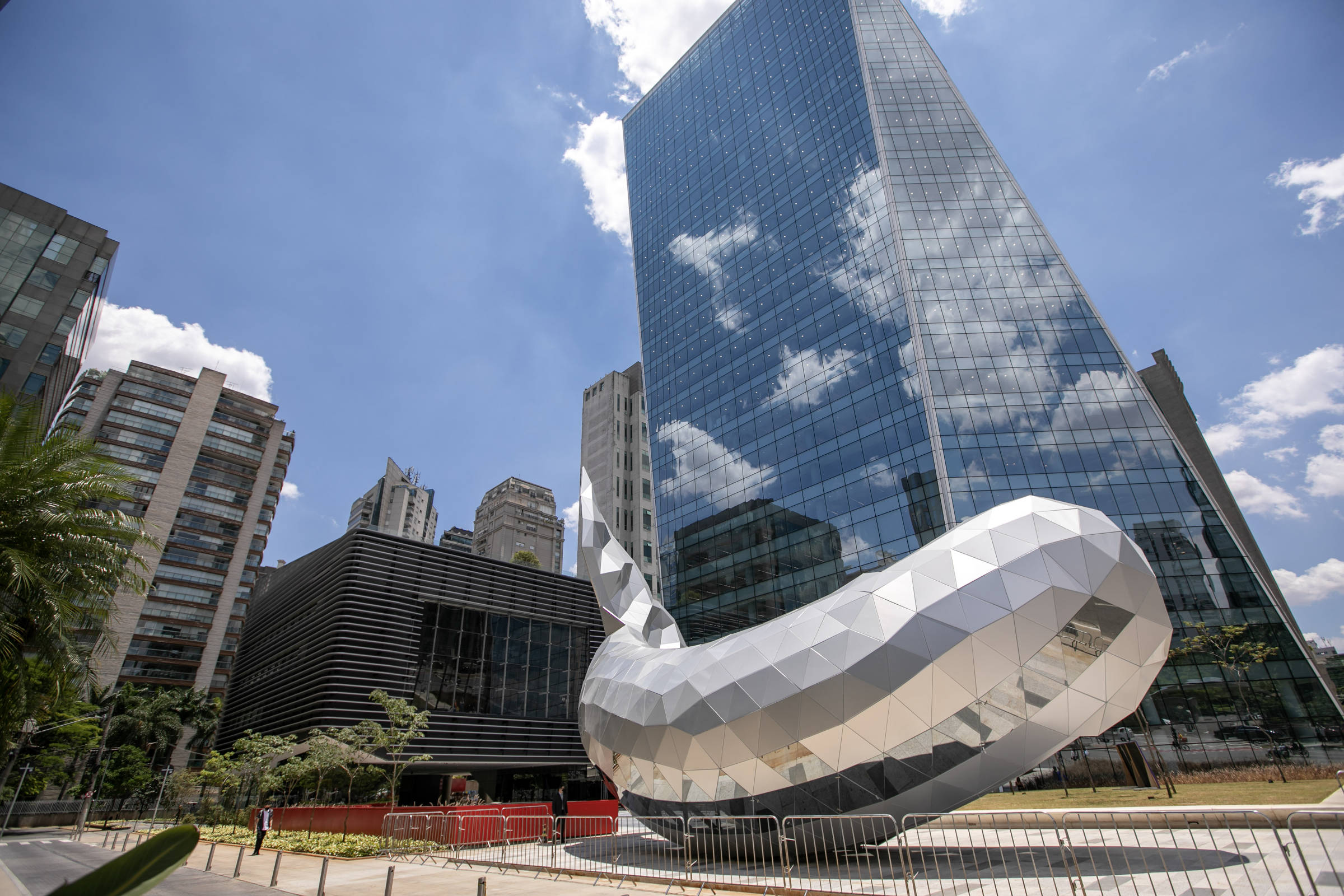 This past weekend, the 2nd Brazilian Cheese World Cup took place in São Paulo. There was great public participation at the product fair, while professionals carried out numerous parallel activities — including the awarding of the best cheese.

The winner, among 1,200 samples, was a Swiss Gruyère Reserve, and the runner-up was a Brazilian from São Paulo — the dolce bosco, blue goat cheese from Capril do Bosque.

But there was also another attraction to the event: the location where it took place. It was at the B32 theater, on the rich Faria Lima avenue.

Designed by architect Eiji Hayakawa, it is part of a complex that unites a commercial building; a square designed by the American Thomas Balsley, without walls or fences, open to the passing public and adorned by a metallic sculpture in the shape of a whale; and the theater, suspended over a covered area, with the back of the stage glazed which allows, from inside the theater, to see the square and the street.

During the pandemic, and the restriction on travel, the desire to take more control of the city grew in the world. Private buildings that are friendly to those who live in the surroundings have become even more important.

This idea of ​​coexistence is not new. In New York, commercial buildings must leave the ground floor free for passers-by. And even in São Paulo, the revolutionary Conjunto Nacional already integrated the interior space with the surrounding streets — but it was an exception.

The Birman 32 building, where the theater is located, is on the avenue that, at the time called Nova Faria Lima, represents an urban outgrowth. Gigantic, it was built on the rubble of huge expropriations, a golden opportunity to create a road with a generous and contemporary vision.

But, built by Paulo Maluf and his minions, it became just a safe fed by real estate speculation and the myopia of greedy architects.

It has become a wall of tacky and locked commercial buildings for passers-by, an arid region where cars huddle like armadillos, and you can’t see restaurants, shops, residences, let alone people on the sidewalks that flank fortified fences.

It’s the opposite of what happens in pleasant cities like Paria, where neighborhoods mix functions giving permanent life to environments — overlapping residences, shops, restaurants, ensuring movement throughout the day.

It’s what urban experiences — state or private — are looking for around the world, even more so when the pandemic has made us more intimate with where we live.

As a recent article in Afar magazine showed, San Francisco is investing millions in the India Basin Waterfront park, in a poor part of the city, to preserve the historic district.

In decaying Detroit, the Spot Lite warehouse combines cafe, art gallery and co-working during the day, and at night it becomes a lively dance club. In Tainan, Taiwan, an old mall turned Tainan Spring, with a public swimming pool and a tropical park.

Passing through Brazil, where he designs the restaurant at the Palácio Tangará hotel, chef Jean-Georges Vongerichten told me about his latest adventure in New York: he turned the Tin Building, the former fish market at Seaport, into a complex of restaurants with open kitchens, shops and a market.

Vila Anália is located in São Paulo, and takes to the east, in the same building, a combination of restaurants, confectionery, emporium, wine cellar — in short, an environment that provides hospitality for those who live in the region.

Cities need to embrace their citizens, especially those in the neighborhood — and with that they become more pleasant for those who live there, and also for those who visit them.

Facebook
Twitter
Pinterest
WhatsApp
Previous article
Theodorikakos with his Bulgarian counterpart for immigration: There is an organized business of exploiting unhappy people
Next article
France chooses…Greece: Impressive increase of French tourists in our country

Thessaloniki: A ring of fraudsters who “emptied” bank accounts was dismantled – Over 600,000 euros their loot

Thrace: Metropolitans and muftis call together Christians and Muslims to help Turkey