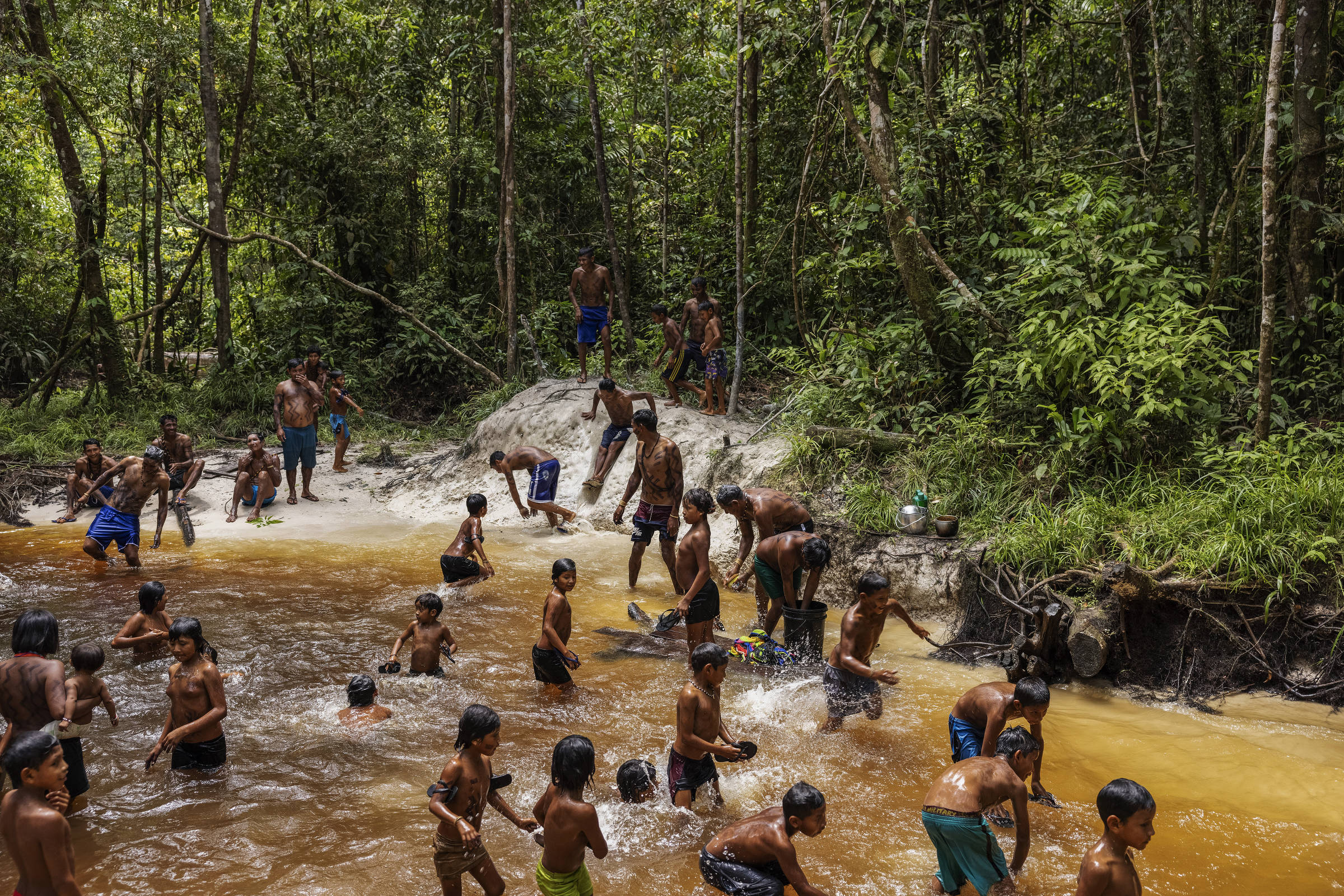 A three-dimensional sound invades the ears at the entrance to the Mynawa village (pronounced munaua), in the center of the Waimiri Atroari indigenous land. It comes from voices with different timbres, chants from different spaces and footsteps marked on the floor of hundreds of men and women lined up in a human corridor. It is a cultural manifestation, in an unprecedented meeting and protest.

The kinjas (pronounced quinhás), as the indigenous people of the territory are called, are meeting for the first time for a discussion against the time frame, a thesis espoused by President Jair Bolsonaro (PL) — to the point of suggesting that he would not comply with an eventual decision of the STF (Federal Supreme Court) on the matter—and limiting the demarcation of indigenous lands.

There are about 700 kinjas, from 40 different villages, gathered for days in the Mynawa village — almost 30% of the 2,439 kinjas who live today in 74 villages. THE Sheet was invited to attend the meeting.

The understanding among leaders is that the time frame would limit the extension of the demarcation of the territory, already determined by the Federal Court in Amazonas in 2013 and in 2016. The decisions were never carried out.

Without this extension, the territory is more vulnerable to invaders, such as loggers and illegal fishermen, especially on the fringes of the land, used by indigenous people.

And not only. The kinja understand that the thesis directly affects other peoples, in conditions different from theirs. The Waimiri Atroari land, which extends across Amazonas and Roraima, was approved in 1989.

“We have relatives who are still isolated and will need to demarcate their land”, summarizes a kinja at the microphone, listened attentively by dozens of indigenous people. “Our Senate is here.”

The Atroari Waimiri, who preserve their original language, tend to resist the presence of non-indigenous people in their territory, due to a history of aggression. The agreement of the leaders to receive a reporting team, however, is due to the growing concern with the time frame.

This most recent concern — a legal thesis with a direct impact on the demarcation of indigenous lands — is at odds with the nature of the pressures that have taken place in the territory. Over the decades, the kinjas have suffered the consequences of major undertakings by the military dictatorship, played without consultation, and have almost disappeared as a result.

First, a highway – the BR-174 – cut through the traditional territory to connect Manaus to Boa Vista. Construction began in 1971. Until then, contacts between indigenous and non-indigenous people were scarce or non-existent.

BR represented a humanitarian tragedy, a genocide in the understanding of those who follow the trajectory of the kinjas: 374 indigenous people remained after the works, compared to a previous population estimated at 1,500 people. Clashes with Army soldiers and fatal diseases such as measles, chicken pox and malaria are in the memory of survivors.

In 1981, it was the turn of a mining company to install itself and occupy 726 thousand hectares of the territory, generating changes in the lines of the future demarcation, which defined an area of ​​2.58 million hectares. The enterprise continues to exploit cassiterite and tin, with direct consequences for the villages. Contamination of water courses by waste from mining activities is common, according to the indigenous people.

In the late 1980s, the construction of the Balbina hydroelectric plant flooded 30,000 hectares of indigenous land. The project began in the 1970s, on the Uatumã River.

The work remains a disaster. It formed cemeteries of submerged or partially submerged trees; it displaced two large villages and forced the emergence of others, such as Mynawa, in a process that never ends, with villages abandoned each year; altered paths for boats and created spatial disorientation; made the water super acidic; extinguished fish from the kinjas’ diet.

The next major project is the Tucuruí line, which will connect Roraima to the national energy system. There are planned 250 high voltage towers in the territory, arranged in alignment with the highway, for 122 kilometers.

The line causes 37 environmental impacts, of which 27 are irreversible, according to members of the Waimiri Atroari Program, financed by Eletronorte as compensation for Balbina’s damage. In view of the apparent irreversibility of the works, and after disputes regarding the route and the lack of consultation with the indigenous people, a proposal for reimbursement was accepted by the parties involved.

In Mynawa village, in the midst of reminiscences about the impacts of these projects, the sound box echoed the protest against the time frame.

“We have a message. If the time frame is approved, we want an authority in here to talk. Our ancestors were warriors. There will be a lot of fights, a lot of war because of the time frame”, said an indigenous person into the microphone.

According to the time frame thesis, indigenous people only have the right to land if they can prove the occupation of the intended area at the time of promulgation of the Constitution, in October 1988. In 2017, an opinion by the Michel Temer government (MDB) placed the time frame as a guide. for new demarcations. The Bolsonaro government made use of the opinion. Nothing has been demarcated.

The STF judges an action on the matter. The rapporteur of the case, Minister Edson Fachin, refuted the thesis. The trial is suspended. “If he [Fachin] to achieve victory in this, I have two things left: hand over the keys to the Supreme Court or say that I will not comply. I have no alternative,” Bolsonaro said.

At the meeting, the kinjas do not touch the president’s name. The indigenous people refute the traditional political system: they do not have voter registration and do not vote. They also don’t have TV’s in the villages. But they have internet and cell phones.

“We don’t know them. [os políticos]. They can deceive us. So we are not interested,” says Warakaxi José Maria, 50, leader of the Keina village.

The Federal Court has already determined the expansion of the demarcation of the Waimiri Atroari land, beyond the stretches flooded by Balbina. Appeals in the second instance, on the initiative of different governments, have been delaying compliance with the decisions.

“The indigenous land is guaranteed by the registry, but in the future, more invaders may arrive. The approval of the time frame makes our surroundings more compromised”, says Temehe Germano, 38, leader of the Tapii village and one of the most vocal and active at the meeting in Mynawa.

Germano remembers a scene from when he was nine years old, when he returned to an area after Balbina was flooded. His eyes were used to a dense forest and a river in its natural course. Faced with the flood, he didn’t know where he was.

THE Sheet traveled the same stretch with Germano, almost 30 years later. The spatial disorientation continues, and it is necessary to mark dead trees with beacons—small glowing signs that act as waypoints. The “toothpick holders” are pruned by the indigenous people, as a way of opening new stretches in the lake.

“The water is dead. It is not possible to drink or fish. The bed has disappeared. We lost references when navigating here”, says Germano. Sixteen villages are on the fringes of the flooded area.

At the time frame meeting, there were at least two BR-174 survivors. Bare Bornaldo Atroari, over 60 years old, says that a trail for the construction of the road crossed an indigenous path that connected villages.

“My family was attacked by an army group. Father, mother, brothers, all died”, says Bornaldo, translated by the younger ones. “The attacks were at night. They released poison. Afterwards, we felt hot, feverish.”

The account of Kynetxiri Tomás Atroari, 66, is similar. Also with translation by the younger ones, he says that he began to lose relatives after “a group of soldiers came”. “No one consulted. It was a surprise. We thought it was the white man’s swidden. They took our way, our hunting, they took away the peace of the Waimiri Atroari people.”

Today the highway is monitored by the indigenous people themselves. They are the ones who remove and count the animals killed by the cars — there are already 16,000 animals dead since 1998. At night, chains prevent the traffic of cars and trucks that are not transporting perishable cargo or sick people, in a very tense atmosphere.

The Mynawa village, headquarters of the protest against the time frame, is named after the grandmother of the village leader, Sawa Aldo Waimiri, 44. He says he lost his father and grandparents due to the BR-174 highway, after bombs were dropped by the military, according to your story.

Sawa, one of the singers of the meeting, a tradition inherited from his father and grandfather, joins the chorus against the time frame. From inside the large, cool house where everyone in the village sleeps, he concludes: “Today war is no longer in the arrow, it is in the pen”.

Facebook
Twitter
Pinterest
WhatsApp
Previous article
Germany-UAE energy deal: Berlin will be supplied with LNG and diesel from the Emirates
Next article
Chaos without end in Iran: Reports of at least 54 dead in Mahsha Amini protests