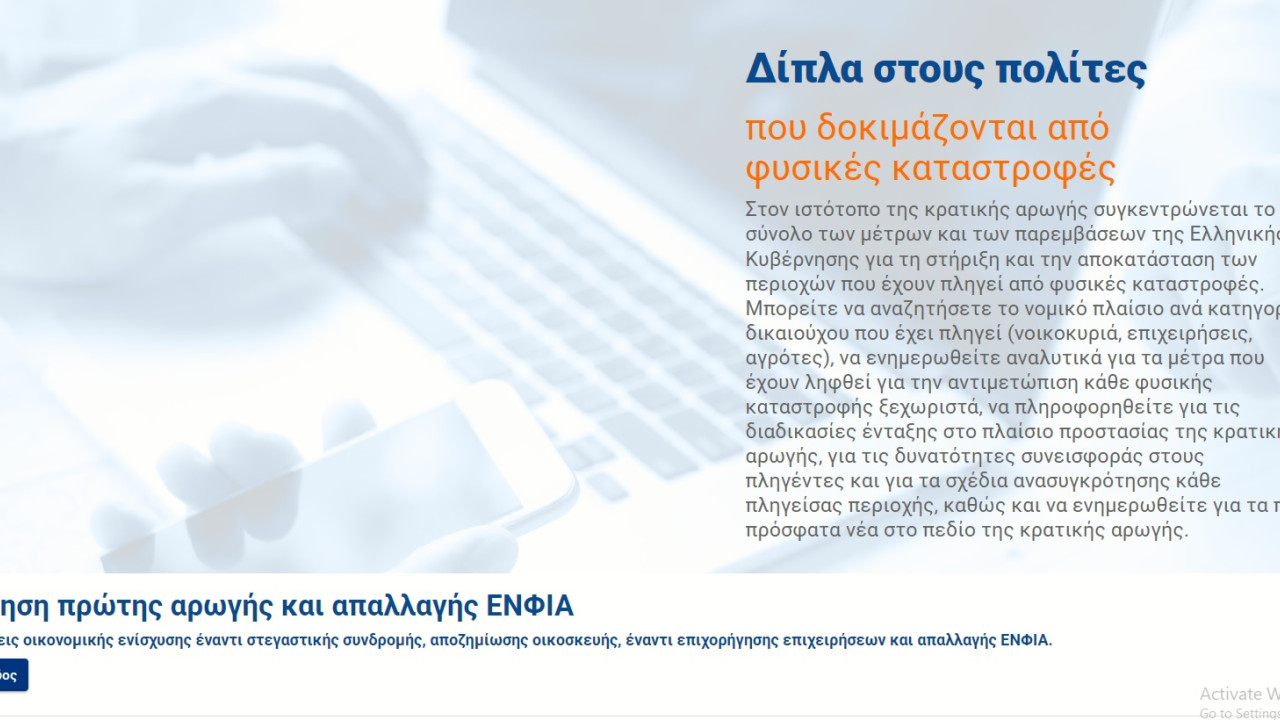 Arogi.gov.gr is fully operational to better serve those affected by natural disasters

According to a statement by the deputy minister in addition to the prime minister, Christos Triandopoulos, the website is designed to be simple and user-friendly, providing useful information about the measures planned and implemented by the Government in order to relieve those affected by natural disasters.

According to a statement by the deputy minister in addition to the prime minister, Christos Triandopoulos, the website is designed to be simple and user-friendly, providing useful information about the measures planned and implemented by the Government in order to relieve those affected by natural disasters.

With regard to the content of the site, there is, first of all, in a clearly visible place, a link that redirects to the AADE page for submitting an application for first aid. The main menu is divided into nine main sections: “Structure”, “Natural Disasters”, “Legal Framework”, “Press Releases”, “Donations”, “Frequently Asked Questions”, “Useful Links”, “Contact” and “Useful Phones” .

In the “Structure” section, the user can find information about the purpose of the new framework for state aid, the responsible Deputy Minister, as well as the Government Committee for State Aid, which is the main mechanism that coordinates and ensures at national level the implementation of institutional framework for state aid, rehabilitation, but also reconstruction, after natural disasters.

In the “Natural Disasters” section, there are separately the latest incidents of natural disasters, marked with pins on the map of Greece, while there is also a categorization by category of phenomenon. In each event, all the support and recovery measures planned and implemented by the Government are recorded, together with the recent press releases, but also all the relevant decisions and circulars.

The “Legal Framework” section includes all the relevant legislation, which, in fact, is categorized by type of beneficiary: households, businesses and farmers. In order to better organize the content, there is a further categorization by type of support (e.g. suspension of obligations to the State, housing assistance and business grants). The “Press Releases” section includes all official announcements related to government aid issues, while the “Donations” section has content about the options available to those interested in helping those affected by natural disasters. Specifically, there is information about the State Aid Account, the institution of the contractor, but also the E-dorees platform.

At the same time, the “Frequently Asked Questions” section includes the most frequent questions asked by citizens, together with detailed answers. In this context, detailed clarifications are provided regarding the completion of the application for first aid, the procedure for granting housing assistance, the steps to be included in permanent arrangements of contributions/debts in case of natural disasters or natural disasters, special arrangements for suspension of employment contracts due to natural disasters as well as tax incentives for donations.

In case the visitor has a question that is not covered by the content of the site, the sections “Useful Links” and “Useful Telephones” provide the contact details of the competent Services, which can be addressed for further information.

On the occasion of the website’s launch, the Deputy Minister to the Prime Minister, Responsible for State Aid and Rehabilitation from Natural Disasters, Mr. Christos Triandopoulos, said: “In the context of the reform and modernization of the state aid regime, the Government launched the renewed website arogi.gov.gr. Our aim is to provide the fastest and most efficient service to our fellow citizens who have been affected by a natural disaster. For this reason, after all, immediately after the great fires of 2021 we activated the arogi.gov.gr platform, so that the affected households and businesses could digitally submit their application for first aid and quickly receive a sufficient amount that would helped during the first difficult period after the fires. Since then, this measure has been extended to other cases: the earthquakes in Arkalochori, Samos and Thessaly, but also the recent fires in Penteli, Megara, Vrisa and Krestena.

The new website arogi.gov.gr offers multiple options to the visitor. Firstly, it enables him to apply for first aid if he is eligible. In addition, it provides information both on the legal framework of state aid -separately for households, businesses and farmers-, but also on the specialized measures that the Government plans and implements for each region that has been affected by a natural disaster”.

© APE-ME SA. The copyright belongs to me

Facebook
Twitter
Pinterest
WhatsApp
Previous article
In the age of robots, call center will have operator for at least 8 hours
Next article
Active World War II shells continue to be unearthed from Thessaloniki construction site