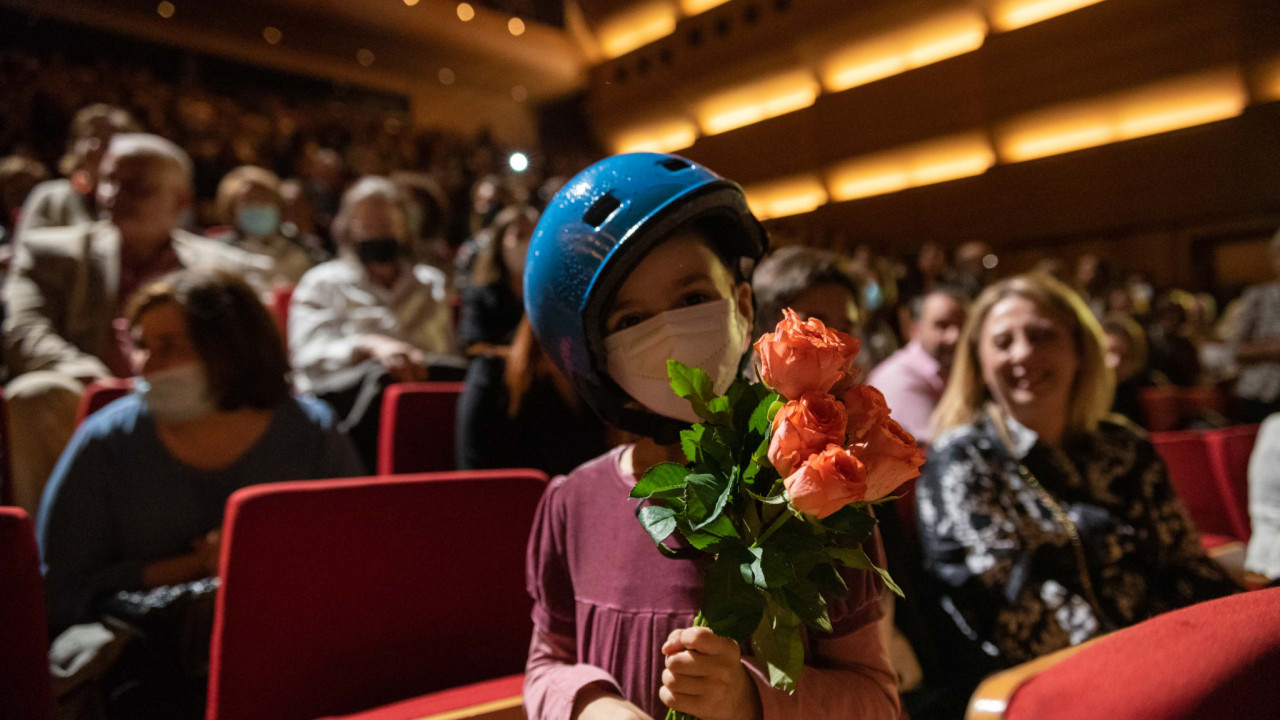 The constant companion of the “Flame”, Mrs. Elisavet Fotinelli Kritikou, is a lady of few words, but a very great work

“We are celebrating 40 years of activity and 20 years since the operation of our first guesthouse. On October 21, 2022, we welcomed our first child. We are parents of children who suffered from cancer” said in her opening speech, in the presence of the President of the Republic Katerina Sakellaropoulou, Mary Tryfonidis, Alexandra’s mother and president of the “Association of Parents of Children with Neoplastic Disease – Floga”. Alexandra was born in 1980, fell ill in 1984 and passed away in 1986. “At the time of diagnosis each of us looks around for guidance and help, not charity and charity. This is exactly what we find in “Flame”. And as long as the difficulties follow one another, we remain in the “Flame”. As we depended on the previous parents, so the next ones depend on us. Many parents, many years. This is our “Flame”, a relay race of love” noted Ms. Tryfonidis, who later added “cancer made my family smaller, but the “Flame” hostel made it bigger”.

In a packed auditorium, in the Greek World, the organization celebrated on Friday, October 14, 40 years of uninterrupted presence, continuous support of the children, their families, but also the hospitals, the health professionals, whenever they needed it. In the context of the event, the historian and professor of EKPA Maria Efthymiou reviewed the history of the Health system and the contributions it has received from time to time, stressing that the “Flame” deservedly continues a tradition of giving.

THE Nikos Papagelis, cycling champion and Paralympian, child of the “Flame” who when he got sick had to amputate one of his legs, spoke about his experience, proved that no obstacle can stop beauty, but also was the host of the evening, passing the word to the first president of “Floga” Yanis Maistro for a short greeting. Eleni Vasilatou Kosmidi, pediatrician, hematologist, oncologist, founding and honorary member of “Floga”, also addressed a few words of heart and essence, shortly before the event moved on to the real protagonists, i.e. the parents, the children who fell ill, their siblings, the families fighting the greatest and most agonizing battle.

In “Flame”, among all others, the mother of Thanos who was accommodated in the hostel, found “a big smile and, finally, everything we needed so much. As I think about it, in the end, that phone call I made at that time when I was lost, not knowing exactly where I was receiving, was the right phone call that helped me to support myself psychologically to support my child as well. In closing, I found nothing more beautiful and truer than a “thank you, my Flame”” said Thanos’ mother, in front of an already moved audience.

Afterwards, Christina, who got sick at the age of 13, but is now well and studying to become a social worker, commented “cancer took years from my life but it didn’t cut my wings”. Referring to her own experience, she described how “suddenly I found myself in a room full of little carafe heads, who had a strange medicine running through their veins. I soon became part of the image that when I first saw it shocked me. But no one dared to say the word cancer to me until I said it myself. To fight your enemy, you must know his name. So coming from Igoumenitsa, not having a house in Athens, I found the biggest house, full of people. The house that would give me security throughout my struggle, the house of our “Flame”.

Aristotle came from Arta for the first time to “Floga” at the age of 10. Since then, due to relapses, she was accommodated twice more in her hostel. His health condition has resulted in him monopolizing his parents’ interest and his twin sister, Konstantina, now a medical student, has spoken about her perspective on this life adventure. “To this day, 10 years later, Aristotle’s illness plays a decisive role in my life. Initially, Aristotle and my mother’s settlement in Athens for the duration of the treatments brought about several practical problems. However, that was not the most important thing. The most important thing was the lack of my mother, but also of my father who was also often absent,” Konstantina explained, adding that she felt “lonely” and that she had “no one” to rely on. “Over the years I’ve learned to downplay my own problems, step back, put myself second to others, give my best and be patient. On the other hand, there were also strong feelings, initially the fear for Aristotle’s life, permanent anxiety, anxiety, sadness, many times regrets that I did things for me, that I had a good time while my brother was in the hospital and he didn’t have the opportunity to live them. I was trying to help him, when I needed help too,” stressed Konstantina, so that the present parents remember that despite the obvious difficulties, balance is important. “It’s very hard to hear at 13 that your brother is likely to die. And this is my only crime, that they didn’t protect me psychologically as much as needed because they thought I could handle everything. So I don’t know how I would be if all this didn’t happen. All I know is that today Aristotle is fine and I’m really happy because all these years I fought for it were really worth it and I’ll do it for as long as it takes,” concluded Konstantina.

But, unfortunately, not all stories end well. Georgia Kokkinou is the mother of Andreas and vice-president of “Floga”. Andreas got sick at the age of 10 and left just a year later. “The terrifying absence of Andreas” from her life, Mrs. Kokkinou put it in a short story, “The tree of life”, which she read in front of an auditorium that visibly buckled under the weight of her words.

“In 2016, we made our first application to the municipality of Athens, asking that a small section of road located between the buildings of “Floga” be classified as a pedestrian street. 6 years have passed since then. In April 2022, the decision to transform the area into a pedestrian street was finally published in the Official Gazette. Our hostels don’t have a yard and the only way out was this small piece,” said the president of “Floga”, Mrs. Tryfonidis. “The compressors have started working,” she emphasized, handing the mayor of Athens, Mr. Costas Bakoyannis, an award for his contribution, as she noted, “he tried a lot to make this happen. The bureaucracy is terrible, the agencies involved are many, we know that it was not easy and that the discussions in the 7th district of Athens were episodic.” However, it was worth every effort because “the everyday life of our children enters a new foundation. In the summers when all the other children are on vacation, at the seas and in the mountains, ours didn’t even have a 5 meter yard, just a shed. Now they will go outside, they will see the sky. Alexander had once told me “Mr. Mary, that is, in Athens to see the sky we have to lie on the pavement?”, said Mrs. Tryfonidis. The mayor of Athens, thanking for the honor, underlined that, however, “objectively, the last ones in this room who deserve any recognition or any award are us. I told Mrs. Mary in the morning that she does the hard work and we do the easy work. She does the big things and we do the small things. So the award goes to the children, to the “flames”, to their families, to the doctors, nurses, to the friends who support the “Flame”. Be well always.”

The constant companion of the “Flame” Mrs. Elisavet Fotinelli Kritikou is “a lady with few words but a very important work. A lady who does not give alms to the crumbs that fall from her table. Where she and her life are simple, like ours. Great benefactor of the home where we host the transplanted children. Nine children in the same number of apartments and a large event hall” emphasized Mrs. Tryfonidis, handing her the “Flame” award, while Mrs. Fotinelli Kritikou wished that the “”Flame” of love and contribution would remain lit for many, many years to come ».

“The Hellenic Society of Pediatric Hematology Oncology (EEPAO) includes all the doctors of our country in the public and private sector” who work in this field, explained Ms. Tryfonidis, adding “they are our children’s doctors. Together with all other specialties of pediatrics they contribute to the miracle of healing our children. Our doctor is the one who will bring the evil mantas to our house, at the time of diagnosis, at zero hour. All of us parents anxiously observe the struggle of doctors and their endless hours of work next to our children. For a while we become a family.” In honor of all health workers but also “the invisible scientists in the laboratories that develop medicine”, “Flag” awarded the president of EEPAO, Mr. Antonis Kattami. Representing his colleagues and all the contributors of the public health chain who “work under adverse conditions”, as he said, “I want to thank you for being by our side, in every moment of our daily life. Because you take care of our children, you bring us doctors to fill in the gaps that the State has not tried or cannot cover, you are by our side because you offer machines to our hospitals, because you helped us enter the European medical community. “Floga” has taken over the cost of covering the research protocols, thanks to this we are an equal member and can offer all the treatments to the children of Greece”, concluded Mr. Kattamis.

Mrs. Tryfonidis also awarded Klimis Asikoglou from the PARASOL company for her support for 20 years in everything related to the organization’s communication at no cost at all, and Eleni Sourani from the SocialDoo company, who undertook the organization of the evening completely free of charge . The evening ended with a musical performance by the choir of the Athens music school, during which the children talked about their feelings, “shame”, “insecurity” but also “strength”, and with songs from the traditional orchestra of school.

Facebook
Twitter
Pinterest
WhatsApp
Previous article
Pagonis in SKAI: Difficult things are ahead of us – Increase of hospitalizations by 10% in simple beds
Next article
Turkey also asks for change: Attack on Notis Mitarakis for the “naked migrants” they sent to Evros