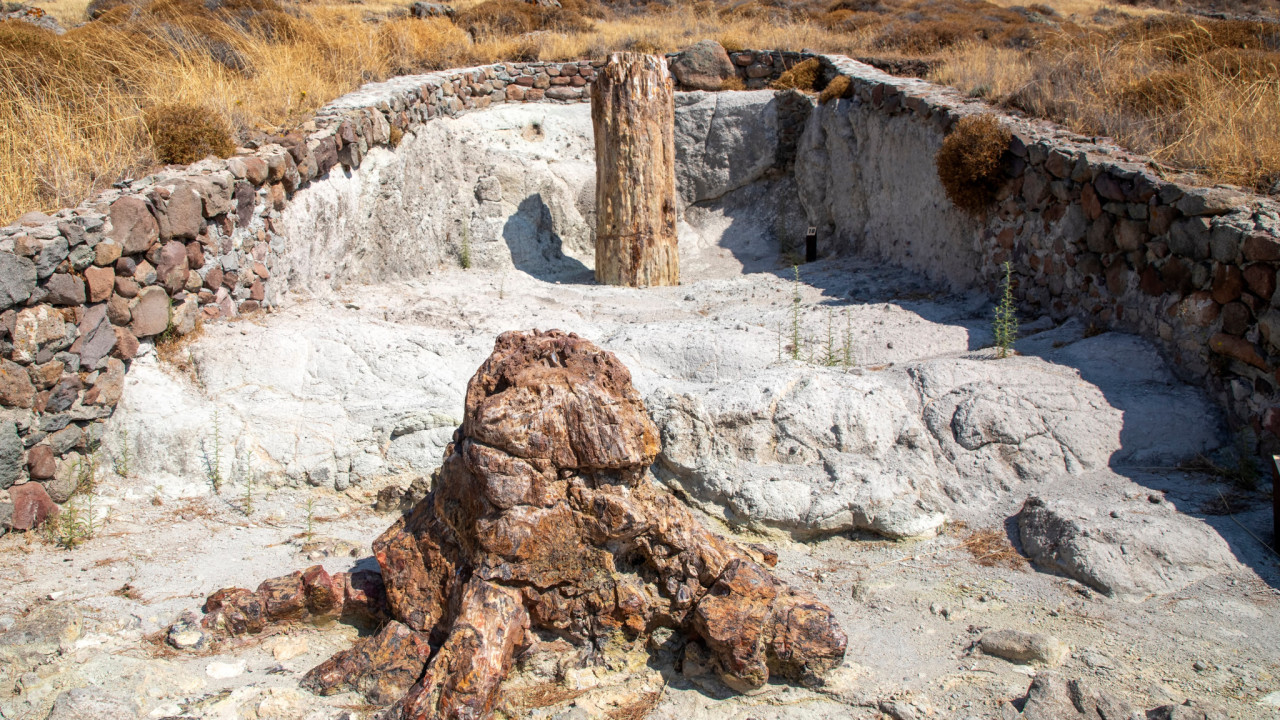 “Among the sites evaluated by the International Commission, the first 100 Geological Heritage Sites include two sites from Greece: the petrified forest of Lesvos and the volcanic caldera of Santorini”

The certificate was awarded today for the inclusion of the Petrified Forest of Lesbos in the first 100 Geological Heritage Monuments.

The award took place at the special conference held to celebrate the 60th anniversary of the establishment of the International Union of Geological Sciences in collaboration with UNESCO in Zumaia (Basque Coast, an area recognized as a UNESCO World Geopark) in Spain.

The award was followed by the presentation of the natural monument by Professor Nikos Zouro, director of the Natural History Museum of the Lesvos Petrified Forest.

The International Union of Geological Sciences, in collaboration with UNESCO, took the initiative to create a list of the top areas of geological interest worldwide

“It is particularly honorable for our country that among the sites evaluated by the International Commission, two sites from Greece are included in the first 100 Geological Heritage Sites: the petrified forest of Lesbos and the volcanic caldera of Santorini” he says speaking to APE -MEP Professor Nikos Zouros.

The Petrified Forest of Lesvos is a rare petrified forest ecosystem that includes large concentrations of petrified trees and animal fossils that were covered by volcanic material and fossilized in place 18 million years ago. Inside layers of volcanic ash are revealed standing and lying fossilized trunks, branches, roots, fruits and leaves of trees as well as fossilized bones and teeth of animals. Important fossil-bearing areas are also found in the coastal zone and in the marine area west of Lesvos.

The Lesbos Petrified Forest is one of the four founding members of the European Geoparks Network in 2000 and the Global Geoparks Network in 2004. It is a geological heritage site that has been used for decades by schools to implement environmental education activities and universities in earth sciences, geohazards and climate change.

The Caldera of Santorini

The caldera of Santorini, with its mesmerizing geomorphology, the unique volcanic formations that make it up and its amazing geological history, is a focal point worldwide not only for tourism but also scientifically, with a number of scientists from Greek and International Universities implementing remarkable research project in the area.

Its wider promotion and protection, as a result of its successful inclusion in the 100 most important geological monuments worldwide, will give the opportunity to a large number of visitors as well as to the island’s own inhabitants to appreciate the greatness of the processes of our planet in this so important corner of our country.

Observing the successive layers of lava and ash that built the island over time but also admiring in awe the imposing slopes created as a result of one of the most violent and decisive volcanic eruptions in history, the common man will be able to connect with the Earth, to understand and appreciate its power, in Santorini.

Facebook
Twitter
Pinterest
WhatsApp
Previous article
‘The time is perfect to invest in aviation in Brazil’, says American executive
Next article
Fierce reactions in the Turkish press for Mitsotakis-Soltz statements