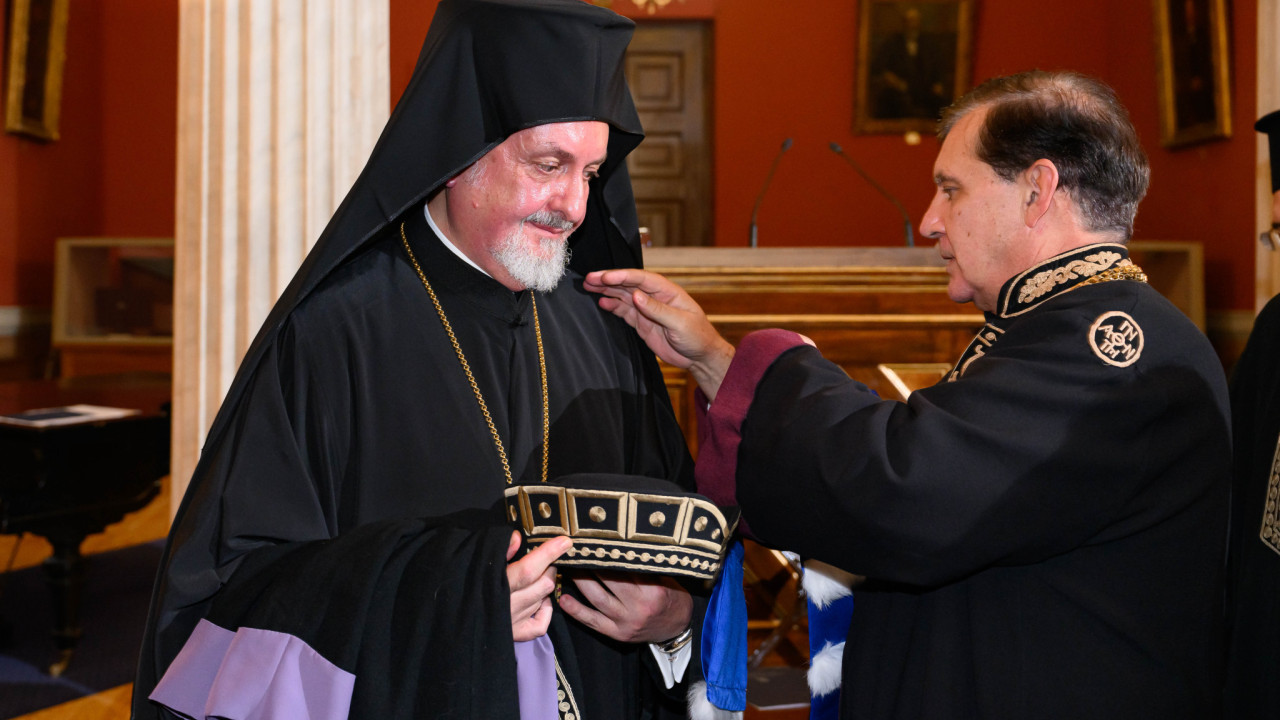 Metropolitan Chalcedon developed the theme “Light wears, light shines, light is: The theoretical artifice of the Chalcedonian dogma as a measure of the Society in dialogue”

Honorary Doctorate of the Department of Social Theology and Religion of EKPA was announced yesterday, Tuesday, November 1, 2022, the first Hierarch of the Ecumenical Patriarchate, Metropolitan of Geron Chalkidon, Mr. Emmanuel, in the packed Great Ceremony Hall of the University of Athens. The Rector, Professor Mr. Meletios-Athanassios Dimopoulos, opened the ceremony by addressing the honoree. The dean of the Theological School, Associate Professor, put on the school robe Mr. Christos Karagiannis, while the resolution was read by the President of the Department of Social Theology and Religion, Metropolitan of Krini Mr. Kyrillos.

The praise of the honoree was composed by the Professor of the Theological School, Mr. Emmanuel Karageorgoudiswho noted: “The inclusion of the Elder Metropolitan of Chalkidonos in the choir of honored Doctors expresses our like-minded empathy to radiate with him, that diffused spirit in the emotional centers of the whole world. Every moment of ours must already be a moment of the new reality; every result of it, the result of a new, more daring, intervention in the world. Chalcedon Emmanuel, Doric, full, true, brings alive and – therefore – attractive the poetic ecclesiastical ways of Byzantium. It is the Hierarch, who, like the nautilus, is aware at every moment of the dimensions as well as of the position, where he is and where the imaginary temple of the Church is always moving. The Truth, which he expresses, is the truth of the wise Hierarch and – fortunately at the same time – the truth of the most innocent child, as the first nature of things loves to choose and manifest itself in critical moments”.

The Metropolitan of Chalcedon developed the subject “Light wears, light shines, light is: The theoretical artifice of the Chalcedonian doctrine as a measure of the Society in dialogue”, in a landmark speech on modern Orthodox theology. Among other things he said: “Doctoralism is not a type of arbitrarily imposed, a form of ‘laboratory’ theology. It is the expression – in an eternally fruitful way – of the essential reality of the Christian life in faith in the Body of Christ, which is the Church. Mount Chalcedon was not a self-evident metaphysical statement. It was a doctrinal statement, a confession, a declaration of faith. It must not be isolated from the overall vision of the great mystery of piety, which must be grasped through faith. It was a theological key both for the history of the New Testament and for the experience of the Church, which itself belongs to this mystery, being the Body of the Incarnate Word.”

The highlight of his speech was when he referred to the measure of Christian dialogue: “In the Ecumenical Patriarchate we have more intense than all the bitterness of the failed attempts at reconciliation, when the Christian Empire of the East found itself in political weakness. However, even in the most difficult moments of the Genus of Christians the ecclesiastical attitude of the believing community remained rough. For every Synod of Lyons, Orthodoxy gives birth to a Gregory Palamas, for every Ferrara-Florence a Mark Eugenicus. In today’s times the guardians of the Faith’s treasures remain vigilant. The First of Orthodoxy, the Christ-like pastor of the Constantinople Church, Ecumenical Patriarch Bartholomew, the visionary, the just, the philanthropist and the supreme healer and interpreter of the Canonical Tradition, takes care of the preservation of the Orthodox testimony and increases the bequest. I am happy, because throughout the course of the modern inter-Christian dialogue there have been no snarls and gnawing on the part of the Orthodox. Perhaps, in some cases there was excessive enthusiasm and zeal, but never treachery. Orthodoxy will not live in another Ferrara; we stand well.”

The former President of the Republic also attended Prokopis Pavlopoulosthe Deputy Minister of Education Zeta Makrirepresenting the Prime Minister Mr. Kyriakos Mitsotakis, the Minister of Tourism Vassilis Kikiliasthe Deputy Minister of Foreign Affairs Andreas Katsaniotis, the former Minister K. Gavroglou as a representative of the Leader of the Official Opposition Alexis Tsipras, the MP Michalis Katrinis as a representative of PASOK Leader Nikos Androulakis, o Mayor of Athens Kostas Bakoyannisthe former President of PASOK Evangelos Venizeloss, the Members of Parliament Dora Bakoyannis and Kostas Kyranakis as well as the Director of the Political Office of the Prime Minister Mr. Kypraiou.

The Prosecutor of the Supreme Court was also present Isidoros Dogiakos, Lords of the Ecumenical Throne, including the Commander of Mount Athos Athanasios Martinos, the Vice President of the Latsis Foundation Evangelos Chronis the businessman Gerasimos Fokas and the lawyer Sakis Kehagioglouas well as personalities from the academic community, Letters, Art and civil society.

The announcement ceremony closed with the tenor Ioannis Filiawho performed songs from the international and domestic classical repertoire.

Facebook
Twitter
Pinterest
WhatsApp
Previous article
Dendia’s response to Cavusoglu: The position of the UN and the State Department has caused irritation in Turkey
Next article
In Thessaloniki for the first time the royal couple of the Netherlands – They took a tour and rode a bike