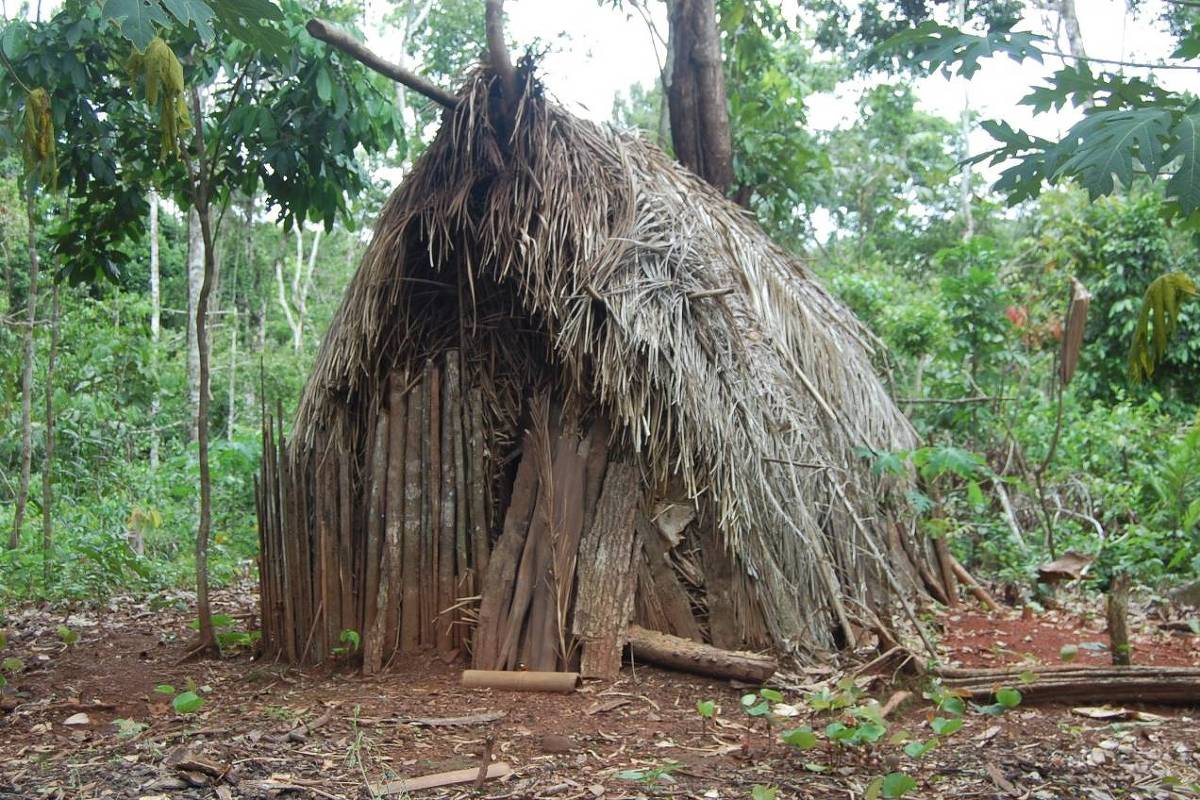 ‘Indian of the hole’ faced erasure, built 53 houses and sought spiritual meaning by digging the earth

A man can, in the course of a lifetime, build himself 53 houses, one after the other – sometimes one each month – in order to guarantee his permanent state of fugue and his survival.

It is also in the field of human possibilities to live in isolation, alone, in constant denial of conviviality and contact for decades on end, due to the extermination of an entire people.

Tanaru, the “hole Indian”, faced extermination up close and started to look at his surroundings from afar.

After decades of isolation in the forest in the south of Rondônia, the body of the indigenous man –the last of his people– was found by Funai (National Indian Foundation) workers in a hammock, inside his last hut, on August 23.

In each of the huts, Tanaru dug a hole in the ground to achieve some mystical, spiritual or cosmological meaning for his life.

Alone, he was responsible for preserving an island of Amazonian vegetation, measuring 8,070 hectares, surrounded by open fields and farms in the region of Corumbiara (RO).

Tanaru’s death ended the saga of an indigenous survivor of a genocide that was never investigated – the term and the finding that there was never an investigation and punishment come from the Federal Public Ministry in the state.

Tanaru’s surroundings were interested in his disappearance. Farmers who surround the area filed with Funai, in the moments following the announcement of the death, requests to overturn the restriction on the use of the territory.

The move even preceded his own death. There were frequent approaches from ranchers to teams working in the region with surveys about what would happen to the area when the “hole Indian” died.

None of the farmers wanted to talk to the Sheet🇧🇷 They are tenants or buyers of land who did not necessarily participate in the first acquisitions, in the 1970s, and they know that their interests prevail over the rights of native peoples, especially in the government of Jair Bolsonaro (PL), which will end in a month and a half.

The act of the president of Funai, Marcelo Augusto Xavier da Silva, in the face of death made this clear. He barred the burial of the “hole Indian”, even with examinations completed by the Federal Police, which found no evidence of violent death or that Tanaru was the victim of a crime.

It took a public civil action by the MPF and a decision by the Federal Court to guarantee the burial in the hut where the indigenous man was found.

Tanaru’s life proved that the interest in his disappearance had always existed. And that explains the option for radical isolation.

In the 1980s, landowners gave poisoned sugar to the indigenous group, according to reports given to retired FUNAI indigenist Marcelo dos Santos, 69.

He worked in the region between the 1970s and 1990s and was responsible for the field work that proved the existence of the “Indian of the Hole”, with identification of the huts and a first contact with the indigenous people in the second half of the 1990s.

The meeting was recorded by documentary filmmaker Vincent Carelli in the documentary “Corumbiara”, from 2009. In the film’s field work, another constant presence is the indigenist Altair Algayer, coordinator of Funai’s Guaporé Ethno-environmental Protection Front, who cataloged each hut, he kept monitoring the area and was decisive for respect for the life chosen by Tanaru.

According to Santos, the “hole Indians” visited points on neighboring farms two or three times a year. There were four or five men, and they were looking for sugar, machetes and products from the fields.

“On one of these visits, an owner asked employees to give him sugar with poison,” he said.

Afterwards, there was a shooting attack on the natives —described as “angry”, “hairy” and who used to be naked— followed by the cutting down and burning of huts.

Finally, only one was seen. A logging company employee, in the 1990s, found a hut 40 km from the Funai staff camp –Santos among them– in order to try to locate indigenous people. He was the “hole Indian”, the only survivor of his people.

There were several attempts at approximation, generally refused by him, who also did not accept edible things. At first, feeling threatened, he shot an arrow at a Funai employee, who survived. The initial insistence on contact was one of the reasons for the native’s changes, they concluded.

Over time, Funai consolidated the understanding that the best policy was respect for voluntary isolation, guaranteeing the preservation of areas used for subsistence and the traditional way of life.

Tanaru got to know Funai members and even warned about traps, such as holes filled with skewers to hunt wild pigs.

The habit of digging holes in the soil of huts has nothing to do with safety, hunting or preparing sleeping space. They were also dug by other members of their people, and there is no description of the habit by any other group in the country, according to scholars.

The most likely reason, they say, is that the holes had some spiritual element. The last one he made was more than two meters deep and narrow, showing no sign of use.

Tanaru was a tall indigenous man by standards: 1.74 m, according to forensic anthropology analyzes described in the report, and it is estimated that he was over 60 years old.

In the hut where he died, there was a large amount of stored corn and a lot of papaya in the planted garden. Before his solitary life, he and his family also lived from plantations and hunting, according to indigenists.

Before dying, still according to reports, he cut down three trees to collect edible larvae, collected honey from five other trees, dug seven holes as traps for animals, collected Brazil nuts and extracted resin.

The isolation extended to the relationship with other peoples in the region, although there were visual contacts, whistles exchanged and gifts, such as arrows, according to documents.

Tanaru prepared for death. He wore a “hat” on his head and plumes of macaw feathers on the back of his neck, attached to his neck. From the neck, down the back, threads of buriti fibers descended. The indigenous had the habit of using these threads. In a Funai video in 2018, in which he appears cutting a tree with an axe, he wore the adornment.

Bows and arrows were propped beside the hammock where he died. Belongings remain in their places, servers say.

After the president of Funai refused, the burial was carried out in the same place as the death. Purá, one of the three surviving Kanoé of the people who live on the Rio Omerê land, conducted the burial.

The farewell was made following the traditions of the indigenous peoples of the region: Kanoé, Akuntsú and Tupari. The ethnicity of Tanaru and its people has never been identified.

Now, doubts remain about the fate of the indigenous land, undemarcated territory whose preservation is guaranteed by a Funai decree that determines the restriction on the use of the area, valid until 2025.

Ordinances of this type are edited for territories where there are isolated indigenous people and there is no demarcation. With the death of the “hole Indian”, Funai can revoke it.

Five farms surround the area. The owners say they acquired the territory in the 1970s, within the policy for the allocation of the Amazon adopted by the dictatorship (1964-1985).

There has always been pressure for more deforestation and space to raise cattle. Funai did not respond to questions from the Sheet about what the posture will be in relation to the area.

For the indigenist who located Tanaru, there is no doubt that the land belongs to the Union and needs to be preserved. “The landowners acquired the area before the presence of the Indians was confirmed. These titles issued are null before the law, the sale should not even have taken place. Whoever demarcated the lots had already found traces of the Indians”, says Santos.

The indigenist asks: “Are you going to release the area for occupation by whoever is behind this genocide?”