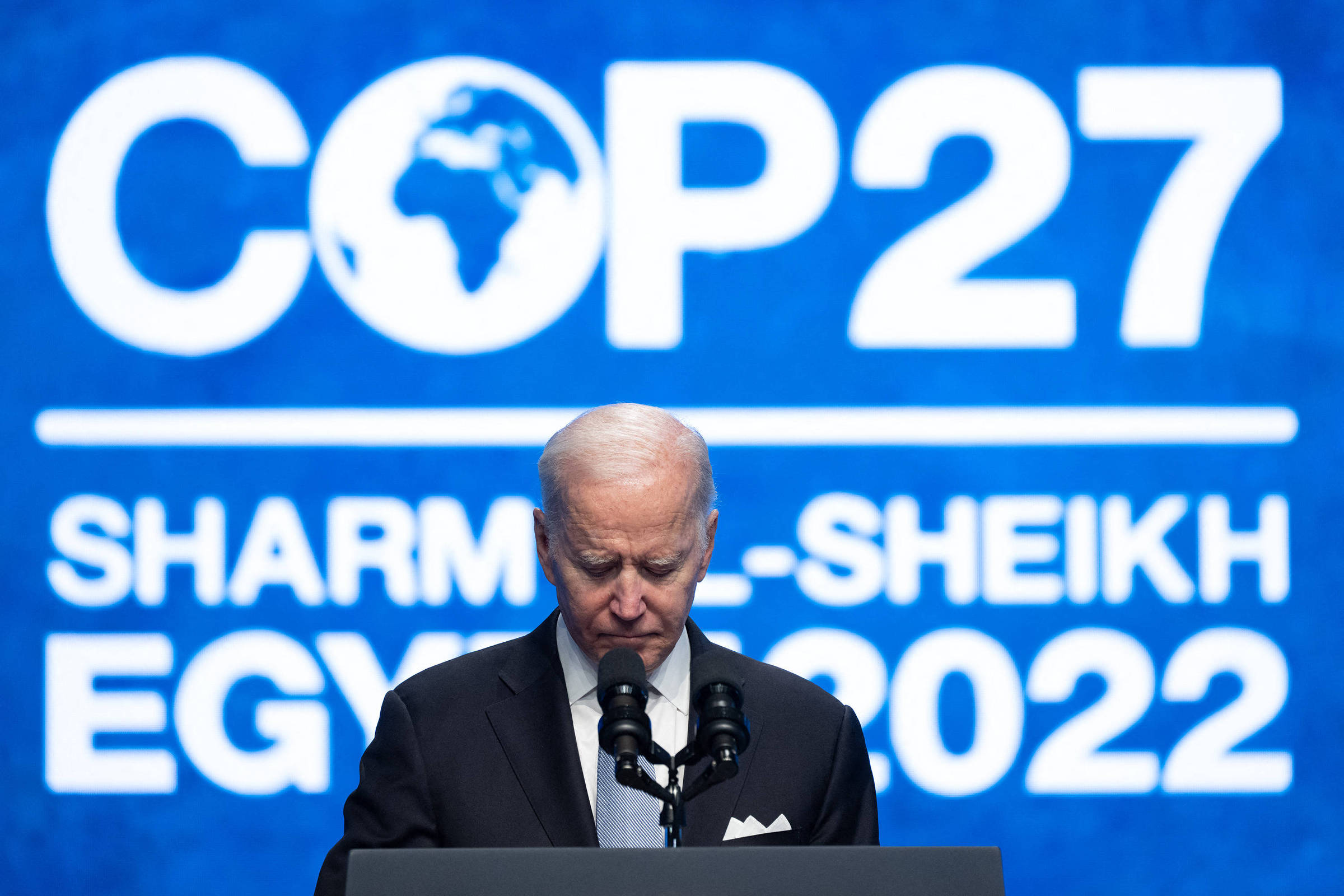 There were less than three hours between the moment when Joe Biden’s presidential plane landed in Sharm el-Sheikh, Egypt, and when it took off again, on the 11th.

In a packed auditorium at COP27, the UN climate conference, he spoke about his government’s advances in the climate area, clean energy and the reduction of global temperatures. He didn’t talk, however, about what many of the other countries wanted to hear: money.

Biden has something to show in the climate field. He was elected with an extensive environmental agenda and this year approved the biggest incentive package to combat the climate crisis in the country’s history. Despite the praised project, the plan’s absence of a fund for poor countries to offset damages has caused frustration.

At the last minute, early this Sunday (20), rich countries approved the creation of a fund to finance more vulnerable nations, which represented a change in posture by the US government. Despite the change in tone, the president will have internal difficulties to carry out the measure, which will depend on approval in Congress.

This is because, starting in January, his party will lose control of the House, as defined by the legislative elections that took place at the beginning of the month and gave a majority in the House to the Republican Party — much less willing to authorize the sending of resources to other countries to deal with with the climate emergency.

“The Biden administration should focus on reducing domestic spending, not sending money to the UN for new climate deals. Innovation, not reparations, is the key to fighting climate change.”

The United States is the second largest emitter of pollutants in the world, behind only China. In 2019, it was responsible for 11.6% of global carbon dioxide emissions, equivalent to 5.7 billion tons of COtwoaccording to the Climate Watch platform.

In per capita emissions, however, proportional to the size of the population, Americans emit more than twice as much pollution as the Chinese.

The country has suffered from the climate crisis. The most recent extreme event was Hurricane Ian, which hit the Florida coast hard and left more than 150 people dead.

Mississippi went days without potable water between August and September after floods crippled the state’s supply. In the west of the country, Arizona, California, Colorado, Nevada and New Mexico are experiencing the worst drought in 1,200 years.

Biden received the government two years ago from Donald Trump, the president who withdrew the United States from the Paris Agreement and revoked 98 measures in the climate area of ​​previous administrations, according to a count at the time of the New York Times.

On the first day of his government, on January 20, 2021, the Democrat ordered the country’s return to the climate agreement.

In order to reach the goals, its great trump card so far has been the approval in August of an environmental mega-package that foresees financial incentives in the amount of US$ 370 billion for the transition to clean energy.

It also provides for the reduction of greenhouse gas emissions by up to 1 gigaton, ten times more than any other US climate law.

The project, whose goals must be achieved by 2030, also plans to increase the resilience of communities in relation to natural disasters, such as floods or droughts.

Although it has achieved results in the domestic environment, the government’s achievements so far are more modest in the global arena. The main point is a project known as Prepare, which aims to enable developing countries to adapt and better manage the impacts of climate change.

Even with full control of the Legislature in the first half of the government, Biden has already struggled to get the resources. In 2021, the government wanted to release $2.5 billion for other nations to deal with the climate crisis, but could only get $1 billion in Congress.

But the American public isn’t exactly reticent to the idea of ​​a damages fund. A survey released last week by the Politico portal found that 53% of voters believe that the United States should increase contributions to developing countries to help them with the climate crisis.

US State Department spokesman Christopher Johnson told the Sheet that the country’s global focus today is on increasing the resilience of other nations.

“Creating a fund is not a responsibility the United States could take on alone,” he said. “It would have to be the result of ongoing negotiations with other partners, in the G20 or other countries, to see if they are willing as well.”

Without congressional control, the president can focus on partnerships with the private sector to produce technologies that help meet climate goals, like more resistant batteries, for example.

Biden had been asked for financial help not just by leaders of poorer nations, but even by presidents like Emmanuel Macron of France, who complained in Egypt that Europeans are the only ones paying for the crisis. “You have to put pressure on rich non-European countries,” he said.

This charge was also made by president-elect Luiz Inácio Lula da Silva (PT) at the COP, but it is an old demand from the Brazilian government.

During the Jair Bolsonaro (PL) administration, Ricardo Salles, then Minister of the Environment, met a few times with the special envoy for the climate, John Kerry (after Biden took office), asking for resources for Brazil to preserve the Amazon. The figures reached US$ 1 billion in 2021.

Negotiations never advanced because the US conditioned financial support to the presentation of concrete results by the Brazilian government, while the Bolsonaro administration asked to receive resources in advance. Now, with Lula, the expectation is that the dialogue between the two countries on the environmental issue will advance.

The good news is that the world’s two biggest polluters are back in conversation. The United States and China had stalled negotiations on the climate agenda in August, after the Speaker of the House, Nancy Pelosi, traveled to Taiwan – an island that has independence in practice, but which Beijing considers a rebel province and talks about reanexation.

Last Monday (14), however, Biden and Xi Jinping met in Bali, Indonesia, during the G20, easing tensions between the two superpowers, which marked the resumption of climate dialogue. Special climate envoy John Kerry and his Chinese counterpart Xie Zhenhua have already met, if only briefly, in Egypt.