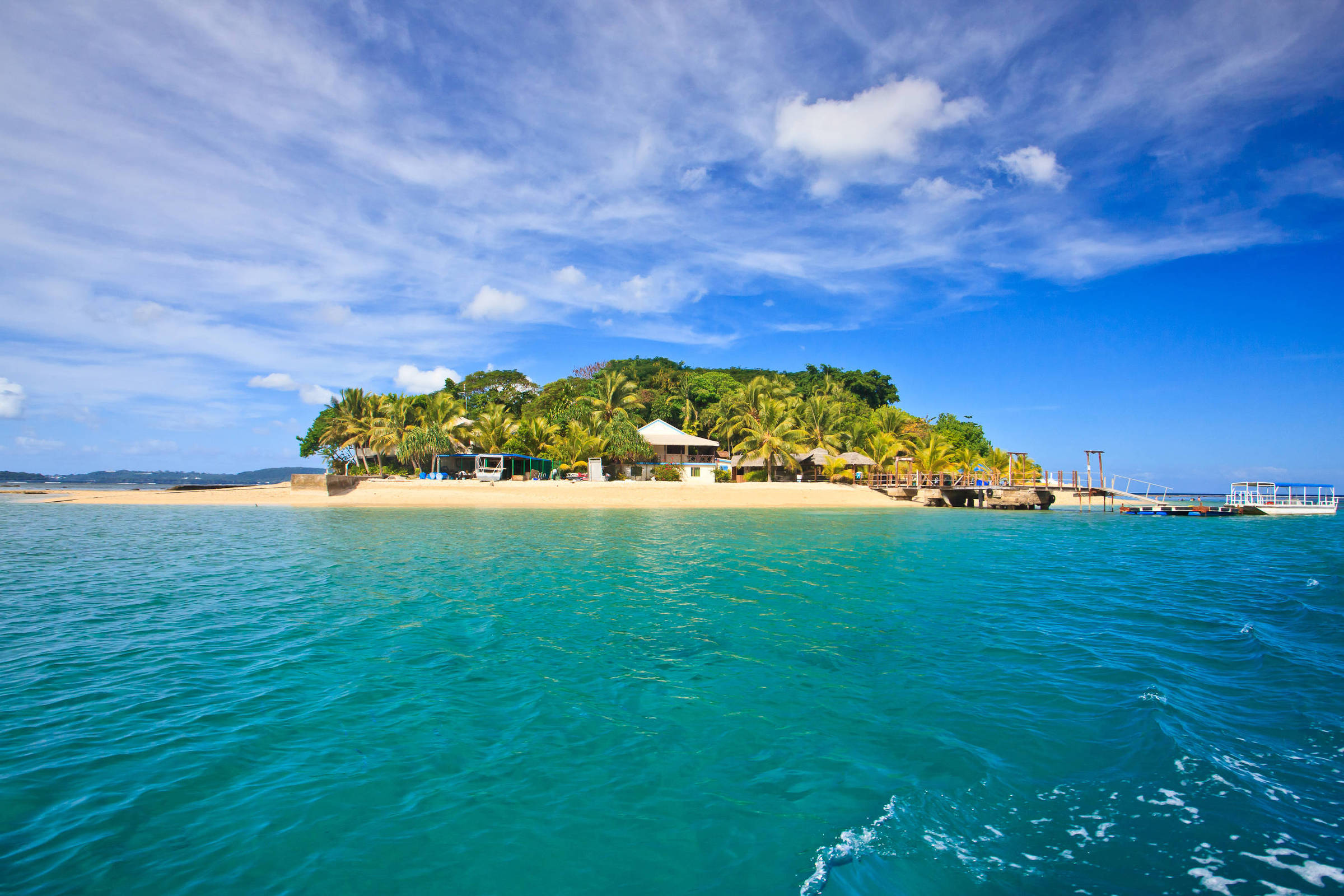 Nikenike Vurobaravu is the president of a small country that packs a punch in climate diplomacy.

Rising sea levels put the very existence of his country, the archipelago of Vanuatu in the Pacific Ocean, and its little more than 300,000 inhabitants at risk. For Vurobaravu, the greatest weapon that the country has to defend itself is raising its voice in a creative way in international diplomatic negotiations.

The idea emerged from Vanuatu in 1991 that industrialized countries should pay for the irreversible damage induced by climate change and suffered by developing countries such as Vanuatu itself.

At the United Nations climate conference, held last month in Egypt, an agreement was reached, after 30 years of negotiations, for the creation of a fund that will help poor countries to face climate change and damage.

Earlier this year, Vurobaravu used the pulpit of the UN General Assembly to, for the first time, call for a “non-proliferation treaty” on fossil fuels.

Now he is making the most provocative suggestion Vanuatu has ever made. Vurobaravu wants the International Court of Justice, the world’s highest judicial body based in The Hague, to give its opinion on whether governments have legal obligations to protect people from climate hazards, and, more crucially, whether failing to meet these obligations can lead to “legal consequences” under existing international law. In other words, Vanuatu wants the ICJ to say whether countries can be sued for climate inaction.

“People think outside the box,” said Vurobaravu, a soft-spoken man whose gray, downturned mustache gives him the appearance of a sad face emoji, although he is anything but. For him, Vanuatu is a small country that has historically been of little importance and that is why it has learned to innovate.

“If we tried to go on to do things like other countries, I don’t think we would have gotten very far,” he said.

The draft resolution was co-sponsored by 17 other countries, including at least one industrialized nation responsible for a large share of historic emissions: Germany. Neither the United States nor China has endorsed it.

Diplomacy may well be Vanuatu’s only defense. The country has no army and no valuable commodities, except tuna, which, as the ocean warms, is moving further and further away from the archipelago’s territorial waters.

The draft resolution submitted by the country, requesting a legal ruling from the International Court of Justice, was put up for discussion at the UN General Assembly in mid-November.

In the coming months, every word and comma must be negotiated, and the project could go to a vote in early 2023. To be approved, the resolution needs to receive the vote of a majority of the 193 member countries of the General Assembly. The votes of superpowers and small countries carry equal weight.

To understand the disproportionate role played by Vanuatu, one needs to know its unique history.

Inhabited by native Melanesian peoples since the 6th century BC, the islands were jointly ruled by Great Britain and France for nearly a hundred years. Europeans were drawn to Vanuatu’s sandalwood in the early 19th century, and later to its land and labor. Settlers created cotton farms and later coffee, bananas and coconuts.

Vanuatu gained its independence in 1980.

It was then that Vurobaravu, a lawyer by training, became a diplomat. He created his country’s diplomatic service.

In 1981, when Vanuatu held a seat in the General Assembly, American filmmaker and lawyer Robert Van Lierop, a friend of Vurobaravu, became Vanuatu’s first representative to the United Nations.

Vanuatu helped create the Alliance of Small Island States (AOSIS), which has since become an influential 39-nation bloc in global climate talks.

In 1991, when a UN climate convention was being negotiated, Van Lierop proposed the adoption of a “loss and damage” mechanism.

The idea of ​​seeking a legal ruling from the International Court of Justice was proposed four years ago by a group of law students, Vurobaravu said. At that time the capital of Vanuatu had been heavily hit by a Category 5 cyclone. Entire villages were flattened. Plantations were destroyed. The fact that only 11 people died was attributed to an early warning system.

Vurobaravu now has two grandchildren. “The impacts of climate change are getting worse all the time,” he said. “I look at my grandchildren and wonder what things are going to be like when they’re 20, when they’re 30?”

Today Category 4 and 5 cyclones are common in the country, and the cyclone season, between November and March, is also the planting season for Vanuatu subsistence farmers. The most recent major cyclone, in 2020, hit the island where Vurobaravu lives, Malo. Malo’s population depended on assistance to survive for nearly a year.

Six villages on four islands have already been relocated. Their drinking water turned saline, and the islands were no longer habitable. Cyclones and warmer ocean water have destroyed coral reefs and the fish on which many people survive. Cases of dengue and malaria have been increasing.

For all that, when law students suggested investigating whether existing international law could be used to protect future generations, Vurobaravu said, he couldn’t just dismiss the suggestion. Vurobaravu said that in Vanuatu society, elders have obligations.

Last month, Vurobaravu sat in a small room in a noisy and overcrowded convention center in Sharm el-Sheikh, Egypt, where the climate talks were taking place, and reflected on the demands of younger generations. He said he heard young people asking, “Why are you drunk on fossil fuels?”

The campaign for the ICJ’s legal opinion is complicated by geopolitical issues. A similar effort started more than a decade ago by two other Pacific island nations, the Marshall Islands and Palau, came to nothing, largely because of opposition from more powerful countries. (It is worth remembering that the US exercises authority over the defense and security of both countries and the US Army has a missile defense platform in the Marshall Islands.)

Vanuatu’s geopolitical relationships are different. China has been expanding its diplomatic influence in the Pacific, including with Vanuatu, which is introducing Chinese language classes in its schools. Australia is Vanuatu’s biggest trading partner, which is defended by Australia, New Zealand and France.

The country has its diplomatic eggs scattered in many baskets, and President Vurobaravu has said he is not worried about pressure from wealthy industrialized countries to abandon the campaign for international legal advice. “If they threaten us, will we stop? Will this campaign stop? I doubt it very much,” he said.

The draft resolution asks the ICJ to assess existing laws, such as cultural rights covenants and international maritime law, to consider whether they protect current and future generations from climate hazards. A few national courts have already reached verdicts favorable to the activists’ actions, based in part on international law.

“An ICJ decision could be the most authoritative statement about the obligations that international law imposes on countries to control their greenhouse gas emissions,” said Michael Gerrard, professor of law at Columbia Law School and involved in the previous effort by Palau and the Marshall Islands.

According to Vurobaravu, Vanuatu’s diplomatic strategy is shaped by the country’s history. France and Great Britain, rival powers, were never able to reach an agreement on most issues related to the governance of Vanuatu.

According to the president, Vanuatu was forced to create strategies to which larger and more powerful countries would have no reason to oppose. “We had to learn to manage our ‘nothingness.’ I know this sounds a little cheesy and funny, but our people have had to do this for 75 years. We still have to.”

Facebook
Twitter
Pinterest
WhatsApp
Previous article
Army to be activated in Britain for health system strikes – Soldiers to drive ambulances
Next article
Serres: EDE from the mayor for the deadly explosion at the Primary School