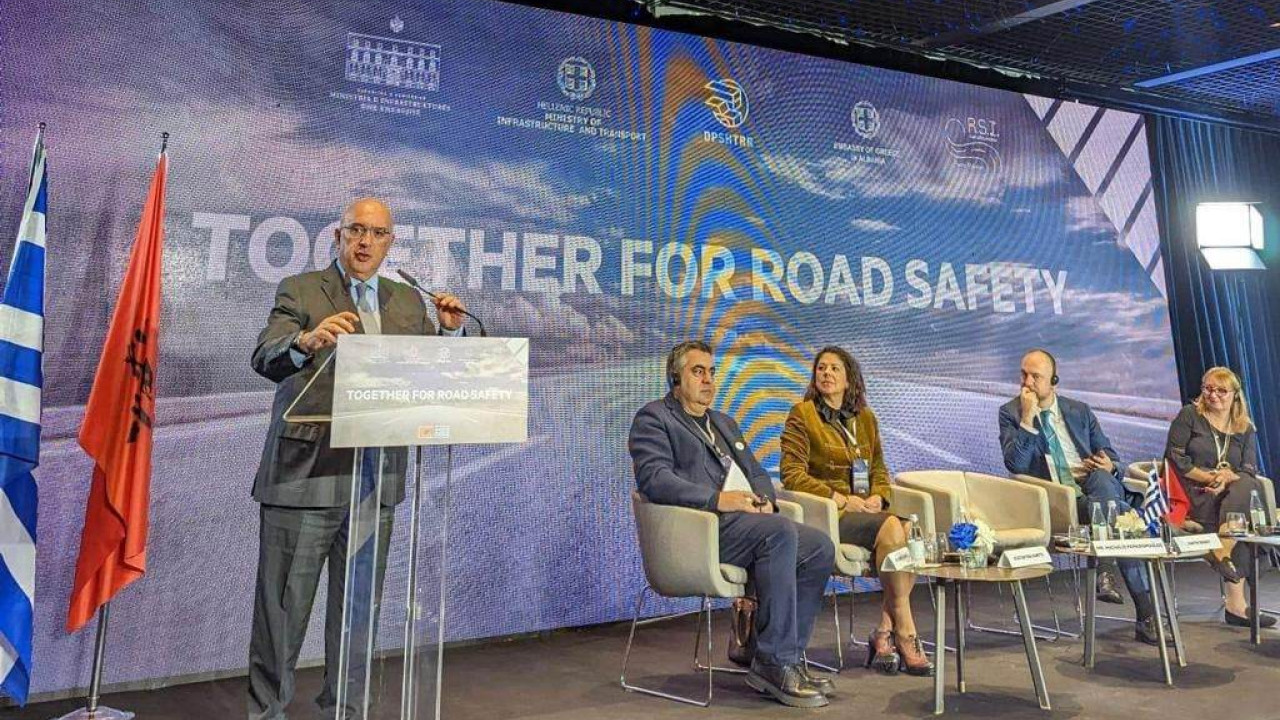 Bilateral Cooperation between Greece and Albania for Road Safety: What it includes

The visit of the Greek delegation to Albania, headed by Mr. Papadopoulos, took place at the invitation of the Albanian government through the Embassy of Greece in Tirana.

The bilateral cooperation between Greece and Albania in matters of Road Safety was inaugurated by the Deputy Minister of Infrastructure and Transport, responsible for Transport, Mr. Michalis Papadopoulos, on Monday, December 12, 2022 from Tirana.

The visit of the Greek delegation to Albania, headed by Mr. Papadopoulos, took place at the invitation of the Albanian government through the Embassy of Greece in Tirana.

The purpose of the bilateral meeting was the exchange of experiences and best practices, as well as the presentation of the strategy of the two countries in matters of road safety and training of citizens.

The Deputy Minister of Transport, during his introduction, presented the actions carried out by the Ministry of Infrastructure and Transport in the areas of Road Safety, Sustainable Urban Mobility and traffic rules for Historic Vehicles. He further specified the legislative initiatives that have already been instituted, as well as the planning that is currently underway, given that road safety is a priority of the government, Prime Minister Mr. Kyriakos Mitsotakis, as well as the political leadership of the Ministry of Infrastructure and Transport .

In particular, the Deputy Minister of Transport presented the main axes of the National Road Safety Strategic Plan for the decade 2021-2030, which was approved at the last meeting of the relevant Government Committee which he chairs.

“Important legislative initiatives have already been taken for Road Safety in Greece, such as the new law on the training and examinations of prospective drivers, which provides for the upgrading of the content of the training material and the use of technological means to ensure transparency in the theoretical and practice test.

At the same time, the framework of penalties in the Road Traffic Code is being reformed, emphasizing the dangerous offenses that are most responsible for deaths and serious injuries in road accidents.”

Mr. Papadopoulos reminded that in the theoretical exam for the marks, the educational material has been taught and examined in the Albanian language since 2007, in order to facilitate the Albanian citizens residing in our country. He also pointed out that the traffic conditions that prevail in the two neighboring countries, as well as the daily traffic of thousands of users between the road axes of Greece and Albania, constitute a condition that necessitates our cooperation and the provision of expertise in the field of Road Safety .

“The agreement on the mutual recognition of driving licenses, which is valid from 2020, is the basis for deepening our cooperation, recognizing the fact that too many individuals and professionals travel frequently from Greece to Albania and vice versa,” said Deputy Minister of Transport.

The Deputy Minister of Transport was accompanied by senior officials of the Ministry of Infrastructure and Transport who presented in detail the content of the institutional framework and the initiatives implemented in each sector, specializing in the technical details, the President of the Motor Sports Federation of Greece (OMAE) Mr. Dimitrios Michelakakis who spoke about the historic cars and the President of the Institute of Road Safety (I.O.A.S.) “Panos Mylonas” Mrs. Vassiliki Mylonas who presented the actions of the Institute.

In the bilateral meeting from the Albanian side, the Deputy Minister of Infrastructure and Energy, responsible for Transport, Mr. Hantin Bonati, the General Director of Road Transport of Albania, Mr. Blendi Gonxhja, and the Deputy Mayor of Tirana, Ms. Keti Luarasi, head of government agencies, transport institutes and transport industry representatives in Albania.

The Albanian Deputy Minister of Infrastructure and Energy, responsible for Transport, Mr. Hantin Bonati, thanked the Greek side for the immediate response to its request and considered the presence of the Greek Deputy Minister in Tirana particularly important for a matter of utmost importance that concerns the daily life of citizens .

The event was attended by heads of government agencies, transport institutes and transport industry representatives in Albania.

Particularly useful for the organization of the synergy was the contribution of the Greek embassy in Albania and personally of the ambassador Ms. Konstantinas Kamitsi.

The cooperation in Road Safety issues can create synergies and opportunities for the future transfer of know-how from our country to Albania.

Facebook
Twitter
Pinterest
WhatsApp
Previous article
Sakellaropoulou from Kalavryta: “We do not forget and we do not become complacent”
Next article
Serres: Injured police officer from Roma attack – A chase followed