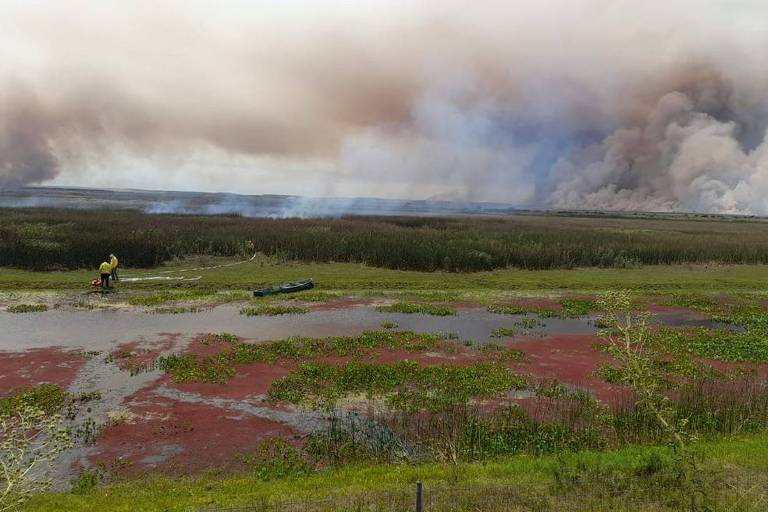 After three days of fire, almost 8% of the total area of ​​the Ecological Station of Taim, in Rio Grande do Sul, was destroyed until this Thursday (15). The conservation unit has a total of 32,806 hectares, of which 2,532 were consumed by the flames.

The cause of the fire, according to ICMBio (Chico Mendes Institute for Biodiversity Conservation), was a lightning strike last Monday (12), near BR-471, which connects the state to Uruguay, in the city of Santa Palm victory.

Due to the direction of the winds, the highway was not affected and did not need to be closed.

According to ICMBio, the winds are turning northeast and there is another line of fire, 10 kilometers long, which reaches the east bank of the swamp and extends, diagonally, to the other bank.

“As this is a wetland area, the fire is fought on the flanks, with the aim of not entering neighboring properties”, says the agency.

The autarchy claims that the fire is reaching the dry part of the vegetation and should not reach the roots, which are protected by the humidity still existing in the soil, which will help a quick recovery of the plants. “ICMBio also found that there are refuge ‘islands’ for fauna.”

The Taim Conservation Unit suffered a fire of similar proportions in February 2013, also caused by lightning, when 5,731 hectares of vegetation were destroyed by fire, partly in regions outside the perimeter of the station.

At the time, brigade members and planes worked for a week to control the flames, intensified by the winds and the difficulty in accessing wetland areas. Five years ago, another fire hit an even larger area of ​​the same reserve.

The station, located in the municipalities of Santa Vitória do Palmar and Rio Grande, is home to species such as the broad-snouted caiman and the black-necked swan. It is also a place of passage for migratory birds.

Created in 1986, it is one of the most important conservation areas of the country’s Atlantic Forest, preserving swamps and lakes, fields, dunes and woods and sheltering a great diversity of endangered plant and animal species.