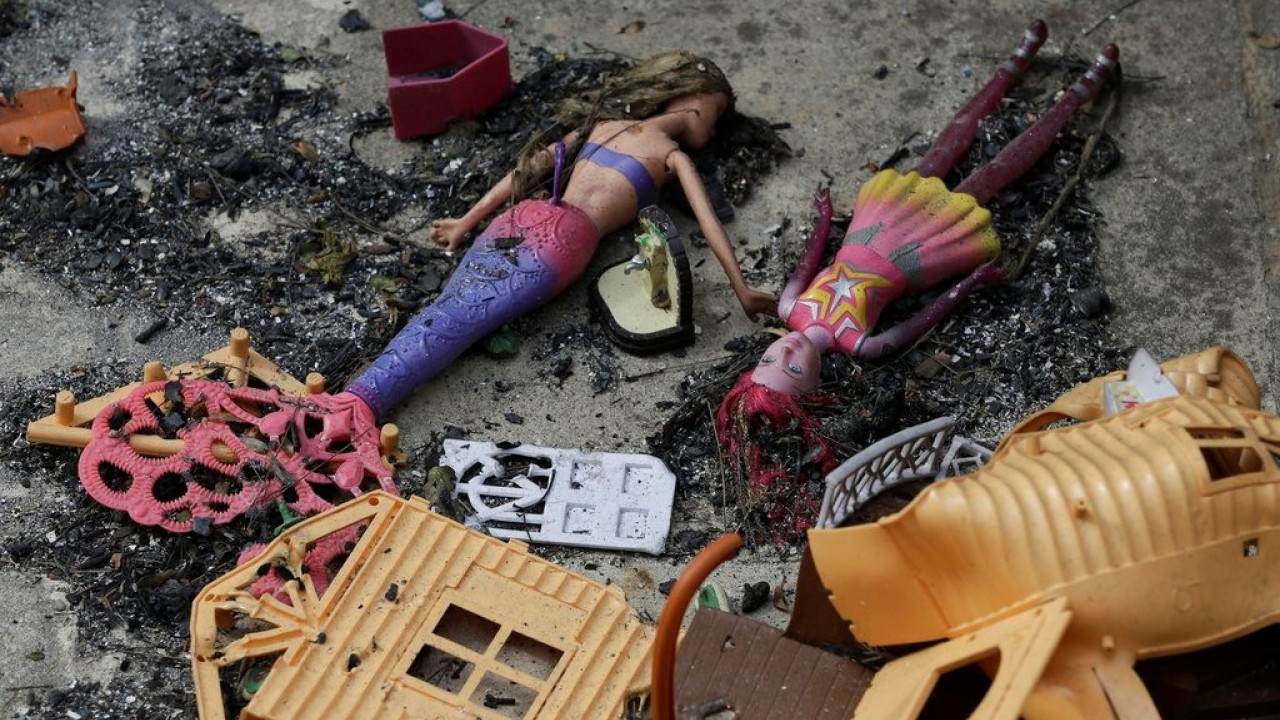 “I realized that my baby hadn’t made it…”: The firefighter who lost his child and wife in Mati was shocked

Relatives of 6-month-old baby arrive at court holding white rose – If there’s hell, this is what it should be, another witness said

With black flags on the railings of the Court of Appeal, outside the room where the trial for the tragedy in Mati is being held, the proceedings continue before the Three-member Criminal Court which today heard one of the most tragic stories that marked July 23, 2018, when the fire swept people and property.

The fireman took the witness stand Andreas Dimitriou that the fire in his Eye deprived him of his six-month-old baby and a few days later his wife. Relatives of the infant arrived in court holding a white rose.

Mr. Dimitriou described in court that on that day he was notified to go to the fire in Kineta. From there he learned that a fire broke out in Eastern Attica. From phone calls with local residents, “I understood that things were not good,” said the witness.

As the firefighter mentioned, he received, around 7 pm, a call from his service to go with his personal car to the area, because there was no service car, to help people leave their homes.

“I was trying to contact Margarita. He was in a panic. I thought they had found safe haven on the beach with the child. I get a call from my father-in-law ‘be prepared that things are not good’. I arrived and saw the little one with a stranger trying to give first aid. My wife was sitting on the beach. He was with his eyes closed. At that moment I hugged her. I spotted a fire truck and told them to take the little guy along with the gentleman who was doing CPR.”

A devastated Mr. Dimitriou said that when they took the baby to the Children’s Hospital, “I understood from the doctors’ tone that my little boy had not made it… They told me that it was not possible to save him. There I said my last goodbye to him. Then I had to go to Margarita which I didn’t know was so serious. Arriving at the hospital I find that he has been intubated and is serious. I struggled to recognize her. Her whole face was burnt. Like seeing another person. I saw her five minutes a day until she left…”

Ms. Dimitra Gounaridis testified that those who escaped the fire “came out alive-dead”.

The witness emphasized that no one warned about the approaching fire, so she was sure that they were not in danger. However, a friend of hers warned her to pack her things and be ready. Around 6:30 p.m., she said, her friend rang her doorbell to tell her to leave. He told her that it was “making a mess” and that there was a big traffic jam.

“Cars were coming from all directions. We ran to the sea. The heat wave at that time made me feel like I was going to die… 40 meters from the sea. We entered the sea. There was a war going on. We could hear cars screeching. Explosions. May the shop on the Silver Coast have explosions, may wood fall into the sea, may tents fall into the sea, and may we come and go without getting burned. We came out dead – alive. We took off the blouses and made them a mask. I will never forget the screams of the burnt people. Children were screaming, dogs were crying. I stayed at sea for six hours. Next to me was Margarita with her newborn baby (the wife and infant of Mr. Dimitriou). She was burned, the baby was also burned. She nursed it to keep it alive. A woman did not have the strength to get out of the sea. We went to help her and we were left with her flesh in our hands…”

As the witness said, when she arrived at the port of Rafina, her name as a survivor was “written on a newspaper” while they “didn’t have a blanket to give to the victims of the unimaginable tragedy”.

In his testimony, Mr. Ioannis Hardaloupas, a resident of America, said about the loss of his mother and sister: “Nobody understood the seriousness of the situation… At one point we were in the yard and a police car passed by and told us to leave. We went to get the cars. My sister got into the same car as my mother and I was following in the second car… The road to Marathon Avenue was inaccessible because of the flames… If there is a hell, this is how it should be,” said Mr. Hardaloupas.

The witness described how the car carrying his mother and sister was engulfed in flames. “I put them in my own car, they were burnt. I went out to Marathon and went to the health center in Nea Makri. I met a police block and they told me that you will go through the Eye. I thought they knew something. As soon as I entered Mati I realized that if I didn’t take the situation into my own hands we would all burn… I entered the opposite current at high speed… We reached Maroussi they were hosed down. I lost them both.”

The witness Angelos Siapkaras testified that his daughter, who was in the burning area for a day, was burned “140 meters from the sea”. The witness described how “on the day of the fire, my daughter woke up my son-in-law from the smoke. They decided to leave. My son-in-law took their child and ran towards the sea. My daughter was burned… One hundred and forty steps were mine. the sea and by the time they left the house was on fire. I can’t understand how it happened that my daughter burned in a house by the sea. If someone had notified them sooner as they should have, my daughter and so many others would have been saved.”

As Mr. Siapkaras testified, his daughter’s child is very shaken and remembers his mom. “Now at the holidays, my grandfather told me to go sing carols to mom. And we went over her grave to sing carols. We wake up and sleep with it,” said the emotional witness.

Facebook
Twitter
Pinterest
WhatsApp
Previous article
Municipality of Athens: The Open City with the logic “no to everything” undermines vital functions of the Municipality
Next article
Study links hearing loss to increased risk of developing dementia in older adults