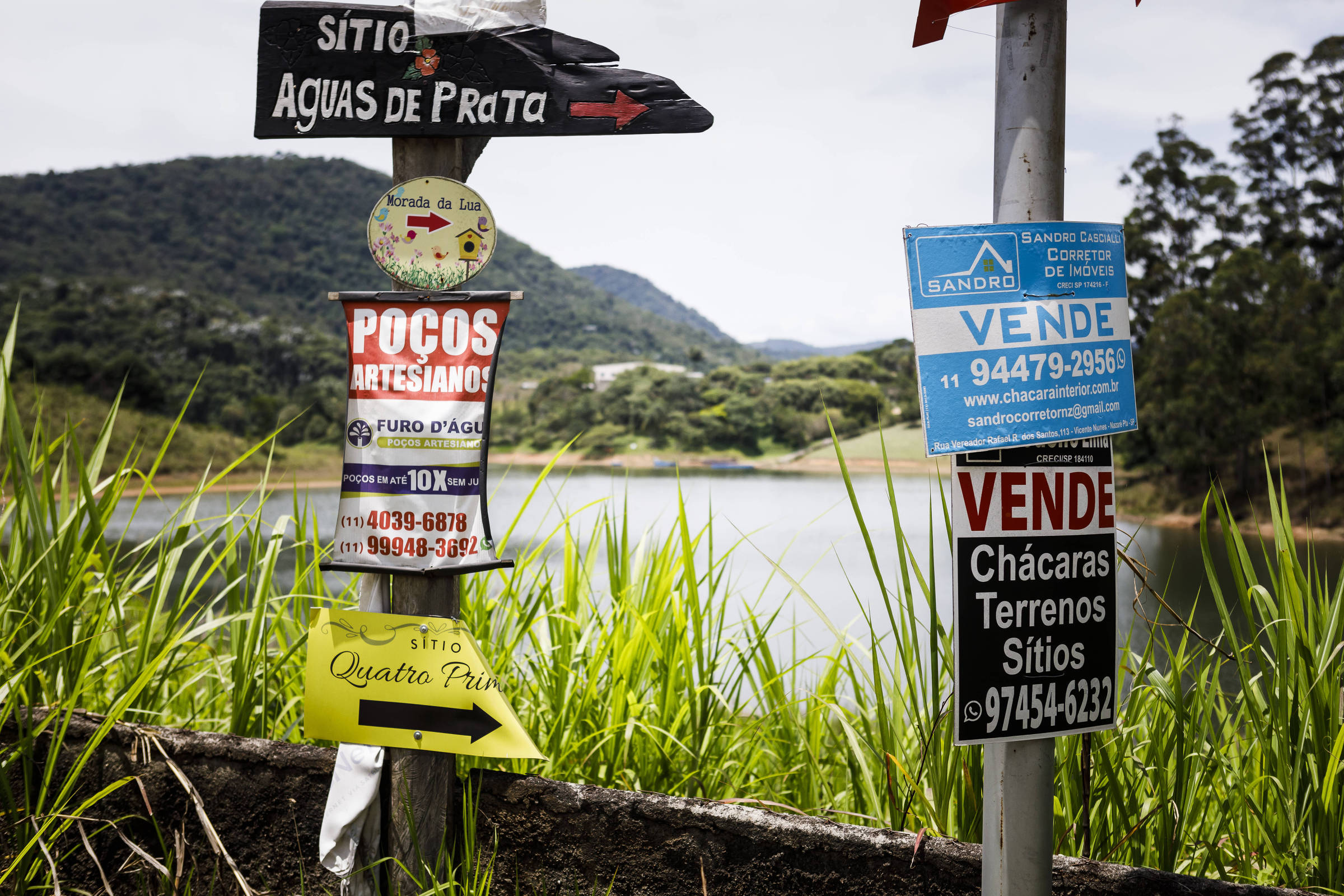 In almost all the streets of Nazaré Paulista, about 70 km from São Paulo, it is possible to see poles and railings with signs for the purchase and sale of farms, land and sites. The advertisements are accompanied by others that offer legal support to regularize land.

In the region, working on the land is a daily choice against the money from the sale of sites, a demand led by the real estate sector, which sees an opportunity for condominiums in the search for a life in the countryside. For those who decide to stay, protecting the vegetation is an even more delicate task.

Nazaré Paulista is on the banks of Atibainha, a dam that integrates the Cantareira system together with the Jaguari, Jacareí, Cachoeira and Paiva Castro reservoirs. The set is responsible for supplying 7.2 million people in Greater São Paulo.

Of the 230,000 hectares of forest in the system, 100,000 are degraded pastures. Small properties predominate in the region, and convincing families to replace conventional practices with ecological ones is a challenge.

“We are restoring on one side, and on the other side the owner releases the animals”, says forestry engineer Gustavo Brichi.

He is one of the technicians at IPÊ – Instituto de Pesquisas Ecológicas, an organization that works with the Semeando Água project in the ecological restoration of vegetation and raising the awareness of producers in the region of Nazaré Paulista.

“The level of the dam dropped, and the animals pass over the edge and stay there on the other side or access it through the road. You can clearly see the cultivation lines, but only a few species survived, because the animals constantly beat the earth”, he says.

The idea of ​​sowing water comes from the restoration of riparian forests, which increase soil infiltration and help regulate the recharge of reservoirs, “seeding” water throughout the year.

The area indicated by the engineer, on one of the banks of Atibainha, displays a landscape that is repeated in the region: remnants of the Atlantic forest, cattle, shacks, shacks, mansions and marinas.

In addition to irregular occupations, ecological restoration –capable of creating a dynamic of plant and animal species– faces a production chain linked to traditional models. But those who decide to change practices have the support of the institute’s technicians to combine business with restoration.

This change was the only way out for Eloisa Pinheiros, 31, who runs the Primavera farm with her husband, Israel Júnior, 30.

The land was acquired by his grandfather in 1950, and the family grew sweet potatoes, corn, peppers and tomatoes. Born in Nazaré Paulista, Eloisa studied at the state school Clélia Barros, in the city, graduated in finance in 2013 and began her career in the market.

In 2017, he left the office and returned to Nazaré, dedicating himself with Israel to growing flowers. The conventional model, however, with the use of pesticides to fertilize and protect plants from pests, has become saturated.

“It was three tons every 30 days”, says Israel. “With the very high flower production, there were a lot of pests and diseases, and nothing worked. There came a time when we started to lose and then we looked for alternatives”.

Today, the couple fertilizes the soil with efficient microorganisms, also called EMs, uses organic matter from weeding and manages pests with a diverse environment that balances the species.

Efficient microorganisms can be obtained from fungi that grow in cooked and stored rice, and according to Eloisa and Israel, they are used in smaller quantities.

The change in production, despite being bold, yielded results, filling the order schedule until November of next year and has drawn the attention of neighbors. “Someone comes here who follows up every week, has already asked about the compounds and now we recommend the EMs for him”, says Júnior.

Despite not being the initial motivation, the alternatives for dealing with climate change and the risk of water scarcity were incorporated into the daily work. “People say that there is no planet ‘B’. It’s now or never”, says Eloisa. She and Israel want to launch themselves as the first agroforestry system that produces flowers in Brazil.

On another property, engineer Eduardo Souza, known as Duduka, 60, turned the land he bought in the 1990s into an inn to supplement his retirement income.

After seeing the springs inside his property dry up over the years, he approached IPÊ and started participating in Semeando Água.

“Within the project we are going to map the area to plant coffee, divide where the products can be grown and where they can be restored. We are analyzing the creation of mushrooms native to the region, in a study by the institute”, he says,

Duduka’s wife, Silvana Rodrigues, 48, runs the inn’s restaurant and the recipe for drowned meat, which combines stewed meat with potatoes, farofa and rice.

“It’s a dish served mainly on São Gonçalo festivities, here in Nazaré, and on the Divine festivities, in June.”

Passed down through generations, the recipe adds tradition to the restaurant’s menu, which is expected to feature dishes with organic ingredients produced by other partners in the region —an articulation that is also part of Semeando Água.

Remodeling businesses and combining preservation with income is the keynote of the project, which last year renewed its third contract with Petrobras, the main financier, until 2024, with R$ 4.91 million in investment by the company.

“The main objective of the project was to increase the resilience of the Cantareira System with a sensitive point which is the water supply in the most densely populated region of Brazil”, says Gregório Maciel, the oil company’s social responsibility manager.

“It was a project that would start with restoration, and it was continually improved to identify the causes of deforestation in the area that would later be restored. That’s where the support for families and farmers comes in to fix them on the land, or the area could be sold”, affirm.

According to the coordinator of Semeando Água, Alexandre Uezu, the main challenge is to gain scale, because there is a race for land in the region.

“Especially in the water issue, we need to have this gain relatively quickly, precisely because of real estate speculation. For that, we need the engagement of landlords and institutions that operate in the region”, he says.

More than the increase in investments, according to Alexandre and Gregório, the success of restoration in Cantareira depends on the choices made by the population, public bodies and civil society.

Facebook
Twitter
Pinterest
WhatsApp
Previous article
He beat United in the 90′ ​​and took the game with soul… the amazing Arsenal are champions!
Next article
CNN: Kyiv Prepares for Heavy Fighting in Spring – Why Getting Leopard 2 Matters