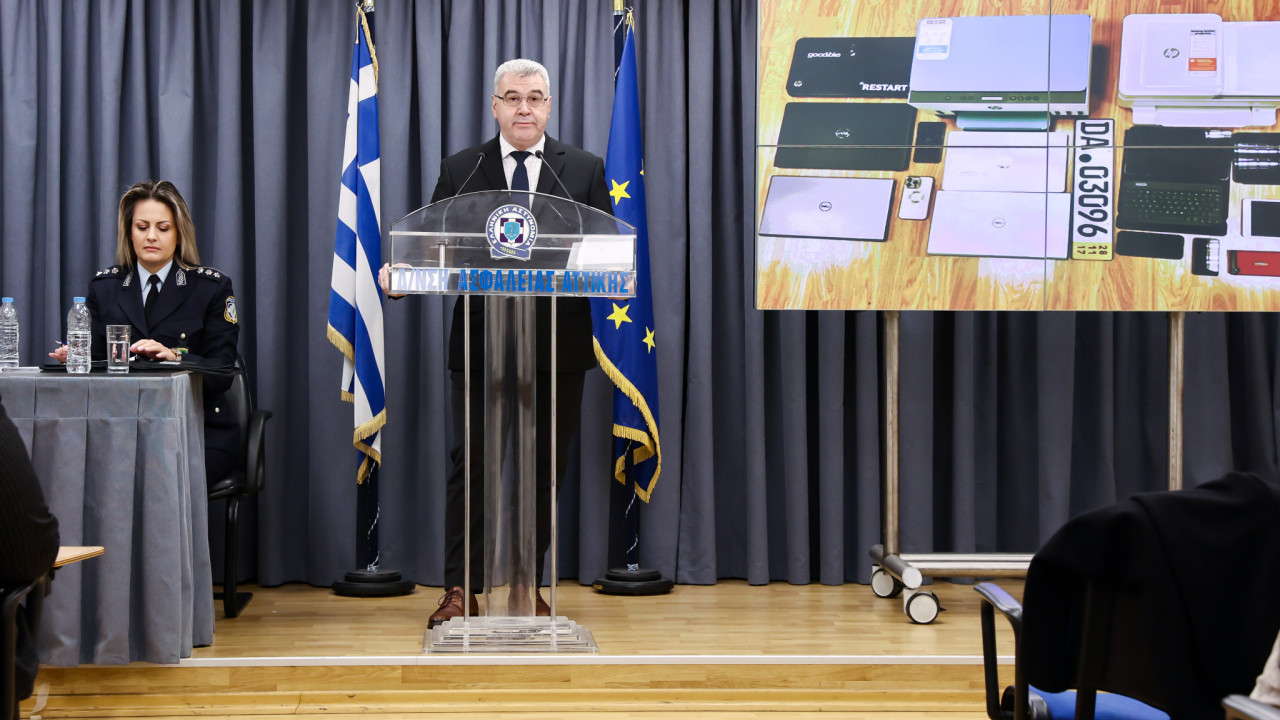 This is how “Maximos Sarafis” of Novartis set up the fraud: The non-existent company in the Emirates, the electronic storefront and the loot of 800,000 euros

How the criminal organization operated, with the alleged leader of the former executive of the pharmaceutical industry Filistora Destebasidis – The gang has been active for two years – How it deceived and reassured its victims

Through a shell company in the United Arab Emirates ordered loans for business activities to his business-victims o “Maximos Sarafis”– a protected witness in the Novartis case – who was arrested along with two other accomplices on fraud charges. Former Novartis business executive and communications director Philistor Destepbasidis, as his real name is, is alleged to be the leader of the criminal organization dismantled by the Police. According to the Police, Destepabasidis and his accomplices had started their criminal activity for at least two years, targeting business people who, after the financial crisis, could not secure loans from Greek banks. The organization “brokered” with the compensation for alleged direct lending from Emirati banks. In fact, they presented a brokerage company in the Emirates, with the name Zahrat-commercial, which existed only on paper, and Destepabasidis, who had a wide range of acquaintances due to his previous professional career, appeared as the representative of the non-existent company in Greece.

According to what was made known by ELAS, the other two arrested appeared as associates of “Sarafi”, even pretending to be the authorities in financial matters for the Emirates – one said that he had lived there for years or that his wife worked for the non-existent company and acted as the mediator to solve any problem that might arise. The defendants falsified documents, while in their possession were found seals of Greek companies and persons, logos and signatures of business executives and other documents and objects documenting the charge against them. It is noted that Destebasidis appeared to the victims of the gang with his real identity.

Four other people are accused of participating in the organization, including the three foreigners – who appeared as executives of the non-existent company with the name Zahrat-commercial, while the fourth managed the bank accounts where the victims’ money ended up, which they paid as a commission against the loans that would be “unfrozen”.

The fraud was set up to the last detail: The defendants had even developed a cover-up mechanism, in case any of the victims suspected something, with the aim of at least gaining time. In this logic, they had set up websites, e-mails of supposed executives of the non-existent company, “loan insurance” companies in the Emirates, fake certificates. The fraud was so well organized that some of the victims, when informed of the group’s activities by the police, did not believe they had fallen victim to fraudsters. Already, seven cases of cheating have been solved with spoils of around 800,000 euros. According to the police, for loans of 15 million euros the gang received a commission of 100,000 euros.

According to the police, at first they did not know from security that Destebasidis is a protected witness. However, the investigations did not stop when they found out, they proceeded normally. He denied the accusations and in his pre-investigation apology said that if there is fraud, he is also a victim.

Here are the announcements made earlier today by the Police:

Statements regarding the dismantling of a criminal organization, the members of which committed fraud and forgery against businessmen under the guise of mediation for the disbursement of loans

Statements of the Director of the Attica Security Directorate, Brigadier General Dimitrios Davalos:

Today’s presentation concerns the dismantling of a criminal organization, the members of which committed fraud and forgery against businessmen under the guise of intermediation for the disbursement of loans from a non-existent, as it turned out, financial company allegedly based in the United Arab Emirates.

In order to deconstruct the organization, a coordinated police operation was carried out yesterday (Tuesday, January 24, 2023) by the Property Rights Protection Department of the Attica Security Directorate, in the context of which three citizens, members of the organization, were arrested, including the chief .

This is an organization that has been operating for at least the last two years with a particular method and organization and aimed at “business people”. Its members appeared as their “saviors” from the difficult economic international conditions, which had destroyed their creditworthiness and, consequently, their ability to be financed by domestic financial institutions.

In particular, they were looking for entrepreneurs who wished to receive a loan, but did not have the lending guarantees from the domestic financial institutions. They therefore proposed as an alternative their direct lending from banking institutions of the United Arab Emirates or through the mediation of the non-existent company, for which they presented to their victims imaginary cases of successful lending to other Greek companies.

In fact, in order to be completely believable, they had developed a multi-layered mechanism, which acted as a deterrent in the event of their illegal activity being discovered, as in each case they activated a different “tool”, which reassured the challenger and provided the organization with time credit.

The profit from the aforementioned criminal activity came mainly from the collection, from the victims, of the fee of the leading member, as the direct representative of the non-existent company in our country, as well as the money “required” for the insurance of the supposed loan and the consequent taxes to the “Tax Authority of the United Arab Emirates”.

From the investigation so far, seven (7) cases of fraud have been discovered, from which the members of the criminal organization obtained approximately 800,000 euros, while the threatened loss exceeds 1,000,000 euros.

At this point I would like to congratulate the officers of the Property Rights Protection Department for the months-long, methodical and meticulous investigation they carried out, which admittedly had a great degree of difficulty in the pre-investigative stage of gathering information from the United Arab Emirates as well as for its successful completion with yesterday’s business.

More details will be presented to you by the Press Spokesperson of the Hellenic Police, Constable II Demoglidou Constantia.

As Mr. Governor mentioned, a criminal organization was dismantled by the Property Rights Protection Department of the Attica Security Directorate, whose members were defrauding businessmen under the guise of mediation for the disbursement of loans.

Against the three (3) members of the organization, who were arrested, as well as against four (4) more people, a criminal case was filed, for criminal organization, money laundering, fraud and forgery committed and attempted conspiracy and repeatedly.

As it emerged from the investigation, the above, having co-decided to commit misdemeanors and felonies, united and formed a criminal organization with continuous, structured and distinct roles and, with the aim of obtaining illegal income, for more than two years, committed criminal frauds and forgeries in burden of businessmen.

In more detail, a leading role in the action of the criminal organization was held by an arrested member with a long professional career, as a consultant for business, marketing, investments, etc.

Through the breadth of his social and professional circle, he sought prospective borrowers, usually business owners, who did not have the lending guarantees of domestic financial institutions. Then, taking advantage of their dire financial situation or their need for immediate business development, he presented as an alternative solution their lending directly from banking institutions of the United Arab Emirates or through the mediation of the non-existent company, of which he appeared as a representative in our country.

The other two arrested appeared as associates of the leading member and as knowledgeable about the special conditions of financial transactions in the United Arab Emirates and especially of the non-existent company. In fact, one of them, in order to strengthen the image of authority, claimed that he had lived in the country for a number of years or that his wife worked for the non-existent company in question, respectively, assuming the role of a mediator, ready to provide solutions to any problem that arose.

He also played an important role in the forgery of documents used by the criminal organization, as in his possession were found seals of companies and persons, a stamp matrix with removable digits-Greek and Latin characters, signature impressions, various prints of company logos and executive signatures, pieces of paper of company seals and signatures of their executives pasted on A4 stickers, etc.

Of the co-accused, three (3) foreigners appeared as executives of the non-existent company and reassured the victims in case of doubts about the validity of the process, while the fourth co-accused managed the bank accounts where the victims’ money ended up.

It is worth noting that, in addition to the non-existent company and in order to make the whole project seem even more plausible, the members of the organization had also set up insurance companies in the United Arab Emirates, into whose bank accounts the victims deposited the sums of money related to the loan costs.

The whole process took place following the instructions of the leading member and his accomplices, who in various phases of their criminal activity delivered to their victims forged documents, documents and certificates, with which they convinced them of the validity and legality of their activities.

From the searches carried out, among others, the following were found and seized:

500 euros,
five laptops, mobile phones, printer and tablet,
stamp plate/matrix consisting of detached numbers, Greek letters, punctuation and symbols,
hand stamps and stamp impression,
documents with designs of signatures and seals,
documents with affixed pieces of paper with signatures and seals,
printed emails,
documents related to the defunct company, handwritten notes and various contracts between natural or legal persons.
The arrested were taken to the competent prosecutor’s office, while investigations to ascertain the full extent of their criminal activity are ongoing.”