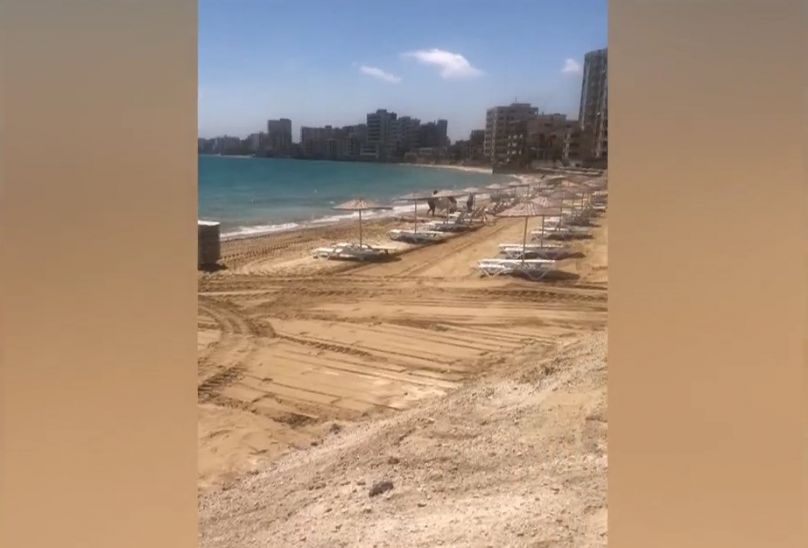 New challenge in Varosia: Expansion of the organized beach by the authorities of the pseudo-state

The pseudo-state proceeds to new provocative actions once again, in the enclosed one area of ​​Varosia. Actions that are in complete contradiction with the decisions and resolutions of the UN Security Council.

In the images that make the rounds of the internet bulldozers can be seen performing work in a central part of the enclosed area of ​​Varosia. This is the point in front of the hotel “King George” and up to the apartment building Oceania. Sunbeds with umbrellas have also been transferred there. It is noted that this point was accessible to the public, but not in the form of an organized beach.

At this point was the restaurant “Faliro” which the Turkish Cypriots demolished some time ago, after it was half demolished. It is assumed that this is an area of ​​about 600 meters.

It is recalled that the occupying authorities opened part of the fenced city of Famagusta in October 2020. On November 15 of the same year, Turkish President Tayyip Erdogan visited the beach of the Golden Coast, where everyone is allowed to enter. Two other beaches have been opened, one initially only for members of the occupying army and later the other for citizens of the pseudo-state and Turkey only.

At the same time, the President of the Republic of Cyprus, Nikos Anastasiadis, states in his statements that he will fight for the return of Famagusta to its legal inhabitants but also for a fair and sustainable solution to the Cyprus problem.

Facebook
Twitter
Pinterest
WhatsApp
Previous article
Opinion – Latinoamérica21: Half a century of relations between Argentina and China
Next article
Erdogan: I do not think of severing ties with Putin or Zelensky