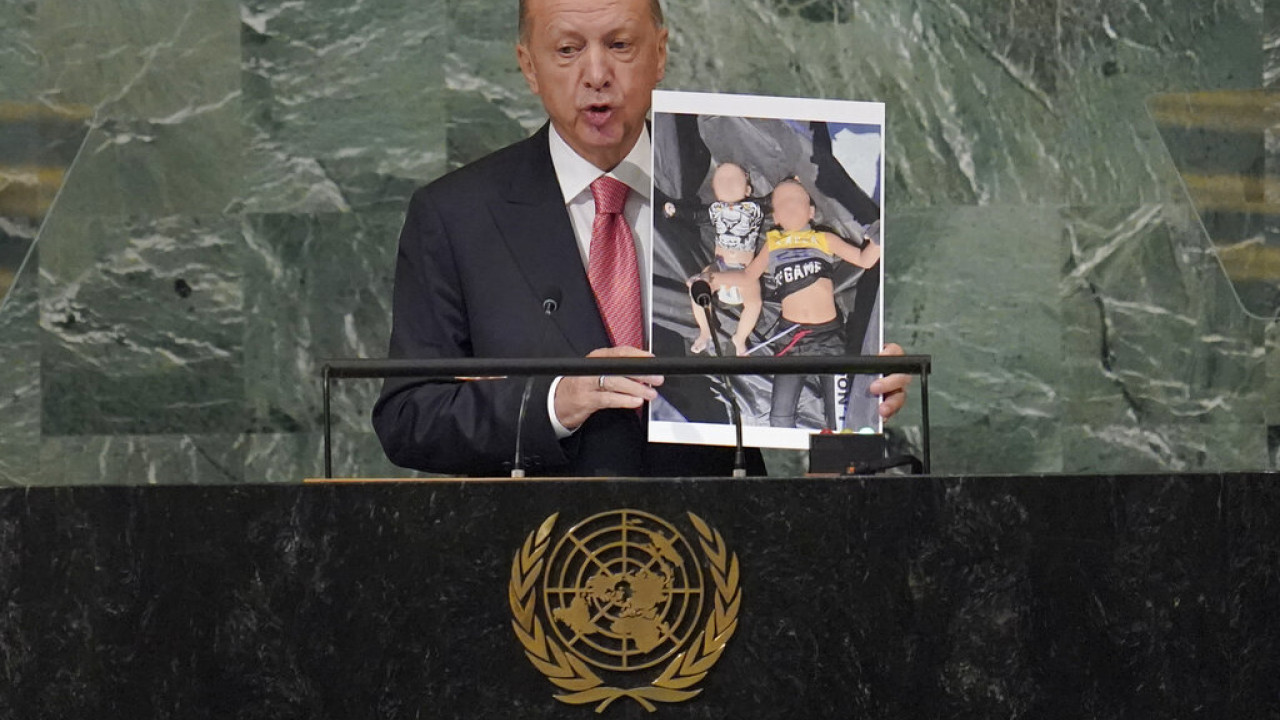 Some sources also speak of a surprise present in Mr. Mitsotakis’ speech, or of an “ace up the sleeve” of the Greek prime minister, regarding the Greek-Turkish language, but without giving more details.

His blatant lies and vulgar accusations are boomeranging back to Ankara Tayyip Erdogan against Greece as before “alector chanted three” from his speech against UN General Assemblythe facts themselves and Turkey’s sad history of violating human rights, resoundingly refute him.

Time began to count down for the Turkish President from the moment he decided not to respect the institution, nor the public who addressed and uttered his non-existent accusations, in the context of his now obsessive, anti-Greek propaganda.

A few hours after the “slanderous performance” he gave in New York, in Evros, another attempt by Turkey to use immigrants as a tool and “push” about 1,500 people to Greece and the EU, failed thanks to the armor and preparedness of our country.

Outside the field, Tayyip Erdoğan received a resounding “slap” from the EU, and from the same UN platform that spewed his lies, the union’s special representative for Human Rights Eamon Gilmore did not leave unanswered the “Erdogan” accusations of human rights violations, recalling the “policies of discrimination” applied by Turkey against the Greek minority, which resulted in “to be today on the verge of extinction”. An issue raised by Nikos Dendias from New York, responding to the Turkish President and calling on him to answer “what happened to the Greek minority in Istanbul and how the once thriving minority of over 100,000 people, today has been reduced to less than 5,000 or as it was once said, Turkey is not entitled to to speak,” the foreign minister had underlined.

In addition, another event, again instigated by Turkey, spoiled Tayyip Erdoğan’s narrative as just yesterday the 49 migrants found on a beach northeast of Leros were taken to the Leros Reception and Identification Center, when the inflatable boat in which they were on board was destroyed during their approach to the island. The rescued are 4 children, 18 women and 27 men and as they stated the boat that had started from Turkey and a total of 55 people were on board.

With the facts themselves disproving any non-existent Turkish claim, all eyes are now on tonight’s (22.15 Greek time) speech Kyriakou Mitsotakis at the UN General Assembly during which he is expected to present facts and evidence that prove the falsehood of what the Turkish President said on Tuesday and to unfold the entire propaganda strategy set up by Ankara. After all, the Greek side has in its hands as a weapon the very statements that the Turkish leadership has made from time to time and the map of the “Blue Homeland” that proves Turkey’s revisionism, without it having been decided yet whether it will show them from the podium United States. Some sources also talk about a surprise which is present in the speech of Mr. Mitsotakis, or for an “ace up the sleeve” of the Greek Prime Minister, regarding Greek-Turkish without giving more details.

Diplomatic sources, however, estimate that a step used by the Turkish president to set a trap in Greece, imprisoning her with blatant lies and slander, he is about to fall in himself, as events unfold.

In any case, Athens is still in alertness and readinesswhile skepticism remains regarding the targeting of Erdoğan’s statements, as well as the provocation that continues to escalate both at the level of rhetoric and in the field of violations in the Aegean, as this escalation can no longer be attributed only to his internal impasses Turkish president not even in creating impressions.

Facebook
Twitter
Pinterest
WhatsApp
Previous articleOSCE: Repression in Russia went to a new level – Intimidation is a key strategy of the Russian authorities
Next articleMayweather: “I want to fight McGregor in 2023”