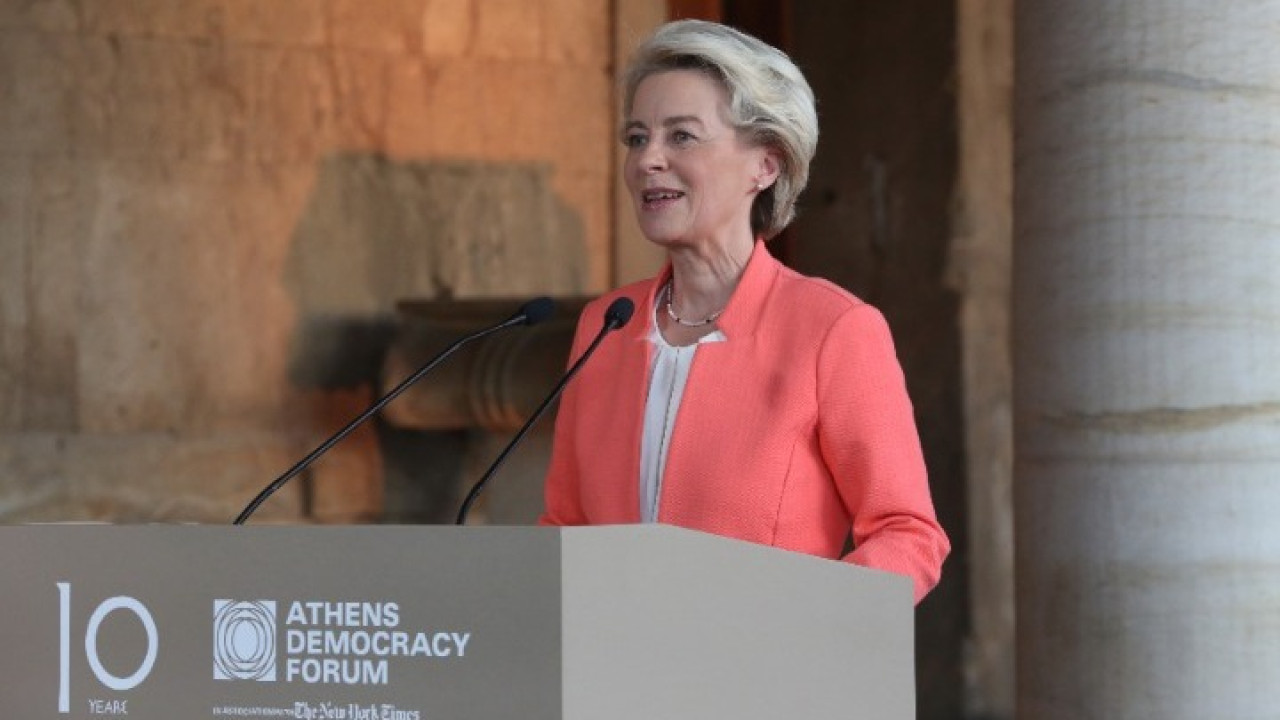 Ursula von der Leyen: “It is the duty of our generation to stand by Ukraine”

Starting her speech from the Naval Battle of Salamis, the President of the European Commission emphasized that the Greek Alliance defeated a much stronger enemy at Salamis. Authoritarianism lost and democracy prevailed, because the Greeks were fighting for their freedom.

“It is the duty of our generation to stand by Ukraine as it struggles to determine its future” and we will help it “politically, economically and militarily” because Ukrainians “have Europe in their hearts and minds”, said the president of European Commission, Ursula von der Leyen, in her speech at the 10th Athens Democracy Forum.

The president also called for the unity and determination of European citizens, saying: “We are all being tested today by Russia’s war against Ukraine, its blackmail on energy, but we must be determined and united. Each of us is part of the resistance and protection of our future.”

Starting her speech from the Naval Battle of Salamis, the President of the Commission emphasized that the Greek Alliance defeated a much stronger enemy at Salamis. Authoritarianism lost and democracy prevailed, because the Greeks were fighting for their freedom.

Making the comparison to today, he said that in the war declared by Russia against Ukraine, democracy will again win, adding however that “many in Europe have underestimated the threats inside and outside our borders”, because after 70 years of uninterrupted democracy and of peace in Europe, “many of us believed that we would continue in freedom and peaceful cooperation and took democracy for granted.”

Constantly returning to Athenian democracy, he noted that it should inspire us. “The idea that we are all equal before the law, the idea that freedom of speech is a fundamental right, is the immortal gift that Greece gave to the world.”

However, he pointed out the disadvantageous position of women in ancient Greece, who did not have the right to speak and vote and this “took thousands of years to be done”. Even today they are fighting for equal pay for equal work, equal responsibilities and equal rights, equal access to power, politics, entrepreneurship. “Democracy is always changing, it is not perfect, but it is being perfected.”

Brushing off objections to Ukraine’s EU candidacy because “its democracy is very young,” he said that in a few years it had made many reforms that had not been done for decades, and the same was true of the Western Balkan countries, as well as Georgia, who want to join us. “The wind of change is blowing across our continent.”

Ms von der Leyen also highlighted the weaknesses that still exist within the EU, saying that although “Europe was built on the promise of unity and diversity, racism and anti-Semitism have not been eradicated. Not all minorities are respected.”

He also made special mention of the lack of respect for the rule of law and the independence of the judiciary, as well as serious concerns about corruption. “All this is against our conditions and values ​​and democracy.”

The President of the Commission also referred to the “new threats”, such as disinformation, meddling in the elections, cyber attacks. We need to shield our values ​​better, he said.

Referring to the pandemic period, she stressed that our democracy in the EU proved to be far more effective than the authoritarian regimes of China and Russia, as it proceeded to create vaccines and administer them to all member countries large and small without delay, “because there is the freedom of science.”

“Democracy can succeed as long as we are united.” Freedom also extends to countries that have not known democracy because it inspires, he said and made reference to the millions of Iranian women who are fighting for their freedom, for respect and equality of their rights.

“The Union will stand by every country fighting for its freedom and every new democracy in Europe and elsewhere. This means that we will support Ukraine with political, economic and military means.”

Concluding her speech, she spoke about the future generations to which democracy belongs and which we must put at the center of our actions, such as in dealing with climate change.

“It’s up to us for democracy to prevail, it’s up to us to stay united,” he said in closing.