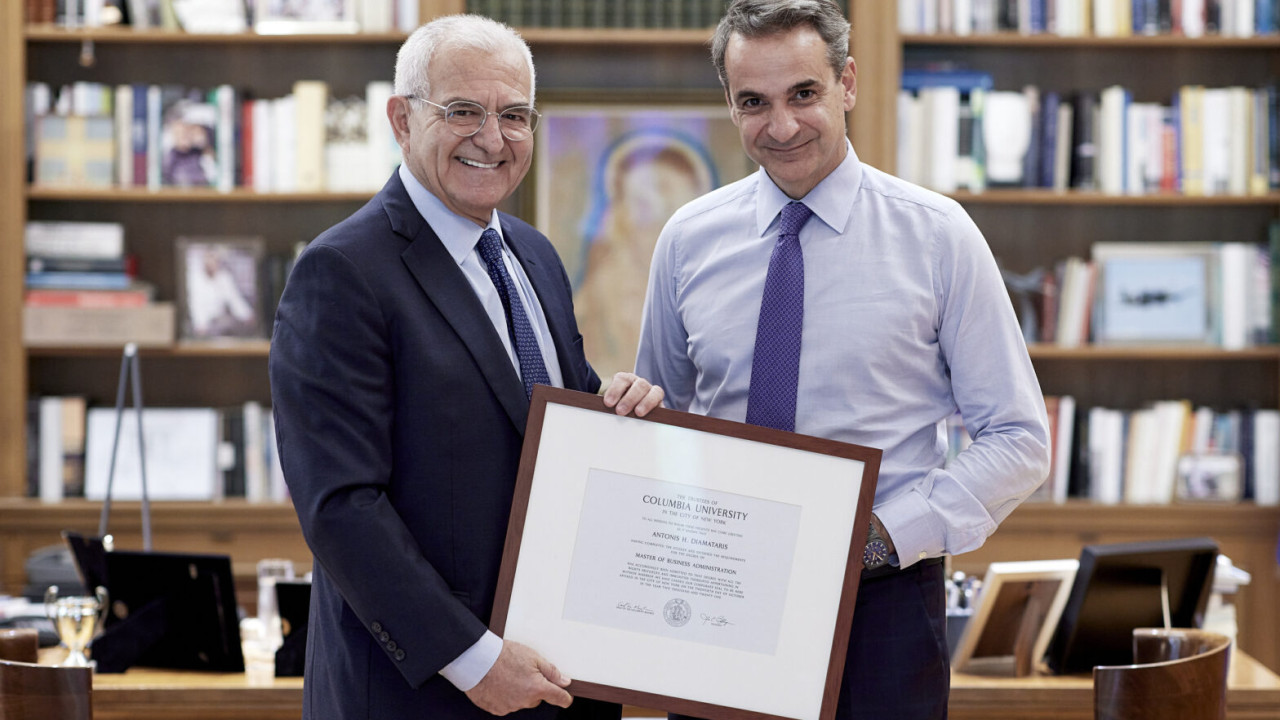 A. Diamataris presented a copy of his MBA degree from Columbia to K. Mitsotakis

Mr. Mitsotakis expressed his satisfaction, congratulated Mr. Diamataris and stated that he wants to contribute in the most official way to the restoration of the truth and the correction of the injustice committed against him with this meeting

Mr. Antonis Diamataris was received today, November 21, 2022, by the Prime Minister Kyriakos Mitsotakis in his office at Megaros Maximos, to whom he presented a hard copy of his degree, MBA, from Columbia University.

As is known, Mr. Diamataris had submitted his resignation from the position of Deputy Minister of Foreign Affairs in charge of Hellenism Abroad three years ago due to the issue created regarding his degree.

Mr. Mitsotakis expressed his satisfaction, congratulated Mr. Diamataris and stated that he wants to contribute with this meeting in the most official way to the restoration of the truth and the correction of the injustice committed against Mr. A. Diamataris by the official opposition, while at the same time he civilized the manner and methods used by SYRIZA.

Mr. A. Diamataris had been the target of a furious, coordinated attack by the official opposition and some media, that he allegedly did not study at Columbia, as stated in his biography on the website of the Ministry of Foreign Affairs, and that he did not even “pass outside of Columbia” , according to the statement of Mr. A. Tsipras.

After that, Mr. Diamataris felt compelled to submit his resignation for reasons of dignity, but also because he did not want to be the cause of attacks on Prime Minister from his political opponents.

The fact that it took him a while to receive his degree, this is due, as he has published on various occasions, to the following main reasons:

First, that more than 40 years had passed since he completed his studies in January 1977.

Secondly, that the University records of that time were not in electronic form.

Third, that it coincided with the beginning of the pandemic when everything in New York was down or closed.

And, fourthly, after the uproar that was created, the University duly scrutinized its case.

Thus, the degree was awarded to him on October 20, 2021. Of course, it was not possible to award him a pre-dated degree and have the date of awarding the degree in 1977, as well as the then president of the University and the dean of the School of Business Administration died long ago.

“I want to warmly thank the Prime Minister,” said Mr. Diamataris, “who, with his act and its symbolic nature, essentially contributes to the restoration of the truth and the correction of an injustice committed against me.

This act of the Prime Minister honors me. However, it goes far beyond me and the injustice I have suffered. With this meeting, Mr. Mitsotakis sends a strong message of optimism and hope to all those who, for whatever reason, are wronged. Thus, it was proved once again that in the end justice and truth win.”

Facebook
Twitter
Pinterest
WhatsApp
Previous article
Crete: The itinerant fisherman is guilty of the tragedy with the 7-year-old girl in Mesara
Next article
New question from Tsipras to Kyriakos Mitsotakis about surveillance