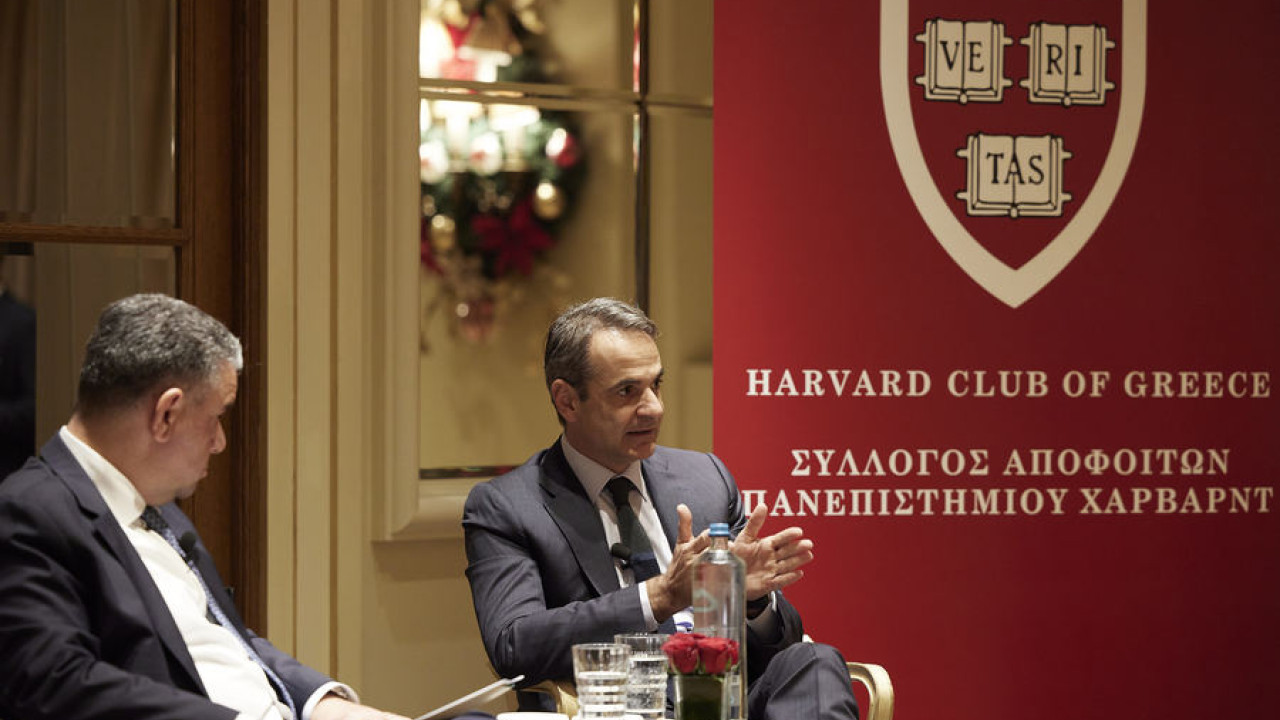 “There is a former prime minister and a current prime minister, the comparison is very clear,” said Kyriakos Mitsotakis about the elections, speaking to graduates of American universities

“I think it is now clear that the collective benefit of a bold course of reforms is what we are seeing: it is 6% growth, it is the de-escalation of unemployment, it is more investment, it is the gradual improvement of wages and it is also the surplus which this development creates, so that we can make a serious social policy”, noted Prime Minister Kyriakos Mitsotakis in a discussion with the director of the Boston Consulting Group, Vassilis Antoniadis, during an event of the Alumni Associations of Georgetown and Harvard Universities in Greece. He also underlined that there is no development without an increase in the standard of living for everyone and that the challenge is for this decade to be the decade of a great leap. Regarding the elections, he characterized the goal of self-reliance in the second ballot as absolutely possible.

“We now have tangible results and evidence that we were able to implement what we planned, even though we faced a series of very large external crises, which certainly made our lives more difficult. I believe that we were able to turn some of them into a substantial opportunity to run even faster ideas and plans that we had already launched”, added the Prime Minister.

He also pointed out that “for many it is a surprise that today the Greek economy is growing much faster than the European average. This is not only true for ’21 but also for ’22, it will be true for ’23. And I think the big challenge is to be able to keep this distance from the European average with a growth that will be sustainable, but will also have very specific quality characteristics”.

And he added: “these qualitative characteristics also hide my vision for Greece in 2030. That is, an extroverted, innovative, environmentally friendly and fair development. Righteous in the sense that in an age where the forces of populism are still present – we should understand that populism does not thrive in a vacuum – there are actually real concepts and real issues that concern large parts of society, which must essentially let’s deal with them”.

He also emphasized that for him “there is no development without an increase in the standard of living for everyone, I would especially say for the low-paid, because in our country wages are still low compared to the European average. This plan, therefore, today is much easier to explain to foreign investors, to mobilize funds from abroad as well as domestically, because growth must be fueled primarily by investments. We had a huge investment gap in the country, it got worse during the crisis years and we have to bridge it and we are moving in that direction and we have to run even faster to be able to do it.”

Referring to the long-term goals for Greece, after a ten-year crisis, the prime minister noted: “The challenge is for this decade to be the decade of a great leap. And to really be able to see ahead of other countries, not how Greece will be, but how the world will be. Because if we don’t understand what the world will be like, we can’t easily place Greece in this changing world.” “The Greece of 2030 must be a Greece that when we go back 10 years we will say “we could”. I think we have made a start, but we still have many steps to go. There are countries that have made such leaps,” he added.

Answering a question about the national elections, Kyriakos Mitsotakis said: “I consider that the goal of self-reliance in the second ballot is absolutely possible. There is an issue at the moment: who can manage the future of the country in conditions of major crises. And since we now have four years of New Democracy and they are compared to the four years of SYRIZA – because this is our main contender – and there are two people, a former prime minister and a current prime minister, the comparison is very clear”.