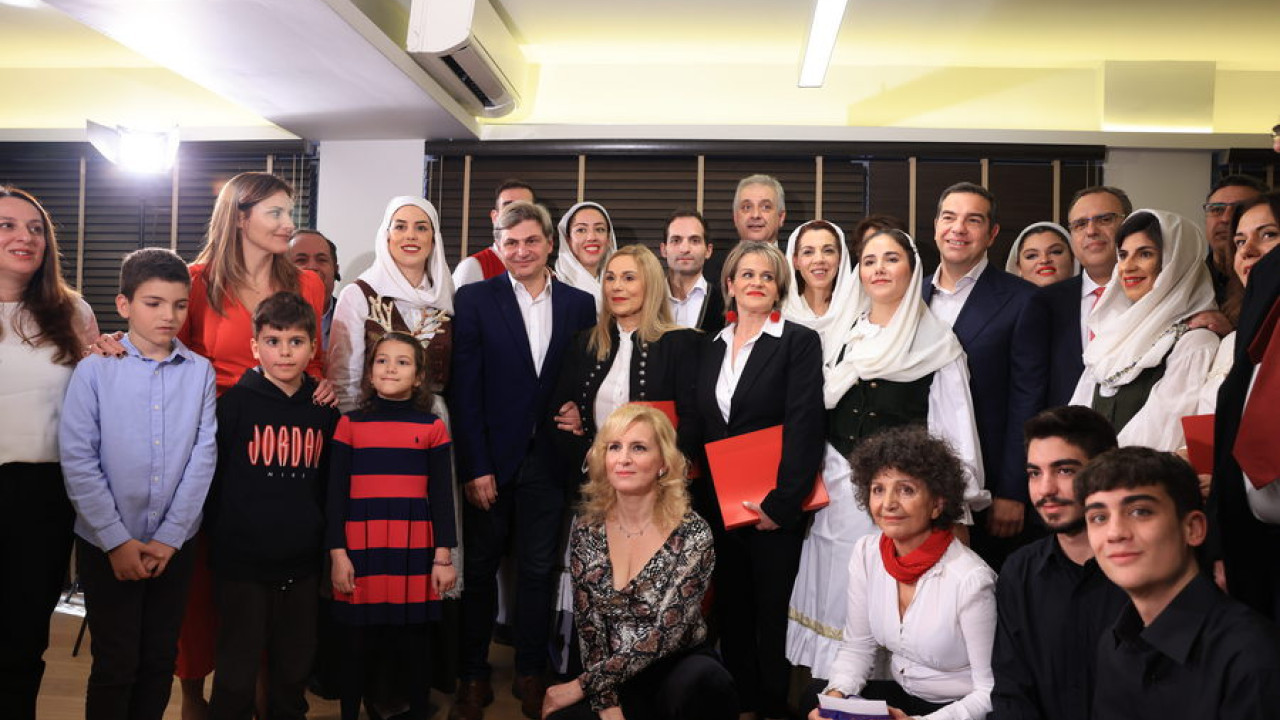 The vice-president of Omonia gave the president of SYRIZA-PS a green shirt of the P.A.O. of Phoenician with the last name of Mr. Tsipras printed and the number 28

Traditional Christmas carols were heard by Alexis Tsipras and his partner Betty Bazianaas the president of SYRIZA – Progressive Alliance, welcomed to the party’s offices the Brotherhood of Kefalonia and Ithaca Piraeus and North Epirus Associations under the auspices of the Democratic Union of the National Greek Minority – OMONIA.

Mr. Tsipras and his partner distributed and received gifts and exchanged wishes with the members of the clubs. “It’s the first time I hear your carols, they are very nice, of course you have a tradition in the arts in the Ionian Islands”, said Mr. Tsipras after hearing the carols from the Brotherhood of Kefallinians and Ithacaians of Piraeus. Then the members of the club danced a traditional Kefalonian Ball. “Good evening lords” was then sung by the young children from the North Epirus Associations under the auspices of the Democratic Union of the National Greek Minority – OMONIA. The children danced a traditional dance to the sound of the clarinet. The vice-president of Omonia presented the president of SYRIZA PS with a green jersey of the Phoenicians Cultural Sports Club (P.A.O. Phoenicians) with the surname of Mr. Tsipras and the number 28 printed on it.

Al. Tsipras: “I would not be able to accept, without the minority issues having progressed, to organize fiestas”

In addition, in a short dialogue that they had in front of the cameras the vice president George Tzomakas, on behalf of the president of Omonia, invited Mr. Tsipras to officially visit Northern Epirus. “For the situation in Northern Epirus, not much or almost nothing has changed since that day when you made that important statement in Bucharest (as in the quadripartite Greece-Bulgaria-Serbia-Romania, on March 29, 2019),” said Mr. Tzomakas.

“I know that,” said Alexis Tsipras, “and one of the reasons I didn’t accept my friend Edi Rama’s invitation was because I would never have been able to accept, without the minority issues having progressed, organizing fiestas.” He noted that “Albania’s European path must be combined with very important steps in the matter of rights, human rights and of course the property issue of the Greek minority, because human rights and the EU go together, they are not two separate things. And we will support the neighboring country in its choice if, of course, it too is consistent with the principles and values ​​of the EU”.

Facebook
Twitter
Pinterest
WhatsApp
Previous article
A 41-year-old man was arrested for thefts in jewelry stores
Next article
Opinion – Tostão: Isn’t it time to have a different coach? One option would be Fernando Diniz