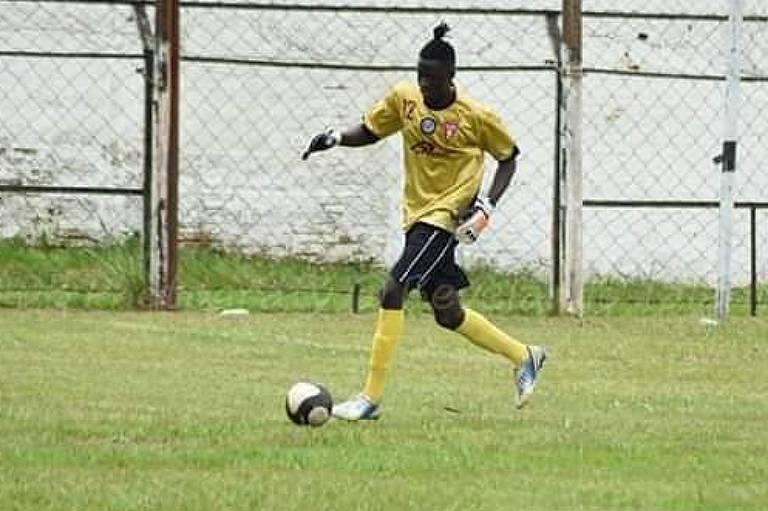 Abdu Cassamá, 29, often says he has two idols. The first is his older brother, Malam, 32, from whom he inherited a fondness for playing football. The second is the German Manuel Neuer, his inspiration as a goalkeeper.

It was mainly because of the two of them that he left one of the small islands of the Bijagós archipelago, in Guinea-Bissau, to migrate to Brazil in 2018, in search of a professional opportunity.

“In 2005, my brother was here playing with our national team. When he returned to our country, I realized that I could also play like him and be a professional player,” Abdu tells Sheet.

If he stayed in the small African country, he believes he would not have as many opportunities to have a career in the sport. “That’s why I decided to come here.”

Located in the western part of the African continent, Guinea-Bissau is a country of about 2 million inhabitants, according to data from Our World In Data. In the UN (United Nations) HDI (Human Development Index), it ranks 177 out of a total of 191 nations on the list.

According to a report by the World Food Program, also from the UN, almost three out of every four people in the Guinean population do not have access to an energy diet due to the country’s high levels of poverty. According to the study, the local food system lacks affordable nutritious food.

About 50% of the rice consumed, for example, is imported, and almost all of the fish is exported, resulting in “limited availability of nutrient-dense foods to the local population”, the report says.

The former Portuguese colony has suffered from the effects of instability since its independence in 1974. In the last 50 years, there have been at least nine military coups or attempts. Added to this is the endemic corruption in the country, considered a center for cocaine trafficking between Latin America and Europe.

Abdu knows this reality. He doesn’t like to criticize the situation in the country, but he recognizes that he left it to have a better life. “When you don’t have that security within your family, you look for another path, another country where you will feel safer, more stabilized”, he says.

In Brazil, which the Guinean considers “a country full of opportunities to work and study”, he has football as his main objective. “My big dream is to be a professional player”, likes to emphasize the athlete, finalist of the Refugee Cup, disputed between Guinea-Bissau and the Benin team, this Sunday (15), at Centro Esportivo de Pirituba, in São Paulo.

Praised for his participation throughout the tournament, the goalkeeper was unable to hold off Benin’s attack, which reached the title with a 3-1 victory. Chidiebere Osuagwu, Mmaduabuchi Stanley Nbagwu and Daniel Eze scored the goals that decided the championship, but did not they discouraged Abdu.

In addition to playing in the tournament for refugees from his country, he plays for Guerreiros do Gordinho FC, a lowland team in the municipality of Jandira, in the metropolitan region of São Paulo. It was the way he found to stay active while waiting for a chance on a professional team.

“Football is everything to me”, says the goalkeeper, who prides himself on knowing how to play with his feet: “Like my idol, Manuel Neuer”.

While waiting for the chance to follow the famous German goalkeeper’s path, Abdu has a plan B. He is preparing to become a teacher.

He is currently studying the last semester of the pedagogy course, focusing on mathematics. In her course conclusion project, she is developing a dissertation on games and games as a teaching tool in early childhood education.

“Since I was little I was always good with numbers. And I learned a lot about it with a game called seven stones, which I played”, he says.

Basically, the object of the game is to build a pile of seven stones during a dispute between two teams. With each play, a team has a chance to knock down the opponent’s stack with a ball. “With this game, for example, the child can learn a little more about mathematics.”

The Guinean is looking forward to his graduation. First, because one of his sisters will have to travel to Brazil to attend the ceremony. But also because it has not been easy to be able to reconcile studies with his other activities.

In addition to playing football, Abdu works as a stocker in a store, from Monday to Saturday. On Sundays, he still finds time to teach kizomba, a dance style originating in Angola.

“It’s a lot to be able to take it all together. I have to work hard to be able to do all these activities”, he admits. “But it’s worth it, especially for football.”