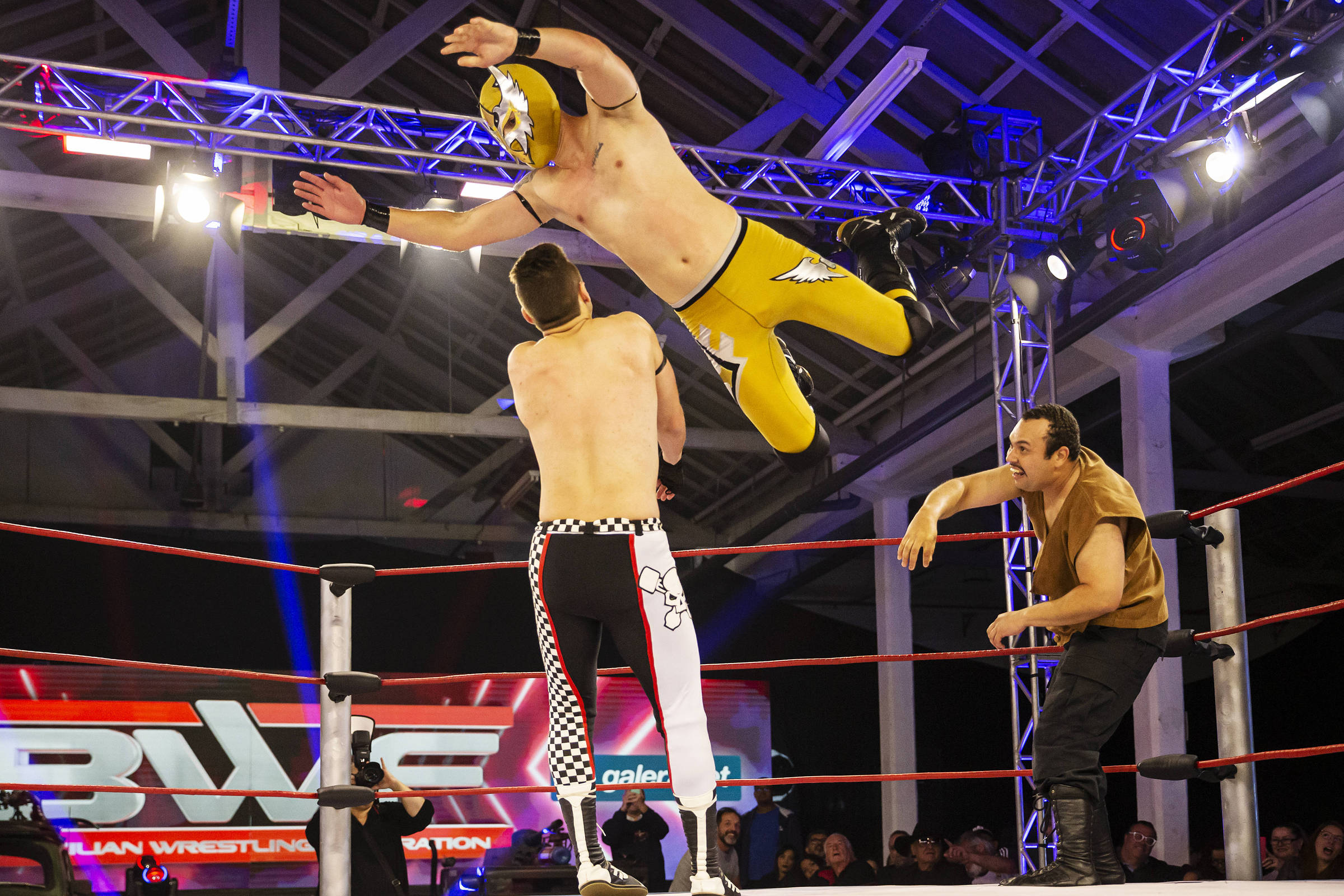 The parking lot is not the ideal space, but Tobias Correa Neto, 29, has a lively conversation with Gabriel Gonçalves, 26. They both draw up plans, determine who is going to do what. They simulate blows and define how everything will end up inside the ring set up in Mooca, east side of São Paulo.

“Whenever I go to a fight, I don’t have any problems in life anymore. It’s someone else who is there, not me. It’s a very good thing. People buy into the idea of ​​a story I want to tell,” says Tobias.

He is so out of his mind that when he steps up in the hexagonal ring of the BWF (Brazilian Wrestling Federation), he is no longer Tobias. He is Toko the Infernal. Gabriel becomes Acce.

For years, between the 1970s and 1980s, wrestling, in Brazil also called Telecatch, was a craze in the country. Characters like Ted Boy Marino and Fantomas were seen as heroes. Achilles was a villain who could not take to the streets at the risk of being beaten by the public.

A pop culture phenomenon in the United States, American wrestling is on TV with shows from WWE (Disney group channels) and its rival, AEW (Turner group). With its shares traded on the New York Stock Exchange, WWE is a company with a market value of US$ 5 billion (about R$ 26 billion at the current price).

The popularity of these shows was what Bob Leo Jr., 51, had been hoping for years. CEO of the BWF, he wanted to put national events back on television. He signed a deal with Bandsports for the broadcast, every Friday at 11:45 pm, of BWF Telecatch.

“It’s a laboratory to show people that wrestling exists in Brazil. We have a list of 60 athletes and we train 10 to 15 new ones a year”, estimates he, son of Bob Leo, a legendary name in the national Telecatch.

One of the graduates is physical therapist Arthur Godoy, 29, known as Thuro Thuro. While other fighters combine moves and chat about the fight script, he’s sitting in a corner, hurriedly putting on his makeup.

“In the ring, I’m an exaggerated version of myself,” he says. “I like to entertain people, the adrenaline of being in the ring. I like to hear people scream. It also serves to inspire, to show inclusion. Winning or losing the fight is irrelevant. It’s interesting to entertain.”

Thuro Thuro is part of the LGBTQIA+ community that participates in BWF events. The irrelevance of the result is because, as anyone who follows knows, the fights are choreographed, and the final results, combined. There was, in the past, the concern to hide this. Of trying to show it to be something real. Today, no more.

The concept is “entertainment sport”. An athletic and sports show to entertain the audience. The idea is to make people immerse themselves in a story. Like in a movie.

“Wrestling is full of moments. I love cinema, but I never wanted to be an actor. Wrestling was something I had to be. It’s something you live intensely”, confesses Acce. Invited by an English company, he spent just over two weeks touring the UK. He did 20 fights in 10 days.

There is not even the concern of escaping the criticism that it is a “marmalade” any longer. The idea is to show that it is another type of sport, not competition.

“It doesn’t offend me at all when people say it’s marmalade. It’s entertainment. I always say to people when I hear this: do you think it’s easy? Do you want to try it?”, asks Roberto Piovesan, 33, Rurik Jr.

Son of Diabo Loiro, another historic character in national wrestling, Piovesan, with other Brazilians, tested in WWE in 2019. He was one of those approved, but the Covid-19 pandemic, which arrived the following year, got in the way of plans.

Because of cost, recordings are maximized. In just one event, like the one held last month at Mooca, three programs are made to be shown by Bandsports. The undisguised inspiration is the American model, with the creation of rivalries, the acrobatic moves and the post-fight “interviews”. And this is another important component: it is necessary to know how to speak, to have charisma.

“I hired a drama teacher to teach our fighters,” says Bob Leo Jr.

In a space where there are snack bars, bars with birthday parties and live music, the BWF event needs to compete for attention. Bob has to run out at some point to ask the engine of an accelerating car to be turned off so the sound doesn’t come out in the program. Gradually, people who are in other places stop to watch and enter. Especially children.

A driving force that makes everything possible at the BWF, the owner runs to add more chairs. He rented 500, but estimates that 700 people were present.

“Our mission is to show that it’s a show. Nobody needs to believe it’s real, they just need to get into the story, the entertainment we want to show”, says Rurik Jr.

It is not accepted to say that it is not sport. For them, the athletic condition and strength required show that it is. And it’s not just the fighters’ opinion, but their family members’ opinion. Some support, others are afraid.

“My dad doesn’t like it because he says I might get hurt,” says Thuro Thuro, rolling his eyes in disbelief that this will happen. It really doesn’t. He leaves unharmed.

Tolo’s mother the Infernal even trained with him. She wanted to be a judge, actually. But she dislocated her shoulder and gave up.

“Wrestling brings people together, everyone helps each other, families participate…”, says Rurik Jr, hands in his pockets to protect himself from the freezing wind in the parking lot that also serves as a locker room. He stops because a car arrives, honking its horn.

“It’s my wife! She came to bring the clothes I wear in the ring”, he adds.

Minutes later, she is in the audience, applauding the good guys and booing the fighters who play the role of villains, with 699 other people.

Facebook
Twitter
Pinterest
WhatsApp
Previous article
Astronaut Scott Kelly and 15 other experts on NASA’s UFO study team
Next article
The Ukrainians are arriving in the city of Kherson: the Russians are speeding up the evacuation of civilians – Fighting in the Donbass as well