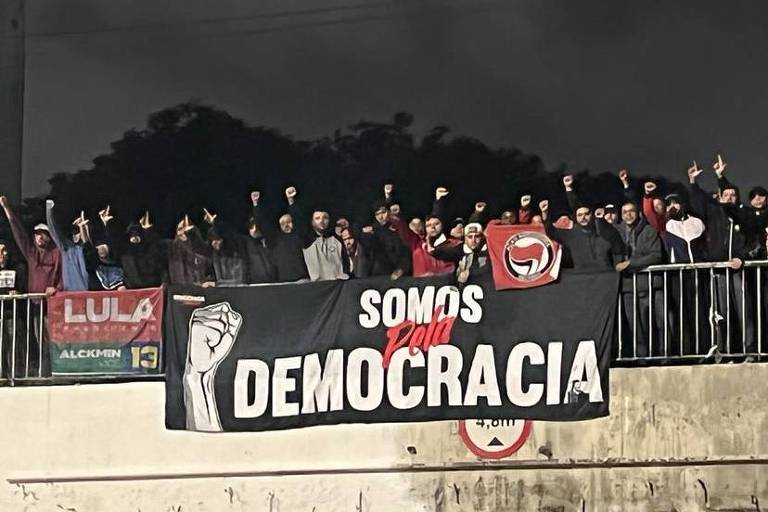 Corinthians fans disperse scammers on the Tietê marginal in SP

A group of 70 Corinthians fans dispersed coup supporters of President Jair Bolsonaro (PL) who were blocking a stretch of the Tietê marginal, at the height of Ponte das Bandeiras, on Tuesday night (1st).

Videos released by fans show cars of Bolsonaristas rushing out of the place after the arrival of the group called Somos Democracia. Corinthians plays today, against Flamengo, at 21:30, in Rio de Janeiro.

“It is important to say that it was not an isolated action. In recent years we have had an expansion of awareness and greater participation of young people in political processes,” said Danilo Bird, one of the group’s spokespersons. “Today we understand that it was important to demonstrate that there are people willing to defend the will of the majority of the people who expressed themselves at the polls last Sunday”.

There was no confrontation between the parties. The group of coup plotters left the marginal as soon as the Corinthians arrived.

The group’s objective was to act in Castello Branco, but the decision to change the route was taken because of the existence of children at the roadblock.

“The great truth is that we would really like the State institutions to be functioning”, said Pássaro. “This should be the role of the public security forces. If it were us blocking roads, the answer would be different”.

Another dispersion carried out by Corinthians took place in Francisco Morato, in the metropolitan region of São Paulo. “There will be no mess here”, says a fan in a video right after the action.

Also this Tuesday, the organized crowd Galoucura, from Atlético Mineiro, broke through the blockade organized by scammers on the BR-381 highway, in Minas Gerais.

The fans were on their way to São Paulo for the match at Morumbi, against São Paulo, for the Brazilian Championship.