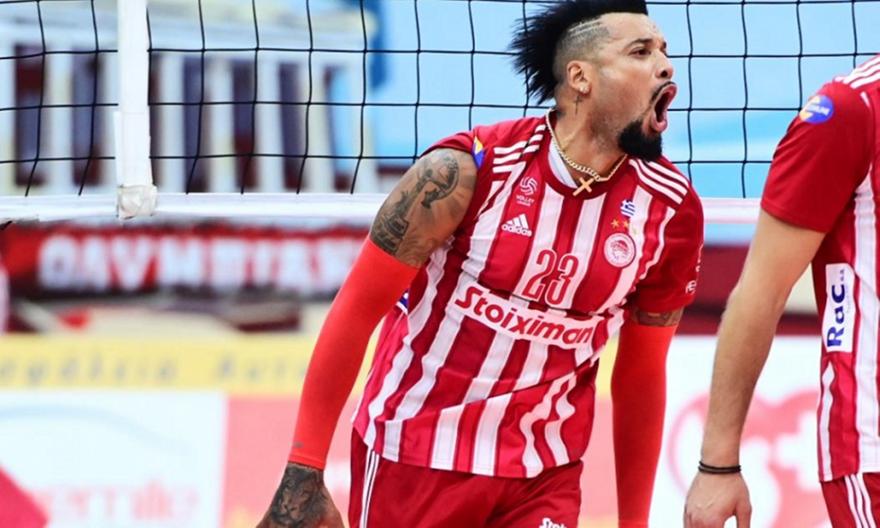 Hidalgo on sport-fm.gr: “Our crowd gave us a boost, we are very happy for qualifying”

THE Salvador Hidalgo and Demosthenes Linardosthey spoke to sport-fm.gr for the second victory against Komarno with 3-0 set and his great qualification Olympiakou in his “16” phase Challenge Cup.

Both referred to the potential “attendance” of the people at the “Melina Merkouri” indoor gym, but also to the preservation of invincibility of Olympiakos in Greece and Europe. Among others, the Greek central player of his team Alberto Giulianiset the goal of the continuation of the good performances while also referring to her upcoming derby 7th matchday of the Volley League on November 26 at the indoor of Agios Thomas, with Panathinaikos.

In detail what they said to sport-fm.gr and Giorgos Zachariou:

For the match and qualification: “We played excellently. In the first set we destroyed their game completely, but in the second we relaxed as the difference from the first affected us, but the most important thing is that we went to the next stage.

The guys who came in the third set helped a lot and played like they were the starters. We got a lot of solutions from the bench. We all played extremely well and were very focused. We are happy to face good teams in the next round of the Challenge Cup.”

To support the world: “They were great and a lot of ‘ups’. When I went to the service line and the game got tough, especially in the second set when we weren’t going too well, they were on top to support me. I hope in the future we can play to full stadiums, and I know that for that to happen we will have to play well and it will be great to have the fans there to support us.”

“It was a very difficult game and a lot of concentration was needed as we had to be the ones to come in determined to achieve our goal and continue to the next phase. We have a difficult continuation, since next week is the derby with Panathinaikos, which is a very good team, and I believe that if we continue at this rate, the desired results will come, which are victories.”

For the second set that Komarno pressured Olympiakos: “It’s normal when you win the first set by a big margin, to enter the second set somewhat unfocused. The point is that in the end, our experience, concentration and passion spoke and we got the qualification. We were all happy because there was also a rotation and a very important and clean victory came.”

For the support of the people he said: “We thank those who were here tonight even though it is a weekday, and in general for their support in this huge effort we are making.

It’s a very beautiful feeling, going out for warm-ups to see a full stadium and take the pulse of the stands. Whether we compete in Greece or outside Greece, the stadiums are full, and that is very good. Both for the sport and for the young children we inspire to take up the sport.”

For the goals of Olympiakos: “We only look at the wins. We do not look at who the opponent is and what name he carries. We try to respect everyone as this helps us stay focused and give our best to reach victory.”

Finally, Dimosthenis Linardos spoke about the next game of Olympiakos against Pegasos Polichnis, which will be held at the Rentis stadium on November 19 for the 6th matchday of the Volley League.

“They are a very good team and in Polichni they love volleyball and I know this because I have played there. They will come here to play against us, they have nothing to lose, we also saw it in Orestiada. We have to be focused and win, so that we can then properly prepare for the big derby with Panathinaikos.”