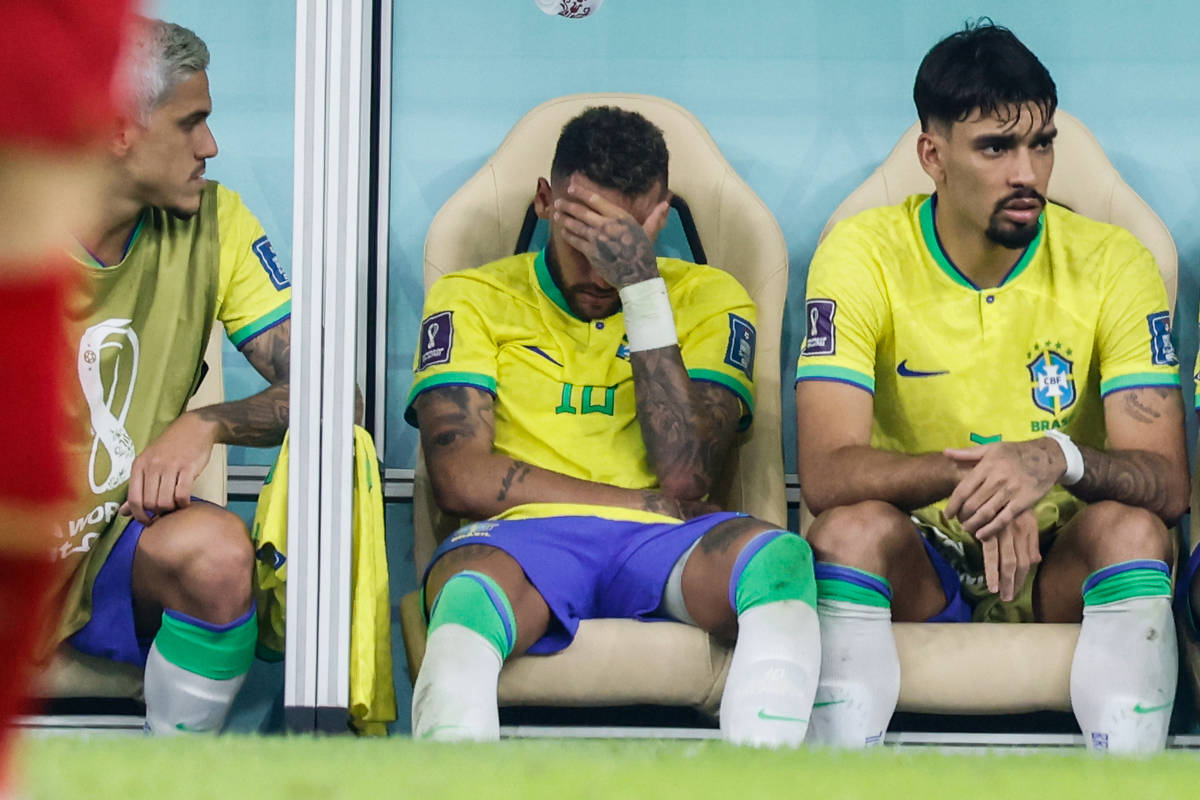 Doctor cheers up Neymar, who suffers from a history of recent injuries

Neymar arrived dejected at the Westin Doha Hotel, where the Brazilian team is staying in Qatar, but heard from the Brazilian team doctor, Rodrigo Lasmar, that the trend is that, in the worst case scenario, he will return to play in the round of 16 of the World Cup World. There will only be certainty about the prognosis, however, after the exams this Friday (25).

The player may undergo an MRI, which should help define the next steps in the treatment of the right ankle sprain suffered in Brazil’s debut with a 2-0 victory over Serbia, on Thursday (24), in Lusail.

The athlete’s father spoke to him this morning and felt his son excited and optimistic, according to the report. The player said that a movie played in his head about the injuries that hampered his career in the 2014 and 2018 World Cups.

Right after the match, despite the good Brazilian performance, there was an atmosphere of apprehension among the Brazilian athletes. Neymar was one of the last to leave the locker room towards the bus that took the team back to the camp.

He was wearing two black socks and sandals. He walked slowly, limping heavily and was accompanied by a CBF press officer and a security guard. Usually, when he doesn’t want to talk to the press, he just walks around with headphones on. This time, he asked the reporters present for understanding.

His face also reflected frustration. The injury joined a long list of physical problems that have plagued the star since 2017, when he left Barcelona for Paris Saint-Germain.

At the World Cup in Qatar, the injury came precisely at a time when he was preparing to leave that history behind and compete in the competition in his physical fullness, something that is uncertain at the moment.

According to Rodrigo Lasmar, he will be evaluated within 24 h to 48 h to find out the severity of the injury. However, his presence against Switzerland on Monday (28) is practically ruled out. Before the end of the first phase, Brazil still faces Cameroon, on Friday (2).

With the exception of the current season, in which he played 20 of PSG’s 22 matches before the break for the World Cup – he scored 15 goals and provided 12 assists –, the Brazilian has also been out of important games since his arrival in Paris, in the 2017 season. /18.

There were six serious injuries, which took him off the field in at least 66 matches for the team, adding the five seasons prior to the current one.

The most recent physical problem for the club was in November 2021, when he also injured his ankle. In this case, the left. He felt the injury in the final minutes of the match against Saint-Étienne, for the French Championship. He ended up sitting out 13 matches. He only returned to play in February of the following year.

The number represents a drop of 38% in his presence compared to the average number of games in Barcelona’s shirt. In four seasons in Catalonia, from 2013 to 2017, he played 186 duels, an average of 46.5 per matchday.

Members of Neymar’s staff, heard by the report in Qatar, said they understood that every player has an Achilles heel. In the case of shirt 10, it’s the ankle. In the last five years, there were four injuries, two on the left and two on the right, including the most recent one.

“Just as Ronaldo had his knee, Kaká his hip, Neymar suffers from his ankle. That’s why he has this injury recurrence”, commented a person close to the athlete, who is in Doha.

In June 2019, the playmaker had already suffered an injury to the same right ankle. At the time, he ended up cut from the Brazilian national team on the eve of the Copa America. There were three months of recovery.

Avoiding physical problems was already a concern for the Brazilian even before the start of the season. That’s why he showed up a week before the official start of PSG’s pre-season, in July.

Hence the frustration with the injury right at the opening of the Cup. “He’s never been so light in spirit since he arrived in Paris. He’s been light, calm, relieved, but in the end he’s been unlucky,” commented another member of his staff.

Despite being lighter spiritually and psychologically, Neymar has undergone a physical transformation in recent years, especially since he left Brazilian football in 2013. At that time, while wearing the Santos shirt, he maintained his weight at 64.5 kg. Now, with gains in muscle mass, he weighs 68 kg.

Professionals heard by Folha, however, believe that this change would not be related to the successive injuries.

“In Neymar’s specific case, he wouldn’t have much of a problem with this gain in muscle mass because he’s an athlete who has always been agile. And his ankle easily supports this weight gain, so I don’t see it as a problem for his joints”, commented physical trainer Walmir Cruz, who worked for eight years on Corinthians’ coaching staff, from 2009 to 2017.

The professional, who played alongside Tite at the São Paulo club for two seasons (2010-13 and 2015-16), periods in which he accumulated important tasks, such as keeping Ronaldo in shape during his time with the team, from 2009 to 2011, believes that the problem faced by Neymar has more to do with the attitude of opponents.

“Unfortunately, one of the opponents’ weapons is precisely to stop Neymar with free kicks from above, from below, in any way possible”, said Walmir.

In fact, the Brazilian was the most hunted player in the first round of the World Cup group stage. He was fouled nine times. Gavi from Spain is second on this list with five.

At the Russia World Cup in 2018, Neymar was also the player who suffered the most fouls in the competition, with 26 in the five games he played.

Four years earlier, he had already suffered what was perhaps the toughest foul of his career, when he received a knee in the back from Colombian Zúñiga and ended up leaving the World Cup in Brazil in the quarterfinals. Without him, the team led by Luiz Felipe Scolari ended up defeated by 7-1 by Germany in the next phase.

Tite, however, is confident that he will still be able to count on the athlete. Not knowing when he will have him available again, the coach said he does not think about the possibility of having to cut him from the squad.