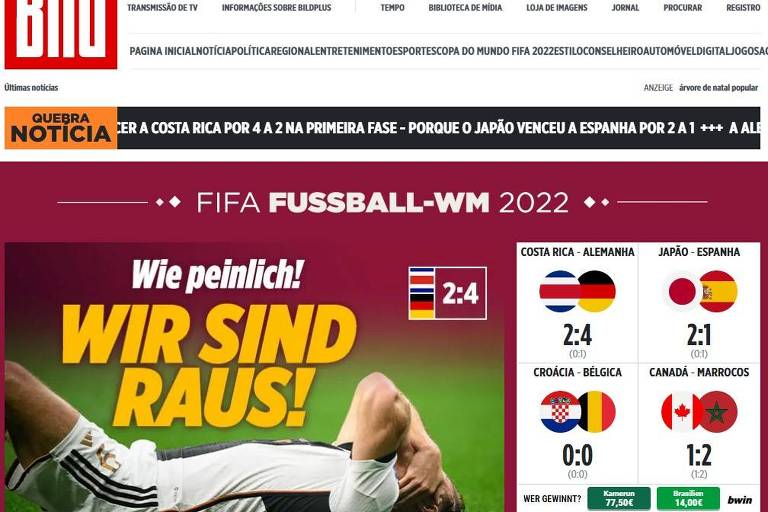 Germany’s second consecutive elimination from the World Cup group stage went down like a bombshell in the local press. The main newspaper in the country, Bild, published on its portal a photo of striker Füllkrug lying on the ground, with his arms covering his face and the headline: “How embarrassing! We are out!”.

In the text of the decisive match against Costa Rica, the article pointed out that even the 4-2 victory over Costa Rica this Thursday (1st) was not enough to guarantee qualification for the round of 16, since Japan defeated Spain 2-1.

“Germany football is on the ground. Finally. For the second time in a row, Germany crashed out of the group stage of a World Cup. The bitter record: an embarrassing defeat against Japan, a strong draw against Spain and a resounding victory against Costa Rica”, analyzed the text, which continued to highlight the decline of four-time world champion football.

In the end, the text still remembered the elimination of the Germans to England in the round of 16 of the Euro 2021, by 2 to 0. Another result lamented by the fans.

“Three tournaments in a row in which we won nothing. The world of football trembled before us. As a ‘tournament team’, we were praised. Now Germany is just a football dwarf”, concluded the report.

Der Spiegel magazine noted that Germany “had more chances to score than any other team – and failed”. The headline was: “A few millimeters, and still miles away from the best in the world”.

At Welt, the headline was for the ball decided by VAR in Japan’s victory over Spain. “Ball out or not? Millimeters decided the elimination of Germany.

In another headline, the site splashed: “It’s over after the preliminary round – the German disaster is sealed”.

Morgenpost noted that the disaster was perfect: “Germany is eliminated”.

Tagesspiegel did not spare coach Flick: “Flick is not innocent. The obvious problems have been with the German FA team for a long time.”

The Franfurter Allgemeine only headlined “The next fall”, but in the text highlighted the performance of striker Jamal Musiala, whom they called “A ray of hope”. “A 19-year-old cannot carry the burden of German football alone. However, Jamal Musiala remains a glimmer of hope.”