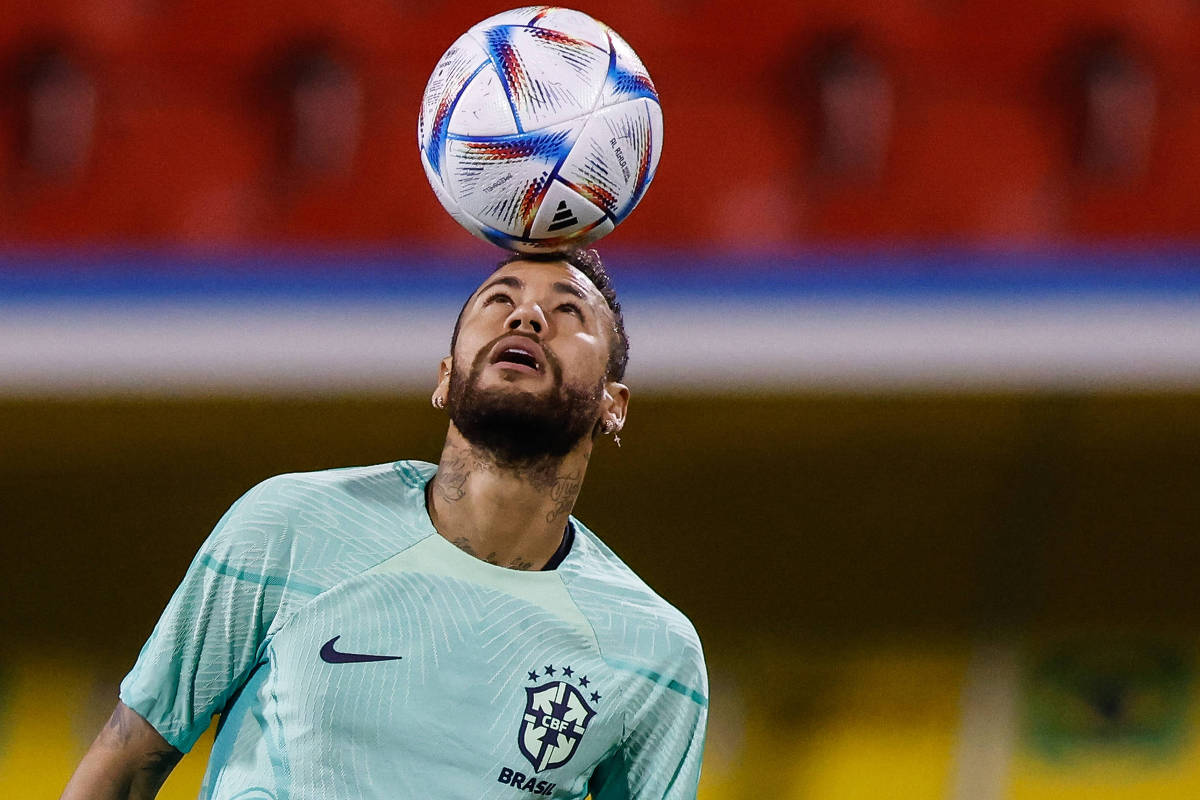 The 6:30 pm prayers were broadcast over the loudspeakers of the nearby mosque and echoed in the Grand Hamad Stadium in Doha as Neymar started to run after the ball.

It was just a fool’s game, but it was the key for the attacker to climb (as Tite likes to say) to play in the round of 16 of the World Cup.

Three hours earlier, the coach had said that training was a condition for the Brazilian star to face South Korea this Monday, at 4 pm (Brasília time), at Estádio 974.

The number 10 suffered an injury to his right ankle on his debut against Serbia. He underwent treatment for three periods, he didn’t even go to the stadium in the victory over Switzerland, he used cryotherapy, a treatment that uses nitrogen to cool the body, to speed up recovery. He had optimism that he would return in the round of 16, then feared not playing. Anyway, he received the news that he could return to training with the ball.

Without him, the team beat Switzerland and lost to Cameroon. Since 1998, Brazil has not been defeated in a World Cup group stage match.

Aware that he was the most expected name, Neymar was the last to enter the field this Sunday. The press was released to follow only the first 15 minutes. The player participated in the silly, ran without apparent restrictions and had fun with something he heard from Thiago Silva, the same defender who had said little that the team had gained a new life in the World Cup after the setback against the Africans.

He referred to the defeats in the quarterfinals in South Africa (to Holland) and Russia (Belgium) and in the 7-1 against Germany in the Mineirão, for the semifinal.

After the bobinho wheel, Neymar participated in a zigzag start activity. Everyone was present, but physical trainer Fabio Mahseredjian shouted the name of only the attacker, wanting his maximum commitment. As a way of making sure everything was fine, Neymar reacted with the same effort as the others.

It’s a relief for the Brazilian fans and for Tite. But it doesn’t compare to what Neymar feels. It is the third World Cup in which he suffers from physical problems or injury. His 2014 campaign was cut short by a spinal injury in the quarterfinals against Colombia. In Russia, in 2018, he arrived still recovering from a fissure in the metatarsal of his right foot.

Injuries became a drama for Brazil in Qatar. Before the Worlds, Tite was unable to call up Guilherme Arana, who underwent knee surgery. Already in Doha, he had the bruises of Neymar, Danilo (ankle) and Alex Sandro (muscular overload in the leg). Gabriel Jesus and Alex Telles (knee) will no longer play in the Cup and cannot be replaced by new players. This means that the selection goes until the end of the tournament with only 24 subscribers.

Neymar will not be the only novelty. Danilo is also recovered and will play. Not on the right side, the role you feel most comfortable with. He goes on the left to make up for the absences of Alex Sandro (still vetoed) and Alex Telles.

“I play on both sides, in midfield and as a defender. In all positions I feel very comfortable,” said Danilo in an interview with Folha this year. He will have the chance to show that this Monday with the yellow jersey.

This causes Tite to place athletes outside their original roles on both wings. On the right, with the shift of Danilo to the left-handed side, defender Militão will be chosen. Daniel Alves was the choice against Cameroon, a match in which the coach decided to field the reserves.

The physical issue became such a nuisance that Tite was irritated by published news that the coaching staff knew that Gabriel Jesus had knee pain and he was chosen anyway.

“At no time here in the national team did we pay the price of victory with an athlete’s health. The haters… That’s what it’s called, right? The haters keep spreading it… Go take care of something else and stop spreading lies”, asked Tite.

All of that took a back seat when Thiago Silva was asked if Neymar would play and the coach anticipated: