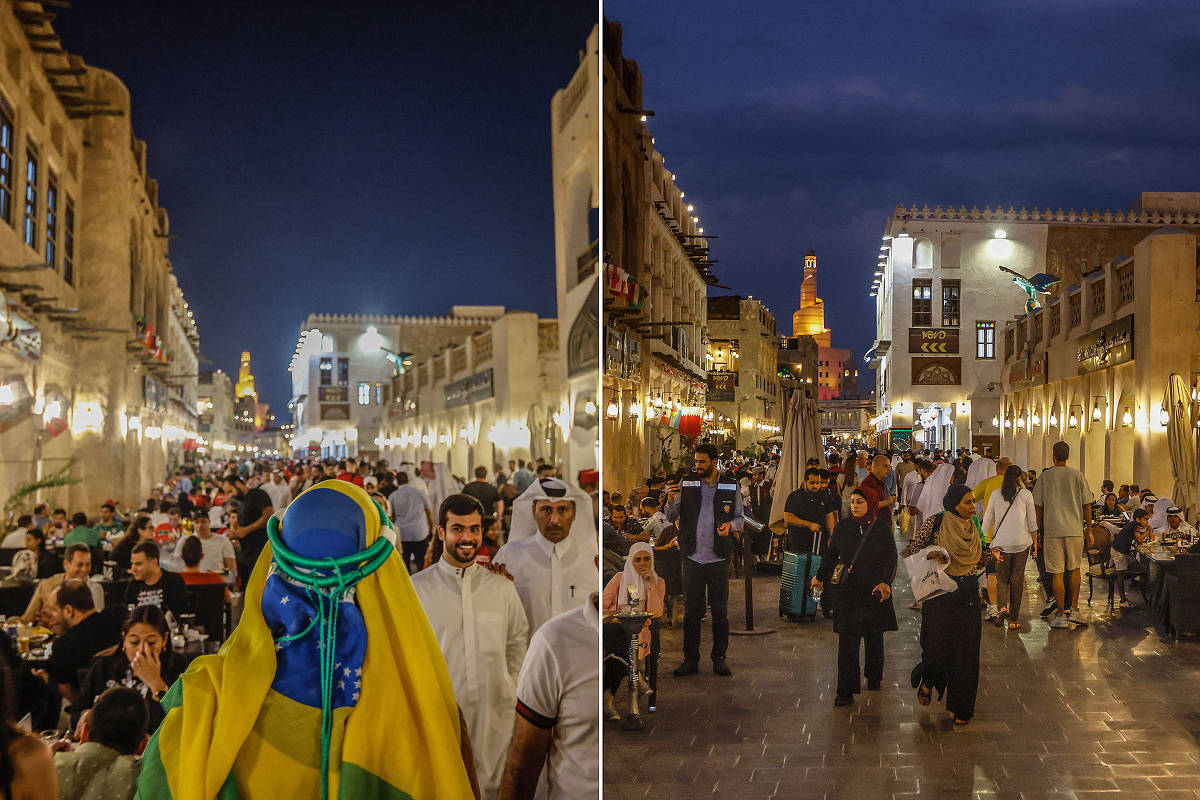 End of group stage empties streets and shops in Qatar

The end of the group stage of the World Cup in Qatar has emptied the streets of Doha, the country’s capital, where most of the stadiums are located and where tourists gather to celebrate, sleep and spend.

If before it was difficult to walk around the main sights of the city even outside peak hours, the advance of the championship brought a calm rhythm for the fans who stayed in the country to accompany the teams that are still in dispute.

The World Cup started with 32 participating countries, but after the group stage, 16 teams advanced to the round of 16. The next games, already in the quarterfinals, have only eight teams: Brazil, Argentina, Portugal, Holland, England, France, Morocco and Croatia.

Qatar streets before and after

After the group stage, with the elimination of 16 teams, streets and businesses were much less crowded. In the first photo, Souq Waquif, in the center of Doha, on the 23rd of November; in the second photo, the same place on the 7th of December – Gabriela Biló/Folhapress

From November 20th to December 6th, the country experienced a football overdose. There were 56 games in 17 days. Now, from December 9th to 18th, there will be eight matches in 12 days.

Fan screams are still heard, but before they were more commonplace. When walking through the center of the city, in a few steps you could hear several fans. Today, listening to any of them is a little less common. If the team was eliminated from contention, it is almost rare.

Cameroonian Hippolyte Kamdem, 48, arrived at the World Cup days before the start of the championship and will stay in the country until the end. He feels a difference on the streets as he advances towards the end of the group stage. He sees the city emptier, although he knows it’s a common trend in championships.

Kamdem says that the quieter time, with fewer people on the streets, is an opportunity to rest. “Take the opportunity to eat your food in peace, enjoy yourself and feel Qatar in your body and soul”, he says.

In traditional restaurants in tourist regions, lines were often long. The end of the first phase allowed the waiters to breathe.

Waiting is no longer the norm, and even when there are no tables left, establishments are not crowded as before.

Shopkeepers see the movement decrease every day. While in the early days it was difficult to get into the souvenir shops, crowded with tourists balancing to not bump into an Iranian pottery or Turkish lamp and knock them to the ground, today the risk is less.

The aisles of stores are getting emptier every day. In Souq Waqif, an open-air market in the center of the city, for example, there are still more customers than usual, but nothing compared to the beginning of the World Cup, when you could barely walk.

Merchants say that the end of the first phase brought them the worst period of sales since the beginning of the Cup, but, even so, they profit more than before.

Key chains, fridge magnets, ceramics and traditional souvenirs from the region are some of the most popular items. Much of it, however, is “made in China”.