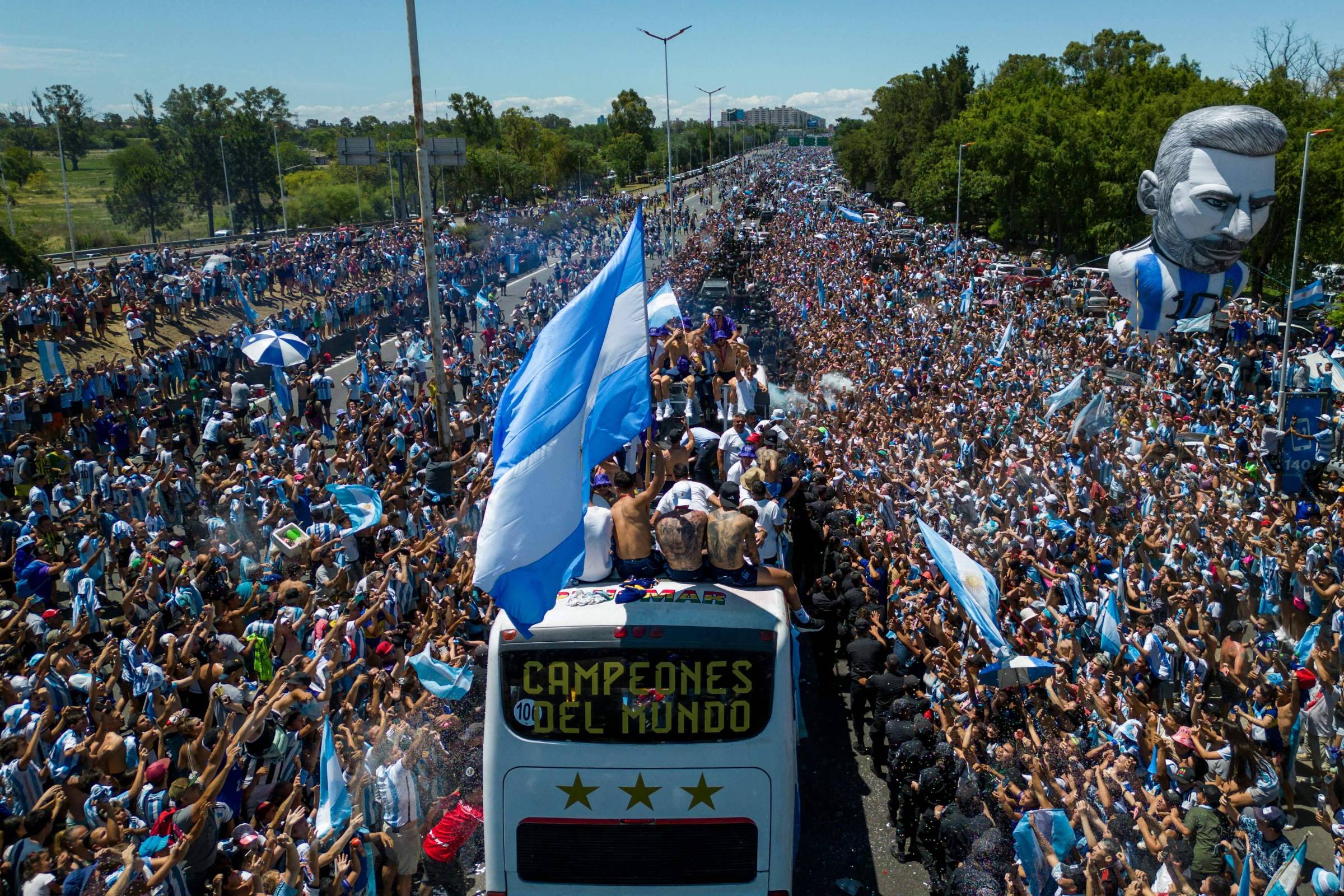 With millions of Argentines in the streets to celebrate the third football world championship, the organizers of the players’ parade had to change the route more than once and it is still not known exactly where the so-called “caravan of glory” will still pass this Tuesday. fair (20), in Buenos Aires.

The forecast was that coach Lionel Scaloni’s selection would leave the headquarters of the AFA (Argentine Football Association) around 12:30 pm and travel along the main roads until reaching Avenida Nove de Julho, where the Obelisk is located.

But, more than three hours after the start of the procession, the “scalonetas” walked only a few kilometers, due to the crowd accompanying the bus.

Every hour the local press released a new script. In one of them it was planned that the players would go to the Plaza de Mayo, since it is no longer possible or safe to reach the Obelisk, taken over by a horde of Messi fans and company.

With President Alberto Fernández expecting the players to pass through Plaza de Mayo, a platform with a sound system was set up in front of the Casa Rosada, seat of the Argentine government.

The idea would be a way to rescue players from the crowd, since the presidential palace has a helipad and at least three helicopters would be available to players.

The news spread and a crowd began to leave Avenida Nove de Julho towards Plaza de Mayo. Around 4 pm, there was a rush, with the possibility that the bus was arriving.

Another option disclosed by the local press would be to take them to Parque Roca, where there is a sports complex and there would also be helicopters waiting for the three-time world champions.

There is also information that they would only pass through the main avenues of Buenos Aires, as it was not safe for either the athletes or the crowd in the streets.

Even with the uncertainty, the fans continued to celebrate in the streets of the city. In Praça de Mayo, where four screens were installed, they followed the procession of the national team and had a picnic under the trees or on the sidewalks.

To contain the heat of more than 30°C, water jets were thrown at the fans, who never tired of singing that they were world champions.

“We’ll stay here all day, or until they [jogadores] arrive. maradona came here [na sacada da Casa Rosada], and Messi will come too. I’m sure,” said administrative assistant Luciana Tadeo, 44, who was accompanied by her husband, systems analyst José Valor, 41, and their son, Francisco, 5.

Foreign trade assistant Yamila Fernandez, 24, also intended to stay all day on the street for a party she never experienced, since it is the first time she has seen Argentina champion of the world – the other titles were in 1978 and 1986. “I want to be here to welcome the players.”

One last option suggested would be for the players, in helicopters, to greet the population from above, since it was impossible to circulate through the streets.