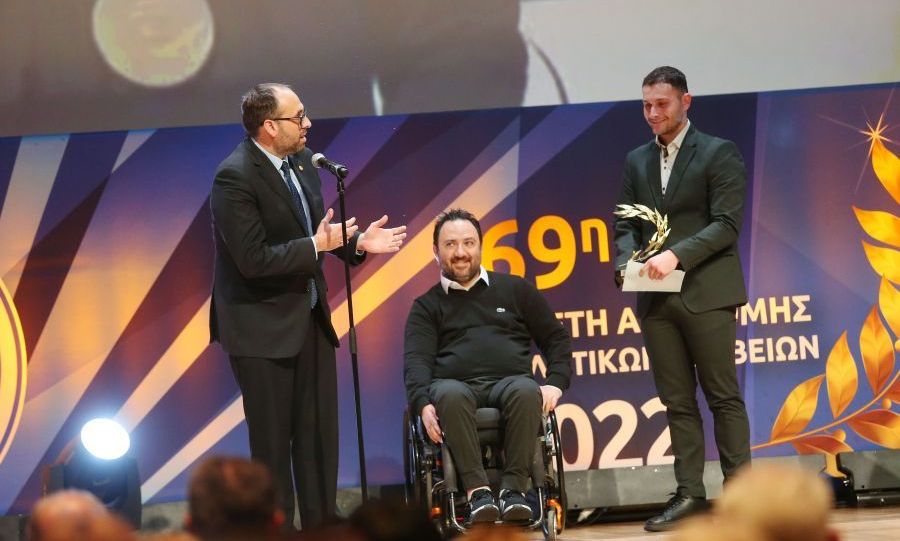 The special awards of PSAT

In addition to the main awards, PSAT honored many people in Greek sports in general during the award ceremony of the top 2022 on Tuesday at the Concert Hall.

Dimosthenis Michaletzakis was named a top athlete with a disability. In 2022, he was crowned world champion in the 100m. free S8 in Portugal, while he was second in the 100m. mixed individual SM8, but also the 50m. free S8.

The leading athlete with a disability was Alexandra Stamatopoulou, who was crowned world champion in the 50m. category S4 backstroke.

The Deaf Women’s National Basketball Team emerged as the top team of athletes with disabilities for winning fourth place at the Olympic Games.

We also had a special award for the Pleuritou sisters (Margarita, Eleftheria, Vasiliki), who are teammates in the Olympiacos women’s polo team. Margarita is the captain of the National team and representative to the FINA Athletes Committee, Eleftheria was named most valuable at the recent European Championship in Split, while Vasso is a key member of the representative group.

The ATHLI.S.Y Association was awarded for the successful organization of the Crete Half Marathon in Arkalochori.

We also had two honorary awards. The first was to Voula Patoulidou, who was awarded for completing thirty years since winning the gold medal at the Barcelona Olympics in the 100m hurdles.

The second one was for Pyrros Dimas, also, for completing 30 years since winning the gold medal in the Catalan capital at 83 kg of weightlifting.

Apostolos Christou was awarded for his outstanding performance in 2022. He was European champion in Rome in the 50m backstroke and second in the 10m in the Italian capital. He then won the bronze medal in the 100m at the European 25m Swimming Championships in Kazan, while at the World Championships in Budapest he was fifth in the 50m and 100m backstroke in event records.

PSAT awarded the family of the deceased Alexandros Nikolaidis, with the award being received by his wife, Dora Tsambazis.

Also, the “golden” taekwondo champion in 2000, Michalis Mourotsos, was awarded for his great contribution to sports, but also for his support to Alexandros Nikolaidis.

Artemis Ignatiou, who since 2008 has been the official choreographer and artistic director of the Touching and Handing of the Olympic Flame ceremonies, was also awarded.

Giorgos Kougioumtsidis was awarded, after on March 28 at the European Wrestling Championship in Budapest, he won the gold medal at 79 kg. A few weeks earlier, the 20-year-old wrestler was “gold” at the U23 European Championship in the same category in Bulgaria.

Also, the women’s football team of PAOK was awarded in the person of the 18-year-old center back, Maria Gouni-Papaioannou.

Haroula Dimitriou, who plays for women’s football not only on the field, but also as general secretary of PSAPP, was also awarded.

Irini Michailidis and Christoforos Polydorou, medalists at the European Games for Transplants and Blood Cleansers, were awarded, because they sent a message of will and strength with their example.

Finally, sports fan Giannis Anastasiou was awarded for his worldly behavior in the stands.