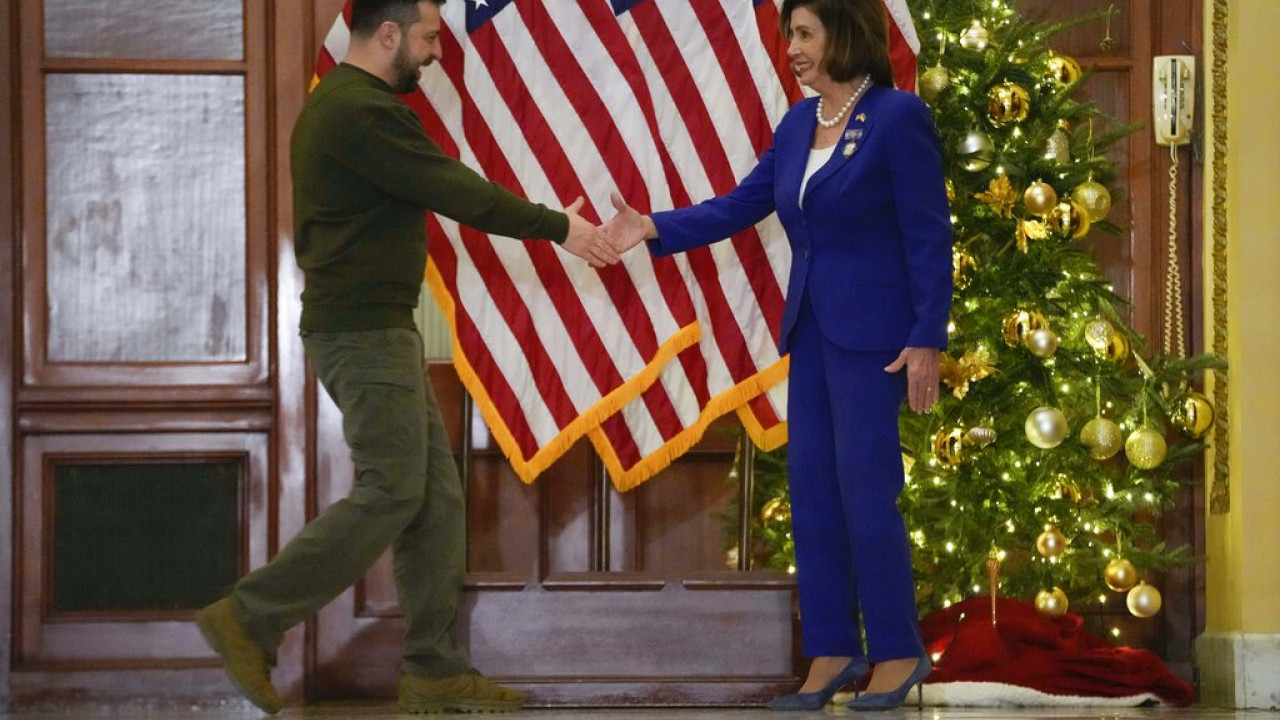 House Speaker Nancy Pelosi welcomed Volodymyr Zelensky to the US Capitol on Wednesday night as part of the Ukrainian president’s visit to Washington and shortly before his historic address to Congress.

Join His Excellency @ZelenskyyUa, President of Ukraine and me at the United States Capitol ahead of his address to a Joint Meeting of Congress. https://t.co/pdiEHGwKjP

It is my distinct privilege to welcome the President @ZelenskyyUa to the United States Capitol and reaffirm America’s commitment: we will stand with Ukraine in the fight for freedom until the war is won. pic.twitter.com/nQYARAk8iD

Earlier, US President Joe Biden and his Ukrainian counterpart Volodymyr Zelensky had a private meeting at the White House, while a little later they held a joint press conference, during which the new aid package to Ukraine was officially announced.

During the press conference, the US president emphasized that the US and Ukraine have been in close contact since the war began, but underlined that it was “especially good to meet up close and look each other in the eye”.

At the same time, he announced $1.85 billion in aid to Ukraine with war hardware, including Patriots and precision bombs, among other things.

The United States will continue to strengthen Ukraine’s defense capability, US President Joe Biden assured earlier in their meeting, welcoming his Ukrainian counterpart, Volodymyr Zelensky, to the White House.

The US president reiterated the need to reach a peace deal that would be “fair” to Kyiv.

For his part, the president of Ukraine expressed his gratitude to his American counterpart for the multibillion-dollar US military aid for his country to face the Russian invasion.

The United States will strengthen Ukraine with another package of military aid, estimated at $1.85 billion, as it was announced earlier by the head of American diplomacy, Anthony Blinken.

“It’s a great honor to be here,” Zelensky said upon his arrival at the White House, presenting a medal to Biden.

“The Ukrainians continue to impress the world,” commented the American president.

The president of Ukraine will later visit the Congress, where he will deliver a speech at 19:30 (local time, 02:30 Greek time).

This is Zelensky’s first visit abroad since Russia invaded Ukraine.

Zelensky presented a medal to Biden

A military medal was awarded by the President of Ukraine Volodymyr Zelensky to his American counterpart Joe Biden, as a sign of gratitude for the valuable US military assistance to his homeland.

As Zelensky told Biden, the particular medal was given to him the day before by a Ukrainian soldier fighting on the front lines, describing him as a “real hero.” He even noted that he was operating one of the US HIMARS multiple launch missile systems.

Ahead of his historic trip to the United States, the soldier told Zelensky to “Give this to the president,” as the Ukrainian president told Biden, handing him the medal in a velvet-lined case.

The US president accepted the medal, calling it a “great honor” and expressed a desire to reciprocate by offering the Ukrainian soldier an American medal from Iraq where his son, Beau Biden, had fought.

“You are the man of the year,” commented the US president, referring to Zelensky’s choice for the relevant cover of Time magazine.

US President Joe Biden said today he got the sense that his Ukrainian counterpart Volodymyr Zelensky was open to pursuing a “fair” peace deal to end the war, adding that Kremlin strongman Vladimir Putin had shown no sign of intent. to stop the war.

“You are open to pursuing a fair peace agreement,” Biden told Zelensky during a joint news conference the two leaders gave after their meeting at the White House.

However, Russian President Vladimir Putin “has not the slightest intention of stopping this brutal war,” added Joe Biden.

For his part, Volodymyr Zelensky clarified that a “fair” peace agreement means no compromise regarding the sovereignty and territorial integrity of Ukraine.

Facebook
Twitter
Pinterest
WhatsApp
Previous article
The special awards of PSAT
Next article
At the end of January, the European continuation for Bogoria of Gionis and Enebon of Sgouropoulos